by Mª Elena Jaime de Pablos. This text may be archived and redistributed both in electronic form and in hard copy, provided that the author and journal are properly cited and no fee is charged for access. 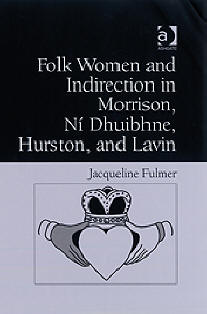 In the very first line of the first chapter of the book: “Impossible Stories for Impossible Conversations”, readers are told that the work “is concerned with the propulsion of story […] towards new ideas, even ideas we resist” (1). In it, Jacqueline Fulmer analyses the way prestigious African American and Irish women writers have presented volatile subjects to “unwilling audiences” in their countries of origin by means of indirection, a term employed “when rhetors [orators or teachers] wish to delay or obstruct their audience’s comprehension of their position on a subject, which may contradict that of the audience” (12).

The basis for tracing the line of descent from Hurston to Morrison and from Lavin to Ní Dhuibnhe lies precisely in the strategies of indirection they use to break down patriarchal discriminating assumptions, among them, the dichotomy of woman as either the “angel in the house” or the “monster”, a binary that dehumanizes her by placing her at the margins. The four writers consider references to folk traditions essential “to push the image of woman away from the edges, and into the center of human activity” (10). They draw on folklore to create “vivid, complicated, humorous, imperfect, self-aware female characters whose actions carry the stories and whose inner thoughts capture the readers’ sympathies” (10).

Fulmer distinguishes two categories of folkloric female characters: “the magical characters”, women who share features with non-human figures from the Otherworld: the sí, mermaids, selkies, witches, hags, or ghosts; and “the wise women”, who share features with more human-like folk figures from legends, folk tales, or religious oral traditions. These possess healing powers and privileged knowledge either mystical or magisterial.

Whether magical or magisterial, the folkloric female characters that the four authors depict in their short stories and novels insert controversy aimed at subverting some extreme of Otherness in ways that appeal to rather than ways that alienate readers through forms of rhetorical indirection that, Fulmer illustrates, were employed thousands of years ago by Jesus or  Aristotle.

In chapter two, “Rhetorial Indirection: Roots and Routes”, Fulmer defines and gives examples of strategies of indirection (ambiguity, metaphor, signifying, masking, sly civility, mimicry, exaggeration, double-voiced dialogue, and the use of the grotesque or bizarre, among others) as used by Hurston, Lavin, Morrison, and Ní Dhuibhne to tackle problematic issues such as colonialism, racism, sexism, religious prejudice, taboos, etc.

Their folkloric approach to indirection let them explore these unpopular topics by referring to proverbs, legends, tales, or other folk references. In subsequent chapters, Fulmer demonstrates how strategies with folkloric elements provide these four female authors cover from audience rejection while enabling them to communicate with audience members ready to receive new ideas. Thus, in chapter 3, “Folk Women versus the Authorities”, Fulmer presents folk-women characters by these authors who advocate civil rights and women’s rights by reworking binaries, reversing the western hero patterns, or disrupting stereotypes:  Nanny and Janie (in Hurston’s Their Eyes Were Watching God, Eyes), Mary O’Grady (in Lavin’s  Mary O’Grady),  Circe (in Morrison’s Song of Solomon), Jenny and Maggie (in Ní Dhuibhne’s The Bray House), etc. They all “offer model stories of women freeing themselves from the extremes of othering, binary images set upon them by dominant Anglo culture and sometimes by the men in their own culture” (53).

In the following chapter, “Otherworldly folk-women characters”, Fulmer examines the ways these writers employ indirection to avoid censorship when dealing with assumptions regarding marriage, sex, reproduction, abortion, infanticide and religious prejudices and practices.  Special attention is devoted to Hurston’s, Lavin’s, Morrison’s and Ní Dhuibhne’s figuring of the mermaid, an otherworldly female character often appearing in folklore doing things forbidden for human women, for instance, seducing men at will. The sex goddess Erzulie in Hurston’s Tell My Horse or the mermaid in Ní Dhuibhne’s “The mermaid legend” constitute two of the most representative cases.

Chapter five, “Reproducing Wise Women”, gathers instances where folk women in these four authors’ works function mostly as “wise women” who force readers into thinking about the discriminating sexual stereotypes associated with the passive and desexualised Virgin Mary. Marys, “anti-Marys” and folk culture midwives appear in their short stories and novels to dismantle the “virgin” versus “whore”, “flesh” versus “spirit”, “men” versus “women”, or “mother” versus “child” binaries:  Lavin’s Mary O’Grady (from Mary O’Grady) and Onny (from The House in Clewe Street), Ní Dhuibhne’s Jenny (from The Bray House), Hurston’s Erzulie (from Tell My Horse), Morrison’s Consolata (fromParadise), etc.

The last chapter, “Final Indirections”, offers some conclusions after having analysed the multilayered narratives of the African American and Irish female authors who seem to work in parallel to demolish the above/below binary of women in western literature. This is followed by an “Appendix: Correspondence with Éilís Ní Dhuibhne”, which brings together Ní Dhuibhne’s opinions about some of the topics dealt with in the book.

Without doubt, Folk Women and Indirection in Morrison, Ní Dhuibhne, Hurston, and Lavin accomplishes Fulmer’s goal of allowing readers to observe the effectiveness of folklore and indirection in helping these authors express their subaltern voices. Apart from being an enlightening work on feminist fiction, rhetoric, folklore, otherness and censorship, this book also stands as a significant contribution to the study of African American women writers and Irish women writers on the basis of comparative literature.