From Whence I Came: The Kennedy Legacy, Ireland, and America

From Whence I Came: The Kennedy Legacy, Ireland, and America

by Robert Collins. This text may be archived and redistributed both in electronic form and in hard copy, provided that the author and journal are properly cited and no fee is charged for access. 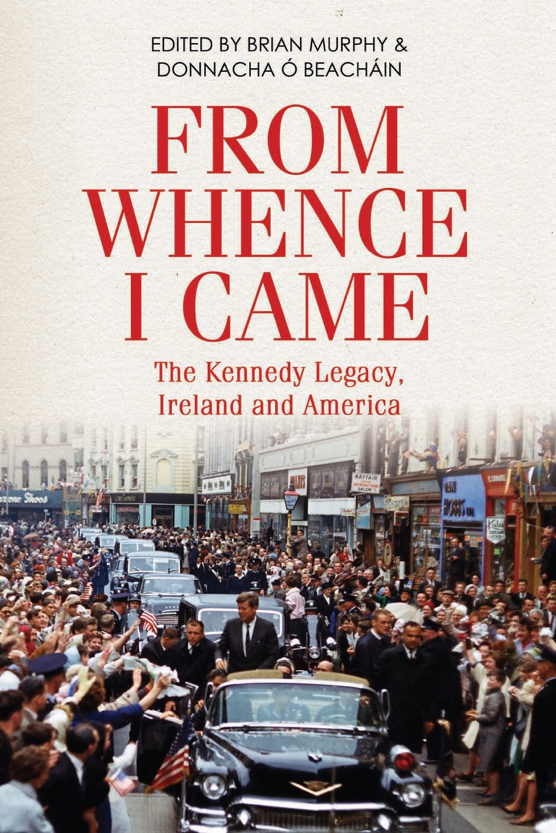 There is no denying the intense Irish interest in American politics and in particular, the race for the White House and the furore surrounding presidential campaigns. The contemporary elections of Barack Obama, Donald Trump, and Joe Biden have arguably been followed on Irish television screens even more intensely than Irish election results. Despite the enduring relationship between Ireland and the United States, interest in the presidency largely began with the election of John F. Kennedy on 8 November 1960. The victory of the first Irish Catholic president ensured a keen Irish interest, as well as the growing celebrity of the former senator from Massachusetts.

In this work, Murphy and Ó Beacháin explore this interest in an easy-to-read collection of essays that were mostly derived from papers presented at the Kennedy Summer School in New Ross, County Wexford. The diverse contributions range from a discussion of Bridget Kennedy, JFK’s great-grandmother, to contributions from a speechwriter and chief strategist who worked on the staffs of, respectively, Barack Obama and Bernie Sanders. Throughout the work, effective use of contemporary accounts provides valuable insights for any reader into the perceptions and motivations of the Kennedy family, their colleagues, and political opponents. The most obvious example of this is Ó Beacháin’s contribution on the various electoral victories of the 35th President of the United States. Similar in approach to his previous work From Partition to Brexit: The Irish Government and Northern Ireland, he cleverly documents the manoeuvres and meetings held to ensure JFK’s path to the presidency, alongside the importance of his father’s wealth.

For scholars particularly interested in the complex and nuanced relationship between Ireland and the United States in the twentieth century, contributions by Michael Kennedy, Mary Daly, and Alison Meagher, certainly enhance the existing literature. Michael Kennedy, Executive Editor of the significant Documents on Irish Foreign Policy Project, exploits the DIFP archive to demonstrate the limited involvement of President Roosevelt and Joseph Kennedy in the drafting of the 1938 Anglo-Irish Agreement. Joseph Kennedy, JFK’s father and US Ambassador to the UK, was appointed to the role in the same year but Michael Kennedy comes to the interesting conclusion that “no compelling evidence” exists that his appointment had any impact on the agreement and that “De Valera played the American card in hope rather than expectation” (38).

Daly discusses the changing Ireland-US relationship in the years preceding Kennedy’s presidential visit to Ireland in June 1963. One interesting insight in the essay is the assertion that Irish government policy on Northern Ireland moved away from a focus solely on partition to a more pragmatic approach. In doing so, it solidified the Irish approach that would largely dominate once conflict broke out in the late 1960s. Furthermore, Daly details the often-overlooked visit by Taoiseach Seán Lemass to the US in October 1963, just a month before Kennedy’s assassination in Dallas, as well as his feature on the cover of Time magazine a month after Kennedy’s June visit.

Meagher’s essay details the involvement of Senator Edward “Ted” Kennedy in attempting to mediate in the Northern Ireland conflict. Kennedy’s involvement in the so-called “Four Horsemen” alongside Hugh Carey, Thomas “Tip” O’Neill, and Daniel Patrick Moynihan arguably became his lasting legacy on the conflict. The piece could have been improved further with a meaningful discussion surrounding the importance of opposing groups such as Noraid and the Irish National Caucus, particularly in the aftermath of the 1981 Hunger Strikes. However, Meagher accurately points to the importance of John Hume in influencing Kennedy’s stance on the conflict. The relationship between Kennedy and Hume was the driving force behind the “Four Horsemen”, alongside Kennedy’s considerable clout within the Democratic party.

In addition to these valuable contributions to the existing historiography on Irish-US relations in the twentieth century are a number of personal accounts that provide fascinating insights into the workings of both a presidential campaign and a presidency. Cody Keenan worked as a speechwriter during the Obama administration and Tad Devine has extensive experience advising on presidential campaigns and has written of his experience on Bernie Sanders’s unsuccessful 2016 campaign. These accounts articulate a unique perspective on individuals who often operated on the periphery but nevertheless played important roles in the running of a campaign and a presidency.

Overall, Murphy and Ó Beacháin have put together a collection of essays that despite Kennedy’s worldwide notoriety still provide a valuable contribution on the cult of personality that can be created around a historical figure. By challenging some presumed narratives that have long circulated about the Kennedy family and legacy, this collection is invaluable to any scholar interested in American politics, as well as the relationship between Ireland and America throughout the twentieth century. Furthermore, the accessibility of the work should also appeal to a wider readership, and anyone interested in the Kennedys, including the legacy of his Irish visit, one that still resonates on this island nearly sixty years later.