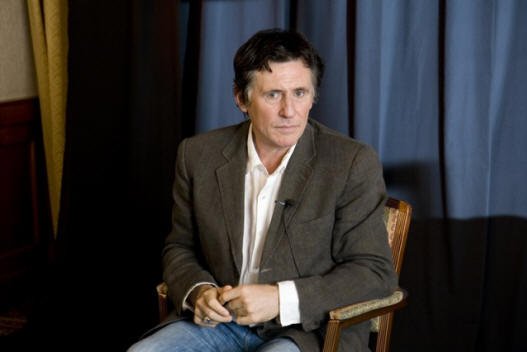 Being an immigrant here from Ireland I’ve always felt a disconnect between the country that I left and the country that I’ve come to. I’m very much aware that I’m an Irishman living in New York but I’m also aware that I’m an Irishman who belongs to the island of Ireland. I remember my daughter when she was about four, I was sitting by the bed doing the customary bedtime scéal and my daughter said “Dad, not another Irish myth, please.”1


2011 saw Gabriel Byrne leave one career defining role to embrace another, both of which circulated around his particular brand of Irish male stardom in an American context. The role he left was that of psychotherapist Paul Weston, the lynchpin of the HBO drama seriesIn Treatment. The role he stepped into was that of Irish Cultural Ambassador to America, a position created in the wake of the Irish Global Economic Forum at Farmleigh in 2009. Despite describing the job as lacking a remit, Byrne’s words at the launch of the programme in the Lincoln Centre NYC nevertheless suggested a clear vision of the role of the artist in the creation rather than imitation of reality:

Every artist has the power to transform reality. That is the reality of politics, the reality of religion, the social reality. In fact, that’s the job of the artist – is to be anarchic, is to question everything and out of that questioning to redefine a new reality and to a great extent the traditional modes of expression.2

This was very much in keeping with Culture Ireland’s (the body which oversaw the Imagine Ireland programme) vision of the project as being to “reshape and reinvigorate notions of Ireland, what it means to be Irish and the potential for Ireland into the future.”

In this regard, Byrne’s appointment acknowledged his work over several decades in questioning popular representations of the Irish, especially within the United States. Eugene Downes, Chief Executive of Culture Ireland remarked that when he first met Byrne:

The range and depth of his vision for Irish culture in America threw down a gauntlet to everyone in the room. His thinking challenged us to develop a more ambitious strategy for cultural engagement that reflected the changing dynamics of Ireland’s presence in the United States.3

Byrne’s work as a Cultural Ambassador in the United States can therefore be extended beyond speeches at various cultural events or curating a MoMA programme of Irish cinema during 2011, and traced back to his breakthrough film role as Tom Regan in the 1990 gangster homage Miller’s Crossing, through his pivotal role as Dean Keaton in The Usual Suspects and up to his more recent extended portrayal of Paul Weston.

Before considering these roles, it’s worth rehearsing the basic facts of Byrne’s background. Born in 1950 into what he identifies as a “solid working class family,” he trained to become a priest at a seminary in England from age 12 to 17, before abandoning the Church and training as a teacher. He turned to amateur-drama in 1975 and from there came to work at the Project Theatre (where he encountered Jim Sheridan, Liam Neeson, Neil Jordan, Ciaran Hinds, and Stephen Rea). Talent-spotted by John Boorman, he was cast as Uther Pendragon in Excalibur in 1980. A winning turn in RTE Television drama Bracken as a dark, brooding dairy farmer lead to a career-making role as a journalist who knows too much in the 1985 thriller Defence of the Realm. Hollywood soon beckoned (plus marriage and children with Ellen Barkin) and in the two decades following Miller’s Crossing he’s appeared in over thirty feature films. While these have included a number of Irish titles (The Courier, Frankie Starlight and Last of the High Kings) it is nonetheless surprising, particularly given the level of indigenous production activity in the past fifteen years, that he hasn’t appeared in an Irish film since 1998.

Nevertheless, Byrne has consistently played Irish inflected characters: Tom Regan in Miller’s Crossing, Dean Keaton in The Usual Suspects, Benjamin Madigan in the short-lived sitcomMadigan Men, Stewart Kane in Jindabyne the Australia-set adaptation of Raymond Carver’s short story “So Much Water So Close to Home” and most recently, Paul Weston. All of these roles are played as Irish, or at least Irish American, despite the fact that with the exception of Madigan Men, the roles are not obviously written as such. Indeed in the case of Miller’s Crossing, the character that became Tom Regan was originally Jewish whilst the role of Paul Weston is based on a character created by Israeli actor Assi Dayan.

That these characters “became” Irish was explicitly due to Byrne’s intervention. And in at least some of these cases, Byrne argued for the foregrounding of this ethnicity. In a 1990 interview with US Premiere Magazine about Miller’s Crossing he explained:

When I read the script out loud to myself, I said, “My God, this could have been written by somebody from Dublin!” When Byrne met the Coen brothers, he proposed playing the character with his accent. “We were skeptical”, recalls Joel, “but we said, ‘Fine, go ahead, try it.’ He did it and we liked the way it sounded.

His most recent success, In Treatment was less adapted for American TV from its Israeli source material “Be’ Tipul” than it was “translated”: the characters are identical and they experience the same story arcs. Given this, making Paul Weston Irish was a conscious digression from the original, one which Byrne apparently insisted upon:

“[T]he back-story I wanted to give him was that he emigrated to the States in his early teens and that he went back to Ireland to study at university. I find it interesting that there’s no reference to the fact that he’s Irish at all…At one point, a person who worked on the show asked me “Do you want to play this with a different accent?” I said ‘Why would I do that?’ He replied “Well, you might not be understood.” I said ‘I don’t think so.

Perhaps it’s not surprising that an actor would seek to remain within his/her own ethnicity if the opportunity provides itself. However, Byrne’s decision to remain “visibly” Irish in the roles he has chosen stands in stark contrast to say Colin Farrell, Liam Neeson or Pierce Brosnan. This raises the question of whether there is some significance behind Byrne’s choices? Do they suggest an awareness of the currency of nationality (and in particular of Irish nationality)? That Byrne is conscious of the semiotics of Irishness is evident from his comments on the Revisiting The Quiet Man film series which he curated at MoMA in early summer 2011:

The aim is to raise – but not necessarily to answer – the questions ‘Who are we as a group? How are we portrayed? How are we perceived?’. . . In terms of film, our story has, up to a certain point, been told for us, not by us. . .a great deal of what we know about each other as people comes from our knowledge of film.

In this respect, it is striking that most of the roles Byrne has opted to play Irish share a performance of masculinity that firmly rejects the deeply ingrained stereotype of physical violence. To be sure, violence is very much a part of Miller’s Crossing, The Usual Suspectsand Jindabyne. There is violence too in In Treatment, albeit more psychic than physical in nature. However, Byrne’s characters are consistently reluctant to resort to violence themselves. This is reflected in Byrne’s public persona, with interviewers stressing the “thoughtfulness with which he approaches every question and topic” (Langan 2011) and describing him as “a true man of letters and great intellectual curiosity” (Simon 2011). His casting as Paul Weston reflected the need for a star whose persona fitted with a show which was “dialogue-driven, relentlessly wordy and mostly about listening: not the stuff of action heroes.”

Indeed Byrne is on the record as explicitly disavowing violence. Speaking from his experience with the Christian Brothers he notes that:

Violence is also repeatedly visited upon Byrne’s Irish characters. Virtually every character inMiller’s Crossing assaults Tom at some stage in the film. In The Usual Suspects, he is beaten up during police questioning while in Jindabyne his best friend breaks his nose. And in In Treatment Paul Weston must endure constant verbal assaults from patients unwilling to confront their own frailties. Crucially, however, these characters do not respond in kind.

How are we to understand such stoicism? In her discussion of masochism as a response to a postwar crisis of masculinity refracted through the films of Jimmy Stewart, Amy Lawrence refers to the Stewart’s alternation between “grotesquely distorted pain” and “a soft, almost erotic yielding” when his character is shot in The Man from Laramie. There is, however none of this in Byrne’s playing. When Tom Regan is beaten up by thugs hired by Lazar, a bookie to whom Regan owes money, there’s no sense of masochism at work. Rather Regan’s response suggests a character who understands their own reality as one in which violence is a quotidian by-product of existence. He accepts it not as a product of his ethnic heritage, but of how things are in the world. Crucially, in a reversal of stereotype, he calmly and deliberately refuses to be drawn into it.

From Miller’s Crossing onwards Byrne has, in the roles he has chosen and in the manner in which he has played them, repeatedly sought to play against the stereotypes of Irish screen masculinity. It might be further argued that he has sought to overtly construct Irishness as an identity upon which violence is visited, in a more politically balanced reflection of Irish history than has heretofore been made available in Anglo-American representations. In this regard it is worth considering how Byrne’s conception of his own identity puts him in a position to reflect upon such images. As the quote at the beginning of this essay suggests Byrne’s sense of identity is at least slightly fractured. In an interview with Irish America Magazine he insisted that he identified himself as Irish rather than Irish American but then entered the caveat that:

Home in the most profound spiritual sense is always Ireland. [But] your children determine where home is.

Byrne then occupies a uniquely liminal space, of Ireland but not in it and perhaps, then, perfectly positioned to reflect upon and contribute to how its people are represented. His public role as Cultural Ambassador can be seen as an extension of a clear-sighted artistic ambition to ‘transform reality.’

Lawrence, Amy. 1998. “Jimmy Stewart is Being Beaten: Rope and the Postwar crisis in American Masculinity” Quarterly Review of Film and Video Vol 16 (1), pp 41-58.