Gaelic Games on Film: From Silent Film to Hollywood Hurling, Horror and the Emergence of Irish Cinema

Gaelic Games on Film: From Silent Film to Hollywood Hurling, Horror and the Emergence of Irish Cinema 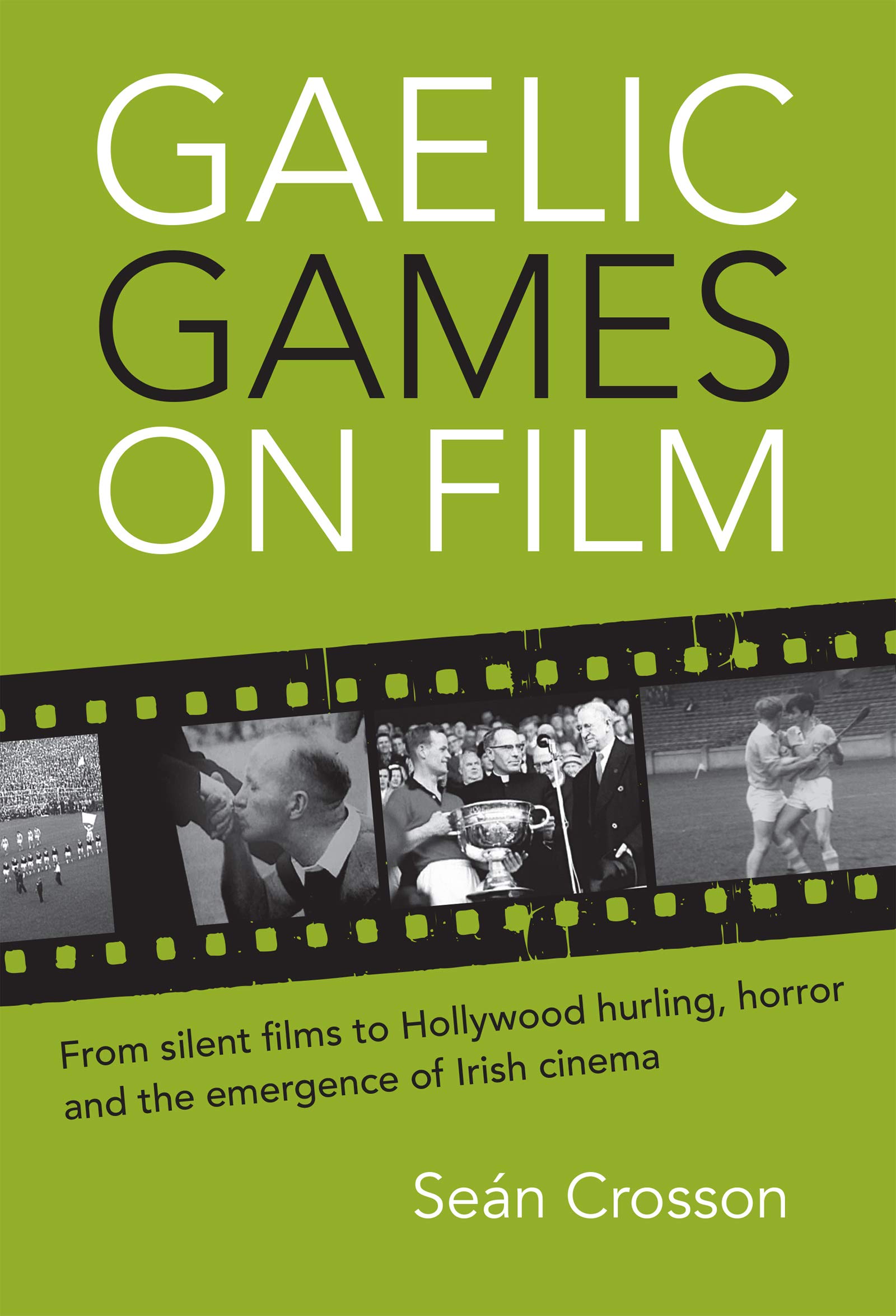 The appearance of Seán Crosson’s Gaelic Games on Film prompts the contradictory reactions that it seems like an event both long overdue and improbable. On the one hand, it seems incredible that it has taken until cinema’s 125th year for a book to appear devoted to the relationship of the twentieth century’s dominant medium to the sports promoted by Ireland’s key indigenous sporting organization, the Gaelic Athletic Association (GAA). On the other hand, one might wonder if enough material exists for such a book, given the dearth of indigenous film production for much of the twentieth century and the GAA centrality to a cultural nationalist project that was very often isolationist and hostile to imported popular culture that the cinema frequently epitomized. Crosson’s meticulous and carefully argued book convincingly addresses that second reaction by demonstrating that Gaelic games and cinema crossed paths in several different ways in the course of the century and more that the book covers. The fact that those encounters were only rarely in fictional features films requires Crosson to employ a mobile form of analysis that is attentive to quite different encounters between cinema and Gaelic games at different times.

In part a book on the topic has awaited a scholar with Crosson’s particular skills in film studies and sports studies. Over the past decade, he has written not only several directly relevant scholarly articles on Irish sports films and screening notes for the Irish Film Institute’s GAA Gold DVD series but also a monograph on sport and film internationally. That previous work is brought to bear coherently and effectively here in what is essentially an alternative history of Irish cinema seen from the perspective of its encounter with native sports. But it is also something more than this. Alongside the forms of analysis with which film studies scholars will be familiar are sports studies modes of inquiry that may be less familiar and that are here evident in discussions of the success of filming techniques in capturing styles of play, famous games and the technique of well-known players.

The book’s eight substantive chapters analyze the filmic representation of Gaelic games – Gaelic football, hurling and camogie – from the 1900s to the early twenty-first century. There are, it seems, no substantial representations on film of Gaelic handball or rounders, two of the less frequently played games falling under the GAA’s remit. Although the book’s subtitle is lengthy, even quite comprehensive, a clarification of what is meant by “film” here may be useful, given the virtual disappearance of film stock as a medium on which moving images are captured. Of course, historically this was not the case, and the book pursues its subject from the earliest known representations of Gaelic games in moving images on film to such recent, digitally shot features as Dead Meat (2004). So, although the book encompasses image formats beyond film stock, the word film is important to the book’s perspective both because it locates itself firmly as a work of film studies by referencing so much work in the area and because Crosson is careful to point out that the book does not deal with televised coverage of Gaelic games, a subject that he indicates still needs to be fully explored. Indeed, television is mentioned mostly in passing, and is only addressed in any detail in the conclusion’s analysis of the broadcasting of Laochra, the GAA’s spectacular event at Croke Park to commemorate the centenary of the 1916 Rising. While acknowledging that television and online platforms provide the main ways that people now see Gaelic games, Crosson nonetheless argues that television coverage has adopted cinematic modes of representation that can be seen in the newsreels, documentaries and feature films that the book analyzes.

Initially and until television took over the role in the 1960s, the cinema was the place to which spectators went to see highlights from matches presented on screen. Even before the marshalling of Catholic nationalist ideological opposition to cinema generally in the late 1910s, local cinema owners and filmmakers quickly identified the advantages of filming such popular sports meetings. Important matches, particularly the football and hurling finals, became a staple of both indigenous and foreign newsreel companies operating in Ireland, and although the representation by British companies could be problematic, newsreel coverage of Gaelic games was largely positive. And Crosson observes that while the GAA was itself one of the most important cultural nationalist organizations, it facilitated the filming of its games because it recognized the value of cinema in promoting its activities.

The nuances of this somewhat symbiotic relationship are well illustrated in the book’s opening chapters “Gaelic Games in Early Cinema” and “Gaelic Games in the Newsreel Era”. The relationships become more fraught in the third and fourth chapters, where foreign-produced films of the 1930s-1960s are the focus, before the book returns in the latter four chapters to indigenously produced films made between the late 1940s and the 2000s. By the third chapter “Hollywood Hurling: Representing Gaelic Games in American Cinema, 1930-60”, hurling, far more so than Gaelic football, comes to be the quintessential filmic Gaelic game. This was the case for Irish fiction filmmakers too. The opening early cinema chapter shows that hurling features prominently in the Film Company of Ireland’s Knocknagow (Fred O’Donovan, 1918), where it was the favourite pastime of the film’s hero, Matt the Thrasher. Because so few other fiction films were made by indigenous filmmakers for much of the rest of the twentieth century, representations of hurling in mid-century were by Hollywood filmmakers, including John Ford in The Rising of the Moon (1958) and Young Cassidy (1965). In an argument that will be familiar from Irish film studies work on Ford, Crosson argues that Ford’s representation of hurling as violent is a self-conscious unmasking of Irish stereotypes that are seen in an unself-conscious form in earlier Hollywood films, perhaps most explicitly in the non-fiction short Hurling (1936), whose ironic commentary on a hurling match exaggerates the likelihood that players will experience serious injury. Chapter 4 is devoted to 1958 British film Rooney (George Pollock), “one of the few films that features a hurling-playing lead protagonist”, albeit that he is played by Liverpool-born John Gregson (90).

While chapters 2-4 treat the variety of representation of Gaelic games offered by foreign filmmakers from the 1920s to the 1960s, the book’s final four chapters deal with indigenous representations from the 1940s to the 2000s. Chapters 5 and 6 examine newsreels and other non-fiction films made by the National Film Institute of Ireland (later the Irish Film Institute) and the Irish-language cultural organization Gael Linn. While these chapters show how depictions of Gaelic games were “an important cultural resource in affirming Irish identity and established conceptions of the Irish nation” (139), Chapter 7, “The Critical Turn: Gaelic Games in Film between the 1960s and 1980s”, turns to films that scrutinize constructions of Irish identity favoured by the state and other parts of the establishment. In common with much of the work produced by filmmakers involved in the critically engaged Irish cinema that emerged from the 1970s, Crosson shows that Peter Lennon’s 1968 documentary Rocky Road to Dublin and Fergus Tighe’s 50-minute drama Clash of the Ash (1987) perform a postnationalist demythologizing of Gaelic games. Although Chapter 8 “‘The Hurley Is the New Chainsaw’: Gaelic Games in Contemporary Cinema” also considers Pat Comer’s documentary A Year ‘Til Sunday (1998) and makes brief mention of such well-known features as Michael Collins (Neil Jordan, 1996) and The Wind that Shakes the Barley (Ken Loach, 2006), it engages most substantially with the 2004 horror film Dead Meat (Conor McMahon). As such, it participates in Irish film studies remarkable reassessment of the horror genre, which many critics formerly dismissed as too trivial to deserve attention. In Dead Meat, Crosson convincingly argues, “hurling functions as a protective motif against the onslaught of voracious global capitalism” (172).

The text’s insightful reading of films and institutions is accompanied by 41 Illustrations, many of them screengrabs from the films being discussed but others are newspaper advertisements, photographs of figures featured in the text, film posters, reproductions of documents and memorably, a Fianna Fáil election campaign poster featuring Bertie Ahearne. The publisher is to be congratulated for agreeing to the inclusion of so many images in the book, albeit that one or two of them could be reproduced more clearly. Apart from that quibble, the book is handsomely produced in a reasonably priced hardback edition. It will hopefully also appear in a paperback edition soon because although it operates through academic modes of discourse, it is lucidly written and addresses a topic that makes it likely that it will be sought out by non-academic readers interested in sport in general and the GAA in particular.