by Christine Cusick. This text may be archived and redistributed both in electronic form and in hard copy, provided that the author and journal are properly cited and no fee is charged for access. 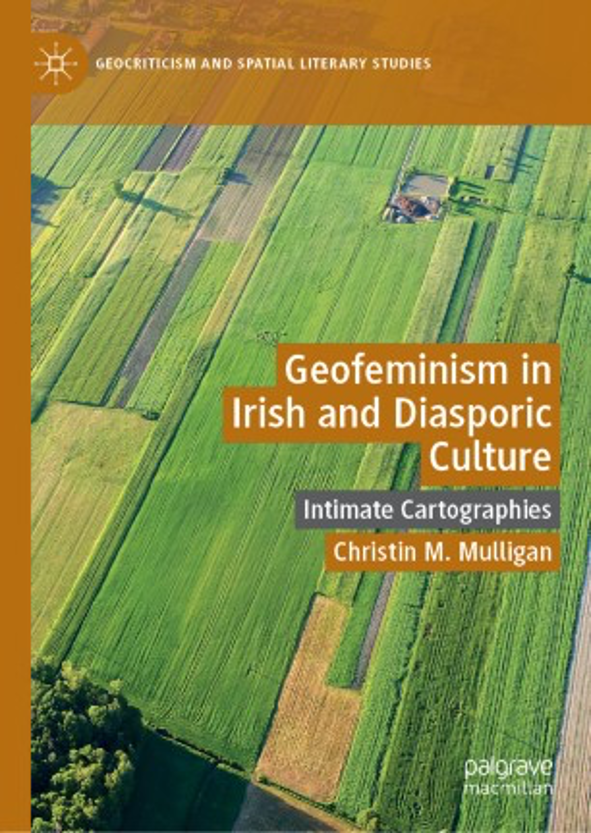 Geofeminism, as an interpretive lens, has the potential to expand the scope and impact of fields such as ecocriticism, feminist studies, and cultural geography. At its best, this inquiry invites readers to interrogate not only the ways human experience of nonhuman nature are wedded to gender identity, power, and constructs, but also the ways the human animal, in body, mind, and imagination, occupies space and time. As is the case with most specialised terminology in academic discourse, it has not evolved without critique, and this study is quite cognizant of this context while still working to “revive” its use. To successfully scaffold and synthesise these epistemological nuances is no easy task, and yet in Christin Mulligan’s study Geofeminism in Irish and Diasporic Culture: Intimate Cartographies she achieves just this.

In the book’s introduction, Mulligan asserts that through a juxtaposition of chronological periods and genres she aims to study “the ways in which their symbolic landscapes respond to centuries-old literary traditions and see to resituate ‘occupied territory’” (4). She prepares the reader that she will trace “the struggle for each of the authors and filmmakers to find their voices and tongues (Gaelic, Shakespearean, or otherwise) amidst [the] complex history filled with lacunae created by oppression from various authoritarian and misogynist institutions” (3). This ambitious pursuit is a necessary and often neglected one, and this study contributes to the conversation by tending to the gaps and silences created across time and space and by simultaneously holding these conditions of being in the world within the same critical breath. Mulligan achieves this through an expansive definition of geofeminism that includes “intersectional geofeminist theoretical paradigms and postcolonial geocriticism” (4) and an authentically robust, interdisciplinary methodology.

Border-crossing of time, genre, text, and place guides this study. “Saor an tSeanbhcan Bocht!’: Moving from Cailleach to Spéirbhean,” for example, begins with an examination of historical contexts for the archetypes of an tseanbhean bhoct, the poor old woman, or ancailleach, the hag, as well as an spéirbhean, the sky queen, with specific attention to the ways this feminisation of Ireland is connected to an analysis of the presence, and absence, of the Irish language in varying discourse. Beginning with a close study of “Róisín Dubh” in the Jacobite period, shifting to the lens of translation work of nineteenth and twentieth centuries, moving to the Joycean adaptation and then to the satirical turn in the work of late-twentieth-century poets, the chapter navigates the location of colonial resistance and transgression of hierarchical notions of time, history, and space. Throughout this genealogy, the conclusion insists that the nuanced cultural preoccupation with these icons indicates that psychological decolonisation is neither tidy nor complete.

Through a close study of Ní Dhomhnaill’s “Cailleach/Hag” and “Primavera” Mulligan examines a contemporary perspective on the sky-woman images and their relevance for Ní Dhomhnaill in light of the legacy of James Joyce, Seamus Heaney, and Paul Muldoon’s treatment of the aislingí in English as well as in Máirtín Ó Cadhain’s prose. Mulligan argues that it is the geographic specificity that distinguishes Ní Dhomhnaill’s point of mythical and personal location. Rather than a sweeping map that subsumes all of Ireland, it is the “intimate cartography” that is in fact subversive, that works from within the historic objectification of women, of the Cailleach/hag, to in fact upend it. Such reading of Ní Dhomhnaill’s disembodied “hag energy” is the sort of turn that characterises this study, a reminder that a diachronic interrogation of hierarchy, of archetype, of identity, is not a linear process and sometimes leads us into the underworld as much as the one that surrounds us.

In chapters such as “Nuala Ní Dhomhnaill’s Traumatic/Erotic Map: Transubstatiating the Body of Ireland” Mulligan deepens the analysis of Ní Dhomhnaill’s cartographic impulse, engaging the lens of cartographer and writer Tim Robinson’s conception of “dwelling” in compelling ways, positing the possibilities of mapping as a generative act that can in fact be a gesture of recuperation, of reclaiming both language and stories of human inhabitation. More specifically, Mulligan argues that Ní Dhomhnaill’s use of lyric address to confront trauma positions Irish-language female speakers as subversive agents within social, political, and religious contexts and that essential to this are the rhetorical forms and structures of the Irish writing.

In keeping with its spirit of transgression, the study unabashedly calls into question the potentially short-sighted disregard of artistic / religious traditions because of their complicity in oppressive power systems and suggests that in so doing we are losing sight of how poets such as Nuala Ní Dhomhnaill subvert and reconstitute this history and how in this transgressive spirit reveal the centrality of linguistic intervention.

Through close reading and diligent theoretical frameworks that draw heavily on feminist critics, including Luce Irigaray and Julia Kristeva, and postcolonial critics such as Homi Bhabha, this study gracefully traverses time and space. It invites us to consider how cultural texts bring “seemingly disparate” ideologies, such as traditional Irish Catholic perspectives on the body and spirit and feminist ideologies into dialogue. It engages meticulous readings of canonical figures from Yeats to Joyce to Heaney, always for the sake of illuminating the cartographies that script and are inscribed by the female voice. Moreover, the diligent narrative continuity across chapters allows the reader to experience the very embodiment of time and place that she invites us to interrogate.

This study calls us to consider marginalised contemporary voices not merely against figures of the Irish canon, but as necessarily entangled with them. And while the juxtaposition of Yeats against mystery thriller writer Tana French may not seem a likely move, this is perhaps the very point. Using French’s “revisionist mythology” as a lens to highlight Yeats’s economic, gender, and political privilege in relation to his contrived escapes into otherworld, Mulligan calls into question the assumption of its safety, offering as example French’s novels and the historical case of Bridget Cleary, a seamstress, who thought by her family to be a “changeling” was burned by her husband in 1895 during a home exorcism. The study thus uses a juxtaposition of Yeatsian quest and conceptions of the otherworld against the lived tragedy of female as “changeling” to craft a feminist critique of place and invocation of the changeling in French’s fiction with particular emphasis on The Likeness (2008), ultimately concluding that French uses Irish mythology to “reshape the legacy” of Yeats.

While this is not, and never purports to be, an ecofeminist study, the book’s final chapter “Coda: The Necessity of thinking Geologically and Globally on Irish Grounds” thoughtfully gestures toward the implications of such analysis for understandings of Ireland and the Anthropocene with particular emphasis on the necessity of translation studies and a transnational interpretive lens.

Mulligan is willing to embed her own intellectual curiosity within its time and place in this study, from recalling her first undergraduate encounter with Seamus Heaney’s “Postscript,” extending the experience into present classrooms, to offering a “coda” that marks how conference proceedings stirred her still-expanding ideas on the value of these conversations. In this way, she maps her own “intimacies” as a scholar and as a human. This is an admittedly ambitious study, traversing genres, languages, canons, genders, oceans, and centuries. At times it perhaps tries to encompass more than might be necessary, but given the design of its scope and purpose, it admirably achieves both breadth and depth.

Offering us a relatively new voice in Irish Studies, this monograph offers us a glimpse into the possibilities and energy of our field as one that will increasingly hold space for the female voices and experiences of the past and present. Mulligan not only invites us to reimagine the primary texts, but in several instances, she thoughtfully calls us to reflect on and re-imagine leading voices of our field, and as a result, on our own work as scholars. Her analysis is rigorous and her conclusions are unapologetically hopeful, arguing ultimately that language allows for healing and “redemptive maps,” even against centuries fraught with colonial and patriarchal oppression.

In his series editor’s preface, Robert T. Tally Jr. suggests that the aim of the Geocriticism and Spatial Literary Series is to “make possible different ways of seeing literary and cultural texts.” I would argue that in the series’ inclusion of Mulligan’s study, this goal is achieved.