by William A. Johnsen. This text may be archived and redistributed both in electronic form and in hard copy, provided that the author and journal are properly cited and no fee is charged for access. 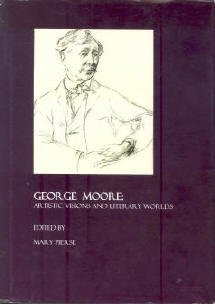 Fifteen of the eighteen chapters of this book are drawn from papers given at a conference on George Moore in March 2005 at Cork University, a very quick turnaround for revision, proofreading and book production.

Authors are both well-known and emergent Moore scholars. Adrian Frazier, author of the remarkable George Moore 1852-1933, begins the series by addressing the problems in the status of George Moore’s work [which inevitably affects the status of those who write about him and where their work appears]. Frazier tracks the reviews of his biography, beginning with Donald Davie, which repeatedly take sides, Yeats’s side of Moore, by quoting Yeats against Moore. Frazier’s biography is monumental in its scholarship; he is justified in asking why it is so easy for reviewers to ignore the Moore he painstakingly recovered, for the Moore they have in their pockets.

Subsequent essays attempt to gain a proper place for Moore in the genres of fiction he practiced, the national and local cultures he fictionalized, the social issues dominant in his time, especially gender, often presenting close textual, genetic readings to trace his movements into and out of these fields.

Pierse introduces the group as beneficially international, and Munira Mutran’s essay nicely marks the way Moore acts out a new world fantasy of living in London and Paris, making Confessions of a Young Man «a valuable document of a cultural moment,» an effective basis for comparative analysis of world writers drawn to the European capitals of modernism, whether or not they knew Moore. Alberto Lázaro reviews the history of Moore’s reception in Spain during censorship, a welcome partner to customary reflections on Irish censorship of Irish writers of the same period.

Peter Christensen’s «The Brook Kerith and the Search for the Historical Jesus» is well-researched and -documented. Lucy McDiarmid amalgamates Erving Goffman, Emmanuel Levinas, and Mary Louise Pratt’s ‘contact zones’ to set up study of face-to-face, ‘small behaviors’ studied in Moore’s fiction, an issue which touches on Moore’s own character-relations with other writers as well as his fine lifelong reflection on his fictional characters. It is here perhaps that one would think back to the origin of Moore’s embattled status but also the surprising affection and respect extended to him by Manet and Zola in Paris, and Woolf in London, artists notoriously difficult to please in their companionships.

Mª Elena Jaime de Pablos and Catherine Smith focus on gender, Michael O’Sullivan and Mark Llewellyn on celibacy. Ann Heilmann shows Moore‘s ‘conceptual alignment’ of the artist manqué and the female hysteric, a connection which encourages us to place Moore next to other European writers on hysteria not usually seen as kindred spirits (Strindberg’s Fadren was completed in 1887).

There are fine genetic studies by Brendan Fleming on «Mildred Lawson» and Christine Huguet onEsther Waters. Fabienne Garcier and Pádraigín Riggs write on the short story. One could hope that Toíbín’s recent Mothers and Sons will inaugurate a return to the short story and allow us to return to Moore’s role in its development. In her introduction Mary Pierse repeats Fabienne Garcier’s claim that Moore was «the first Irish writer to use the signifier short story in his correspondence.» (41) Neither Pierse nor Garcier date this event, contextualize it or suggest its significance. In the biographical entry at the end of the volume, we learn that Garcier’s doctoral thesis was on the history of the Irish short story 1880-1960 – perhaps we will hear more from her.

Mary Pierse pulls double duty as editor and author, arguing for the political Moore on the strength of his immersion in social reality and the strength of the Deleuze/Guattari elaboration of a littérature mineure. Her first endnote promising to reference D/G is misplaced to the last endnote, showing the editor is also victimized by the weak copyediting found throughout the volume: typos, dropped prepositions, and missing information.

Did no one at the conference or in reading Sullivan’s ‘Singular Celibates: Narrative Seduction in Moore and Joyce’ insist that he discuss Dubliners, where Joyce recognizes in Bob Doran of ‘The Boarding House’ ‘the curious patient memory of the celibate’? Couldn’t anyone along the way, beginning with the author, have edited out such sentences as «It is often said that, no matter how competent and knowledgeable the translator might be, something is always lost in translation»? Could no one find a page number in Woolf’s published diaries for her persuasive and sympathetic characterization of Moore to replace ‘n.p.’?

In George Moore 1852-1933 Frazier says that R.F. Foster encouraged him to write it, but to cut no corners, leave no stone unturned. Amen. This is especially true if we need to win back attention to Moore and his work.  Get your library to buy this book; if it is not beautiful, it is sturdy, and will survive much handling. Read it. Go to the conferences. Ask strong questions. Work on Moore. Write as if you will be read minutely. Never pass copy on with mistakes or omissions in it; don’t leave it up to the editor or the press. If the deadline is tomorrow, get it done.