by Harvey O'Brien. This text may be archived and redistributed both in electronic form and in hard copy, provided that the author and journal are properly cited and no fee is charged for access. 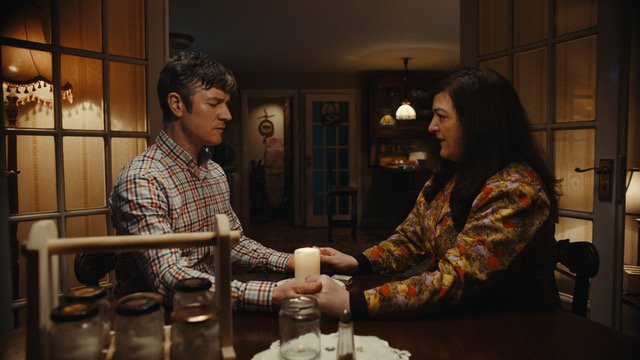 As Ireland becomes more comfortable with its place in a transnational cinematic landscape, Irish horror cinema has been determinedly staying on trend. Recent films like The Devil’s Doorway (Aislinn Clarke, 2019) and The Hole in the Ground (Lee Cronin, 2019) have learned the lessons of the East Asian slow creep, the indie indignation of Jordan Peele and Jennifer Kent, and how to use the Irish environment to exploit the natural affinity with post apocalypticism and folk horror. Not that a global outlook is a bad thing, but Extra Ordinary (Mike Ahern and Enda Loughman, 2019) is a determinedly parochial film that wears its localism not so much proudly on its sleeve, because that would be having notions, but casually like an old jumper.

The film is a horror comedy, blending gore and parody with something altogether more distinctly and identifiably provincial, because even parody is a bit hifalutin, like. It stars a reassuringly rural-accented Maeve Higgins as Rose, a small town driving instructor with a dark past… or, well, listen, not so much dark as, sure, not worth talking about really. No, yeah, she’s a psychic medium, see, and her father was a very famous paranormal researcher who vanished in mysterious and unearthly circumstances years ago, only she’d really prefer not to talk about it. In fact her voice mail message makes it clear that if you’re calling about “the other thing”, she doesn’t do that anymore, but she’s very happy to give you driving lessons and she’ll even bring a snack if you want one. Thing is, she does see dead people, and haunted toasters, green bins, and other fairly unglamorous manifestations of otherworldliness, even though she’d much rather not because, you know, she really can’t be dealing with that sort of thing.

Higgins is so perfect at the heart of the film that it would be easy to assume it was entirely conceived around her particular style, an extension of her stand up or and sketch comedy. She has even played the psychic role before as a character on Naked Camera (2005-07) where she masqueraded as a spirit medium looking to get insurance cover for her spectral visitors from unsuspecting brokerage firms. A faux American accent added a ring of absurd credibility to that persona for sketch purposes and likely threw off her victims, but Higgins has demonstrably always been able to play straight in the midst of the preposterous. She also seems able to present satire without humiliation and self-deprecation without self-congratulation (the “nudge-nudge” curse of the prankster). It is that essential quality of gentleness that lightens the heart of Extra Ordinary, which has some stuff in it that might not otherwise be to all tastes. Higgins and Damien Fox did assist in the writing of the film, but Ahern and Loughman conceived of Extra Ordinary as a consciously unique and particularly Irish film “the opposite of Ghostbusters” in which the banal and the wondrous rub elbows and never bat an eyelid, as when an Irish person sees a celebrity in the street and merely nods. Their hope was for “a film only we could make” but with a “heart that hopefully becomes universal when other people watch it.”

The antagonist of the piece is the amusingly-named Christian Winter (Will Forte) a washed-up singer whose one-hit-wonder “Cosmic Woman” riffs on motifs from Chris De Burgh, including a la-la-la chorus and sci-fi synths. He now lives in the local big house (of course) and has made a pact with a demon with a taste for virgins (not goats – some demons are into that, but not all of them, you see). Meanwhile his bored wife Claudia (Claudia O’Doherty) is having an awful time ordering a good Chinese while waiting for riches to ensue from all this Diabolism. An added gag is the very blandness of Winter’s star persona. Supporting a bad wig and lush moustache, Forte is playing Seventies smooth as incongruously as is entirely appropriate, a caricature in stark contrast to the usual countercultural heavy metal diabolist seen tongue-in-cheek as recently as in Jason Lei Howden’s Deathgasm (2015, NZ).

The central dynamic of the film between the extraordinary and the extra ordinary is encapsulated in the difficulties faced by widower Martin Martin (Barry Ward), which triggers the plot. He is trying to get on with his life while still under the thumb of his dead wife, Bonnie, who is still watching over him and their daughter Sarah (Emma Coleman) not from a respectful distance in a celestial sanctuary, but right in the house with them. She makes her presence known by throwing things at Martin’s head when household details don’t match her standards. Considerably more malevolent than Blithe Spirit’s Elvira, Bonnie eventually makes a cameo appearance of sorts when she possesses Martin, giving Ward a chance to do a series of comic personality shifts complete with distinctive facial expressions, a border countys accent, and an omnipresent fag-end that simply appears whenever Bonnie manifests. Martin deals with the ongoing post-mortem domestic disturbance as any typical Irish person would, with a shrug and “sure, what can I do?” attitude. The more assertive Sarah has other ideas and urges her Dad to contact Rose before, in the way of these things, becoming Christian Winter’s next target.

Extra Ordinary is humorous but not apologetic about having thematic preoccupations. The film is about lives lived in denial, about obsessions with the past and the importance not so much of forgetting what has gone before as dealing with it and moving on. Rose can’t let go of her father, Martin can’t let go of Bonnie, Christian can’t let go of his ego. All of them must ultimately do so, a realisation triggered by their encounters with one another. Even Bonnie has to learn to release her grip on her erstwhile family and recognise her time has passed. This is an apt enough metaphor for the path of Irish genre cinema, so often secretly shame-faced under the stern ideological gaze of First Wave film and academic approbation.

The film is set in a vaguely defined early 2000s Ireland, which allows a lo-fi aesthetic (clam phones and answering machines) to add to the sense of pleasing parochialism and to paper over the cracks in what might be otherwise expected to be a bit more woke. It is reminiscent of Moone Boy (2012-15) or even Derry Girls (2018 – ) in this feeling, and in its deployment of the comparatively recent past as a space for comedic retrospection, though its representation of small town Ireland is considerably more regressive and less pointedly satirical. It has a henpecked husband, a shrewish Aussie wife, pinafore-clad housewives (Derry Girls’ Siobhan McSweeney has a small role as “Boring Noreen”) and other assorted rural types: all the trappings of an era in humour probably entirely alien to the average millennial. Being set just after the turn of the century might, in that sense, be part of its armour. It is, after all, a world that is consciously and specifically trapped by (damaging) legacies of the past. It also has a go at representational forms of a bygone era, such as Rose’s father’s ultra-cheesy VHS lecture series on the paranormal that she uses for reference and the ongoing twee Irish television broadcasts seen in the background (hmm… is that bit really so retro?).

Rose is essentially the post-teenage sad single girl, unglamorous and unloved, bouncing on her yoga ball in her tights while eating yoghurt, and on a trajectory to inevitable romantic rescue. Given such a familiar trope from the romantic comedy (a genre itself on a post-millennial downswing), it shouldn’t surprise us to find it running through what is at least partly a parody of one genre allied with some of the tics of another. However, unflappable (mainly) and nonplussed in her physicality and temperament, Higgins makes Rose both dimensional and anchoring. As Rose uses her gifts to help Martin and Sarah, she is also true to that part of herself she has attempted to close off. In so being she becomes less moribund and more fully alive. Rose’s quest to shed her past and the legacy of her father comes with an inherent sense of loss, but there remains that sense that her essential nature makes it less about rescue (not least because she is the actual agent of rescue in the narrative – saving Martin and Sarah) and more about self-realisation and the discovery of a path from (figurative and literal) death to (hopeful and renewed) life. Higgins imbues Rose with a strength grounded not in sensational revelation, excessive vulnerability, or outward sexual availability, but rather in that core ethos of the quotidian that is funny precisely because it is so, well, “ordinary”.

It’s not that comedy hasn’t been tried before, or been used as an ironic mask in Irish film. In fact, the first Irish horror to attract any kind of international notice – the Derek Landy-penned Boy Eats Girl (Stephen Bradley, 2005) – was ahead of the global curve as a rom-zom-com with Samantha Mumba front and centre of a new Irish ethnicity. Paddy Breathnach’s Shrooms (2007) went for a kind of shaggy-dog resolution that either played as cynical or subversive depending on how you rolled with it. Grabbers (John Wright, 2012) put the piss-up in piss-take in a canny nod to the ongoing global categorisation of Irish parochialism as centring on alcohol, here weaponised against alcohol-allergic sea monsters. Neil Jordan, of course, jumped the gun entirely way back with High Spirits (1988) though the lyrical whimsy he was hoping for in trafficking between the worlds of the living and the dead was lost somewhere between the star powers Steve Guttenberg and Peter O’Toole and the accents of Daryl Hannah and Liam Neeson.

In Extra Ordinary, the parodic elements don’t undermine the film’s generic base. It’s something in the tone, where that gentle parochialism seems to reassure us that statements of the obvious are assumed to be obvious, but that that’s okay. There are jokes about The Exorcist (William Friedkin, 1973) and of course heavy nods in the direction of The Sixth Sense (M. Night Shyalaman, 1999), but the film also mercilessly skewers a particular strand of 1970s diabolist tales that fuelled the culture of the Satanic Panic. The nature of evil as wilful cruelty grounded in selfishness and self-absorption is firmly spelled out, and the villain’s self-delusion is shown to be more complete and intractable than those exhibited by Rose and Martin. We’re invited to laugh at things that don’t change. There’s also a lot of bad taste sexual humour (including bestiality gags) and lashings of comical gore right from the get-go, as well as repeated regurgitation scenes (gathering ectoplasm, you see) which eventually drive Martin to cry out “does it have to be so unnecessarily gross?” mid-vomit, and the climax of the film turns on a gag about virginity that you either take as you find it or which will finally push you over the edge into joyless disapproval.

There was a time not that long ago where the appropriateness and applicability of this film as an exhibition of the ethos of an Irish cinema would have been sombrely debated. But by 2020 Irish genre films have begun to display edges and contours and even a saggy midsection that they might just be comfortable enough with to not be quite so uptight about it. Extra Ordinary premiered at SXSW in 2019 and after an Autumn release in Europe hit general distribution in the US in March 2020. Judging by the reactions recorded online by Wildcard Distribution following its screenings at SXSW in 2019, the blogosphere seems to have got the joke, and, unsurprisingly, hailed Maeve Higgins at the heart of it, just being like herself, like.