by Tony Murray. This text may be archived and redistributed both in electronic form and in hard copy, provided that the author and journal are properly cited and no fee is charged for access. 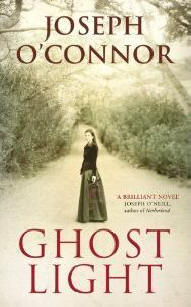 In recent years, we have witnessed something of a collective “backward glance” in Irish literature. A glut of novels, set in the early to mid-twentieth century, has been published by established Irish writers, only to provoke the ire of their younger peers. Julian Gough recently commented, with some justification, that “reading award-winning Irish literary fiction, you wouldn’t know television had been invented” (Flood 2010).

There has certainly been a gradual turn by some authors towards historical fiction. Playing a prominent part in this have been novels about Irish migration. Last year, there was Colm Tóibin’s Brooklyn, set in the early 1950s; three years earlier Edna O’Brien partly set In the Light of Evening in the same location in the 1920s. But, perhaps responsible for starting the whole thing off, there was Roddy Doyle’s Oh, Play that Thing (2003), again set in the 1920s, this time in Chicago. Joseph O’Connor’s most recent novel, Ghost Light, ploughs a similar furrow. But, importantly, it focuses as much on the journey eastwards to Britain as westwards to America, with post-war London providing the key backdrop to the action.

The novel is essentially a love story exploring the unlikely yet intense relationship between the playwright J.M. Synge and the actress Molly Allgood. It is a part-biographical, part-imaginative excursion into a slice of Irish theatrical history, but also an intriguing and absorbing study of the experience of exile. This is most obviously the case with regard to Molly who ended up living in destitution in a Paddington lodging house. But, it is also true, in another sense, of Synge himself who (quite apart from his sojourns in Paris and Coblenz) saw himself as “a kind of outsider” (51) or as O’Connor pointed out in a recent interview, “as a migrant among the natives” (O’Connor 2010).  Like The Light of Evening, O’Connor’s novel moves back and forth across time and space, between Ireland, England, Europe and America, between those who left and those who stayed and those who returned only to leave again. In this regard, Ghost Light explores themes of diaspora and displacement in Irish life in a more nuanced way than, for instance,Brooklyn, which is a more traditional novel of migration told in a rather linear and flat manner. O’Connor, of course, is well-qualified to take on this subject. His early work was informed by his own experiences in London in the late 1980s (O’Connor 1991) and his two outings previous to this one explored similar territory on both sides of the Atlantic (O’Connor Star of the Sea, 2002; Redemption Falls, 2007).

Ghost Light, however, is possibly O’Connor’s most technically accomplished novel to date. There are moments of striking lyrical intensity which contribute to a moving meditation on love and loss and the role of memory in our lives. His use of simile is particularly inventive and effective. Take, for instance, the way he describes Synge’s censorious habit of using the word “disappointed”, “like a tartish cologne” (89). Perhaps, O’Connor’s most ambitious decision was to write large parts of the novel in the second person, a notoriously difficult register for writers to pull off, but one which seems to work quite well. Initially, one finds oneself asking who exactly the narrator is. Is it a friend of Molly’s, is it Molly’s more famous sister Sarah, or is it, indeed, Synge? Eventually, one can only conclude that it is Molly herself, in the form of her alter ego, reflecting on episodes from her rather erratic life and career. Such memories flood her thoughts as, like a latter-day Mrs Dalloway, she ambles through the streets of post-war London to participate in a radio broadcast of Sean O’Casey’s The Silver Tassie. Indeed, the foundation of the novel is a “day in the life” of Molly (27 October 1952 to be precise) and a very portentous day it proves to be, as we later discover. From here, Molly’s thoughts diverge in extended Bloom-like detours to scenes from her life with Synge: a rehearsal of The Playboy at the Abbey; a walk in the Wicklow mountains; a performance in San Francisco. The ghost of Joyce is evident also in Molly’s namesake from Ulysses who haunts the shape and accent of her thoughts and most markedly in her frank and, at times, bawdy ruminations on her sexual relationship with her “Tramp”. Synge, on the other hand, comes across as very much a product of his times and background. Like Yeats, he was essentially a middle-class Victorian gentleman with a reserve bordering on the chilly. But he was also clearly devoted to Molly and, when free from the disapproving gaze of his family and professional associates (including a rather severely drawn Lady Gregory), Synge is portrayed as a man prepared to reveal a modern and liberated self.

If a rather sombre read, the novel is nevertheless very funny in places. This is particularly true in those passages of dialogue where O’Connor gives free rein to the working-class Dublin vernacular. It is apparent in the character of Molly herself but also in the many finely-sketched auxiliary characters who pop up to provide light relief from time to time. O’Connor has a stab at some minor Cockney characters too, although the deft touch he displays when giving voice to the inhabitants of his home town is not quite so persuasive here. At moments, it verges on “Mockney” and the rather quaint off-kilter tones one might expect of a character actor fresh out of Ealing Studios. The real success of the novel is its structure which is a complex mosaic of set pieces that, if chronologically somewhat confusing, is nevertheless entirely justified. We learn about Molly, Synge, their families and acquaintances in a fragmented way, rather as we might in real life. Episodes from their lives come together in jigsaw fashion providing fresh perspectives on their personalities until, by the close, an almost complete picture of their relationship has emerged. Almost complete, because we are still left wondering at the end about precisely what drew these two people together. But, perhaps, this is not necessarily a bad thing. It invites us to complete the story ourselves and, by doing so, play our part in an imaginative journey as important as Molly and Synge’s, namely that between the writer and his readers.

Flood, Alison. 2010. ‘Julian Gough slams fellow Irish novelists as ‘priestly caste’ cut off from the culture’ in The Guardian, 11 February.