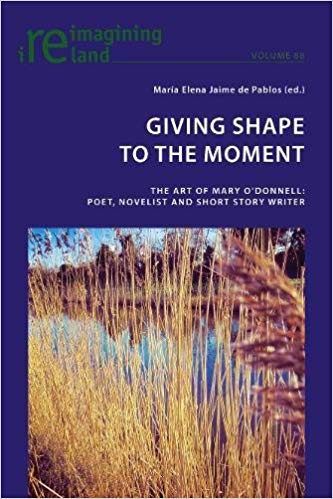 María Elena Jaime de Pablos’s edited collection Giving Shape to the Moment: The Art of Mary O’Donnell, Poet, Novelist and Short-Story Writer constitutes the first book-length critical volume on this important Irish figure. It represents a much needed, illuminating and insightful critical approach to Mary O’Donnell, who since the beginning of 1990 has published widely in the three genres referred to by the title of this critical volume. This splendid academic study presents an adequate rationale as it comprises 6 essays dealing with O’Donnell’s fiction, poetry, short fiction and cultural output. These are followed by a recent interview with the Irish author, a new short story by O’Donnell and a comprehensive bibliography of primary and secondary sources. The latter will meet the needs of any reader, critic and scholar on Mary O’Donnell. A critical approach to Mary O’Donnell was much needed and this volume will make an important contribution to scholarship in Irish Studies. The publication of the volume as part of Peter Lang’s Reimagining Ireland series confirms this fact. There have been some critical articles in journals and chapters in other volumes on this Irish author, but no comprehensive volume on this author has appeared yet. Therefore, this volume will find an important space within the critical studies on today’s Irish authors. As this volume shows, Mary O’Donnell’s literary and critical production has always engaged with themes, tropes and topics that delve into literary experimentation, preoccupation with human issues, gender and a pluralist Ireland. Her literary innovation has always been met with an appreciation of that which is deeply human. Accordingly, the volume has the ultimate objective to produce a comprehensive academic approach to O’Donnell’s work that was pending. This is difficult to understand as she has been considered an important Irish author with a body of work that features seven collections of poetry, four novels, two collections of short stories and many radio contributions, reviews and academic essays. This book constitutes, thus, a salient achievement. The volume is well written and its structure follows not only a chronological stance but is clearly divided into the main genres used by Mary O’Donnell. The international scholars who participate in this volume are known for their expertise on Irish women’s writing and have important impact contributions on the field. The six chapters in the present volume could be read separately as the intention behind reveals a clear interest in offering a succinct analysis of Mary O’Donnell’s writings. This important academic work pays homage to a writer who has always proved to blend artistic and literary mastery with ideas of humanism, social justice, feminism and truth.

As stated above, this volume contains a number of critical essays of academic excellence that are followed by an interview and a new short story by Mary O’Donnell. The final chapter includes a complete bibliography on a myriad of primary and secondary sources that deal with O’Donnell’s production. The volume begins with a wonderful preface by Éilís Ní Dhuibhne, who claims that Mary O’Donnell is more than what the word “writer” designates and believes O’Donnell is a “poet”, and not a writer of poetry. The word “poet” captures the real essence of Mary O’Donnell. Ní Dhuibhne traces the beginnings of O’Donnell’s production and sets it against that backdrop of Dublin’s literary and publishing world. For Ní Dhuibhne, O’Donnell excels in artistic and human frankness, engagement and honesty. O’Donnell engages with life, society and Ireland from different but related perspectives. Ní Dhuibhne praises this critical and academic collection and thanks the editor, contributors and all those “Irish friends in Spain” for honouring Mary O’Donnell with the volume. The editor to the volume, María Elena Jaime de Pablos introduces the whole collection and reminds the reader of the original idea for the volume, one of the annual international AEDEI Conferences, this time held at the University of Alcalá, Spain in May 2006. Since its creation The Spanish Association for Irish Studies (AEDEI) has catered for academic excellence on Irish Studies and its members have always shown a passion for Ireland and her artists. Mary O’Donnell was one of the writers invited to this conference and after her enticing reading the editor to this volume came with idea to produce a critical study on O’Donnell’s works and achievements. Jaime de Pablos introduces the contributors and explains what the contents of their illuminating chapters are. That only one male critic appears in the collection should raise, according to Jaime de Pablos, a concern for how responses to female writers appear on publications. This concern to place critical approaches to female Irish writers is also extended by the editor of this volume to Mary O’Donnell’s place within the Irish literary canon. For many, she has been described as a feminist writer, a liminal writer, a complex writer that has not accommodated within a clear place in her own culture. But, as the editor claims, O’Donnell’s range of themes, topics and literary experimentation cover many of today’s issues worldwide and, especially, in Ireland.

The first academic chapter by Mary Pierse already contextualizes Mary O’Donnell’s works within an Irish literary scene that was male-dominated. O’Donnell’s first works must be seen, for Pierse, together with a flowering of female production that was starting to find its voice. What all these female authors achieved in Ireland was ground-breaking, as these female Irish writers started to give their insights and views to social, economic, political and cultural issues in Ireland from an inclusive perspective that also had women at its centre. Mary Pierse correctly examines the options undertaken by Mary O’Donnell with her first works and how her writing partook of a common trend in Ireland to contest a long-established gender bias.

The second chapter of this volume is an outstanding examination of Mary O’Donnell’s essays in academic publications, shorter articles and contributions to the media, especially the radio. Manuela Palacios succinctly traces many of these contributions and reads them from the perspective of their value as representative of O’Donnell’s interest in culture at large, and Irish in particular. For Palacios, O’Donnell’s academic production not only positions O’Donnell as an author who also examines her own creative process, but, rather, as an author who questions with an inquisitive mind, many of the contemporary issues that occurred within the Irish literary discourse. Palacios claims the importance of Mary O’Donnell not only as a poet but also as an intellectual and cultural critic that comprehensibly covers Ireland’s culture with her works and views. Pilar Villar-Argáiz offers a brilliant approach to Mary O’Donnell’s poetic oeuvre. In her academic overview of O’Donnell’s poems, Villar-Argáiz scrutinizes the main tenets, tropes, themes, stylistic explorations and features of O’Donnell’s poetic work. This detailed chapter brings to light a concern for O’Donnell’s needed inclusion in new analytical frames that see her as a poet of diversity, multiculturalism and even ecology in today’s Ireland. The next chapter of the collection, by Eibhear Walshe, delves into O’Donnell’s fictional world. Although O’Donnell has only produced four novels to date, Walshe claims that these should be read within a discourse that defines a new Ireland that is in constant change and adaptation. For O’Donnell, Ireland should find its place within a Europeanised liberal society. This view has been represented by O’Donnell in her fictional works in terms of exploration, change, dislocation and adaptation to a new setting that is still transforming Ireland. María Elena Jaime de Pablos approaches O’Donnell’s two collections of short stories and her short narrative production. For Jaime de Pablos, O’Donnell does not shy away from facing cultural critique. Her short prose tackles hypocrisy and directly engages with questions on many issues at stake in Ireland. Jaime de Pablos brilliantly examines how the use of the “mask” by O’Donnell symbolizes a suppression of individual responsibility against social, political, economic, communal and personal problems in today’s world that constantly find representation in her short fiction. Giovanna Tallone engages magnificently with O’Donnell’s position as an artist who is not only concerned with language and words. O’Donnell has often approached the role of the artist in today’s Ireland. O’Donnell has repeatedly shown an interest in the creative process, both her own and that of other artists. This has helped her in understanding experimentation and strategy in writing. The volume ends with an engaging and thought-provoking interview with Mary O’Donnell by Anne Fogarty. Fogarty traces back O’Donnell’s artistic beginnings and places her in a discourse of today’s Ireland, always hinting at O’Donnell’s next writing to come. Mary O’Donnell herself contributes with a short story, as yet uncollected, and winner of the Fish International Short Story Award in 2010.

All in all, María Elena Jaime de Pablos’s edited collection Giving Shape to the Moment: The Art of Mary O’Donnell, Poet, Novelist and Short-Story Writer constitutes, thus, a detailed, illuminating, comprehensive and insightful full-length publication on the works of Mary O’Donnell that will help lovers of this Irish author’s writings approach her poetry, fiction, short-fiction and academic writings with a new light and fresh perspective. For all the contributors to this academic volume, Mary O’Donnell is a clear representative of contemporary Irish writing who establishes a dialogue between art, the literary form and society at large in a new way. The volume’s academic depth makes this study an excellent, clear and definitive critical exemplar of how Mary O’Donnell’s works and her take on the issues that surround her in today’s world and Ireland were in much need of scholarly assessment.