by Deirdre Molumby. This text may be archived and redistributed both in electronic form and in hard copy, provided that the author and journal are properly cited and no fee is charged for access. 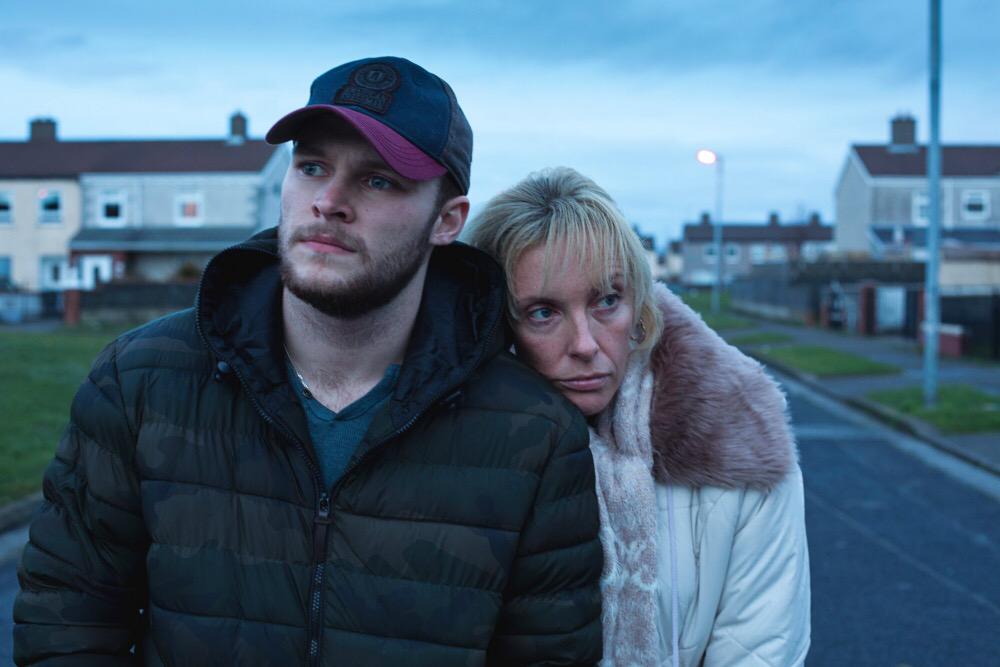 A Revision of the Family in Irish Film: Glassland (Gerard Barret 2015)

Having garnered critical praise and a number of awards for his first feature, Gerard Barrett follows Pilgrim Hill (reviewed in Estudios Irlandeses No. 9)1 with Glassland. While the earlier film focused on a lonely dairy farmer who cares for his critically ill father, Glassland moves to the urban setting of Dublin while continuing the director’s thematic exploration of isolated Irish men who struggle with contemporary Irish life. Jack Reynor plays a young taxi driver who struggles daily to make ends meet and keep those around him safe and happy. His mother Jean (Toni Colette) is an alcoholic who refuses to see her son, John’s brother, Kit (Harry Nagle), who has Down syndrome and has been placed into a care facility. John’s best friend, Shane (Will Poulter), will soon be emigrating, leaving John on his own to piece together his broken family and to help his mother face her addiction head on. Glassland contributes to the Irish film canon by way of its revision of the Irish family, rewriting figures such as the “Irish mammy” and “Irish lad” and through its exploration of the theme of alcoholism.

The “Irish mammy” is a dominant figure that has persistently appeared in popular culture produced by and about Ireland. Exemplified by Brenda Fricker in My Left Foot (Jim Sheridan, 1989) and The Field (Jim Sheridan 1991), the type continues to appear in pop culture today in many forms including advertising2 and the hit television series Mrs Brown’s Boys (BBC 2011-14). Ireland as a country has traditionally been feminised, associated with the Virgin Mother and likened to ‘Mother Ireland’. Gerardine Meaney writes how the “image of Ireland as sweet, wild girl” or alternatively “as suffering and nurturing mother”3 has been common in pop culture. In Irish cinema specifically, the relationship between mother and son has been represented again and again. Ruth Barton and Martin McLoone have identified the recurrence of Oedipal narratives in the films of Jim Sheridan and Neil Jordan, and also in Celtic Tiger cinema.4 As well as the doting mother, Irish film has tended to be distinguished by the absent or ineffectual father figure. According to Debbie Ging, “the dysfunctional father trope persists in contemporary Irish cinema”.5

Glassland expresses consciousness of this traditional mode of representation, seeking to both perpetuate the ‘mammy’ and turn the stereotype on its head. There are in fact three mothers in the film –John’s mother, Jean; Shane’s mother, Bridie (Darine Ní Dhonnchadha); and the mother to Shane’s son, who appears briefly near the end of the film. Bridie is the most traditional ‘mammy’. She takes care of both Shane and John, feeding them and bringing them tea at Shane’s beck and call. In one scene, Bridie joins the boys as they play a game on a Playstation. She warns Shane about his bad language when he curses, and also asks John how his mother is, thus signifying the teaching but also the caring role that is synonymous with the ‘mammy’. She can be a little over-bearing, for example, insisting on taking a picture of John and Shane before Shane leaves to go abroad, and while Shane gives out about this, immediately afterwards (in one of the more humorous moments of the film) she gives Shane his passport, which he almost forgot, before he leaves. She thus proves her worth as the practical mother who remembers everything, and when the boys drive off, the camera lingers on her to capture the sadness of a mother whose child is leaving home.

Bridie works with Jean in a kitchen, which is a notably conservative and traditional space associated with the maternal figure. Jean, on the other hand, is associated with the destruction rather than the maintenance of the domestic space, destroying plates and attempting to tear the house apart at one point in the film when she is looking for alcohol. While she is aggressive and clearly causes John a great deal of anxiety, she also expresses a great deal of affection towards him. When she explains the circumstances that led to her alcoholism (She tells John about how her partner, his father, left when Kit was born, and then her family and friends refused to see her), the character becomes humanised and highly sympathetic. This sense of a three-dimensional character, who is loving but also full of rage, flawed but idolised by John, signifies Barrett’s wish to break down the mammy stereotype and to show the variety of hardships that mothers may face.

The theme of alcoholism is another that sees revision here. Binge drinking is a major problem in Ireland, leading to high rates of depression and death.6 In a recent WHO report, the country was named the eleventh highest consumer of alcohol per capita in the world.7  The “drunken Irish” tend to appear humorously in film, used by auteur John Ford in the past but also in more recent features, for example, Grabbers (Jon Wright 2012) follows a community in a small Irish town who have to get drunk in order to ward off an attack from an alien invasion. In Glassland, alcohol is not glamorised. Rather, the physical, emotional and psychological damage of alcohol addiction is emphasised. When Jean is submitted to hospital after OD’ing, the doctor tells John that she will eventually need a liver transplant, but worries she will not even live to have that operation. “She’s systematically killing herself every day slowly”, he tells John. In the film’s most powerful scene, John has driven Jean to a clinic but she refuses to go in. John explodes at her, saying: “I’m sick of cleaning up your vomit, I’m sick of dragging you in off the doorstep like a fucking animal…I’m sick of watching you walk around that corner to work every morning and not knowing whether you were gonna come home”, eventually screaming “I’m sick of it, I’m fucking sick of it, sick of it, sick of it!” His repeated use of the word ‘sick’ emphasises that his mother’s condition is actually an illness, which is reinforced when the counsellor they see, Jim (Michael Smiley), tells John that what Jean has is a “disease”.

Jim is a nurturing, soft-spoken and considerate character who goes considerably out of his way to help John and Jean. Interestingly, Jim is the only adult man we see in the film. The visual absence of men here (for example, we hear the voice of the pimp who John contacts to borrow money from to pay for his mother’s rehab but do not see him) seems to emphasise the visible lack of male role models or positive father figures in John and Shane’s lives. John’s father has left and while Shane’s is still around – again, the audience never actually sees him in the course of the film – he refuses to come outside to wish his son goodbye before he leaves to emigrate, thus suggesting there is an emotional distance between the two. In the absence of their own fathers, however, John and Shane represent alternative paternal figures who provide more positive role models than what they have been shown. This is evident from the fact that Shane wants to see his son (as opposed to Shane’s father who won’t see his son off), and through John’s taking up of a number of domestic duties traditionally associated with parents. He cleans the house, does the shopping, feeds his mother, puts her to bed, and lectures her about the outcomes of her tantrums. In a particularly tender moment, he dances with Jean in the hospital, having been told by her at home that she misses dancing with his father. Gerard Barrett has said in an interview:

after college I moved to Ireland, and the first thing that struck me was kids parenting their parents. Mothers and fathers battling addiction and it was falling on the kids to pick up the pieces and parent them. A complete role reversal. I found it absolutely fascinating.8

While John and Shane are on the brink of adulthood and do take up parental roles, they also relish the opportunity to act like children again, for example, hanging out in the arcade and playing games at Shane’s house. In their youth, homosocial friendship, participation in leisure activities, and ‘slagging off’ of one another, the young men also exemplify the ‘lad’, a figure that has appeared in Irish film since the turn of the millennium and has been written about extensively in the work of Debbie Ging.9 Here, however, the Irish lad has been rewritten into a more expressive and caring figure than before. While Shane can evidently be aggressive, for example, in his confrontation with the rental store employees, he is also a responsible father, providing child support and determined to see his son. When he is finally reunited with him, they play games together and express great joy in each other’s company, sharing an affectionate hug as they say goodbye. Shane and John talk about the challenges they face in their respective lives with one another, and in the scene where John gives out to his mother outside the clinic, he touchingly expresses a dependency for his mother – “I want my mother back, I need you. You’re breaking my heart every single day”.

As the lead, John is the most important figure in demonstrating this reconstitution of the young lad into a ‘new man’10 who expresses his emotions and is devoted to his friends and family. The casting of Jack Reynor in the role is of great significance in this regard, having previously played ‘D4’ ‘laddish’ types in films such as Dollhouse (Kirsten Sheridan, 2012) and What Richard Did (Lenny Abrahamson, 2012), the latter being his breakthrough role. As the titular character, Reynor brought a sense of menace and maturity to that role that was beyond his years, and the actor received similar acclaim for his role in Glassland. Total Film wrote “this is Reynor’s film and he holds the screen like a pro – always thinking, tapping, twitching with silent fury”.11

This ‘silent fury’ can be seen in the moments where John searches for his AWOL mother, or at work giving taxi rides, and it explodes when he finally confronts his mother about her problem. However, he never expresses dissatisfaction with the way his life has turned out, but simply accepts that he is the one who has to mend his broken family and to put others before himself. At the same time, the fact that when he is alone he often looks through windows, evokes the sense that he feels trapped by life, desires more, and is eager to get out and see new things. The character of John sees new potentials for the Irish father and also revises the image of the Irish son or ‘lad’ in film. In Jean, John and Shane, we are presented not with stereotypes but deeply complex, conflicted, three-dimensional characters which arise from the struggles of contemporary life in Ireland.

The only major shortcoming of Glassland is its ending. In order to borrow money to pay for his mother’s rehab, John is required to carry out some shady work which is ambivalent and confusing to the audience. The repercussions of his final act are also unclear. Nonetheless, Glassland stands out as a well-written and exceptionally well-acted Irish film. Its revision of the Irish family unit could have far extending influences than are apparent at this moment in time.