by David Clark. This text may be archived and redistributed both in electronic form and in hard copy, provided that the author and journal are properly cited and no fee is charged for access. 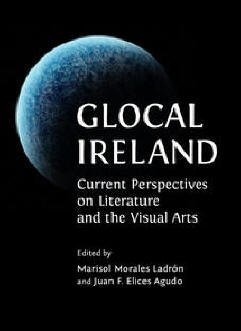 In their introduction to this volume, Morales Ladrón and Elices Agudo justify their use of the portmanteau term “glocal” as a means of encompassing “the dynamics of the search for one’s identity and the cross-current need to open up new boundaries” (2). “Glocality”, therefore, is that area of apparent contradiction in which the devastating effects of globalization interact with the local, often used as a synonym for the traditional, the “known”, the comfortable. For the editors, the two concepts are not mutually opposing, but rather, using Bakhtinian terminology, consist in “the site of negotiation for two forces, one centripetal and one centrifugal” (2) from which, given the perceived interchangeability of both concepts “the glocal emerges as the dialogic point where the two can meet” (2). The situation in Ireland, they suggest, is particularly fruitful as a testing ground for such theories, as the literary and artistic production emerging from the island divulges a continued interest for the specificities of local identity, while at the same time revealing a growing concern for a greater heterogeneity and the multiculturalism which stem from the process of globalization. This book, they state, aims at tracing the movement that Ireland is making “from the local to the global and back again to its origins” (3). The proposal is fascinating, especially given the intense upheaval undergone by all aspects of life in Ireland over the last fifteen years or so. The response to such changes as experienced by the country’s writers and artists is a subject of great interest, and the scholars given the responsibility of analyzing the effect of the intersection of the global and the local in the field of literature and the visual arts represent some of the most interesting academics working in the field in Spain, in Ireland and further afield.

Both Margaret Kelleher and Ruth Barton, responsible for the two essays which make up the introductory section, are well-known and well respected in the world of Irish Studies. Kelleher opens the volume with “From the Anthology to the Database: Old and New Irish Studies”, in which she considers the effect of the new technologies on the humanities in general and in Irish Studies in particular. In Kelleher’s study the vast 1904 edition of Irish Literature is discussed in some detail as a means of shedding light on how the largely nineteenth-century concept of the anthology is being steadily replaced by its early twenty-first century equivalent, the database. Kelleher praises the multilingual aspects of contemporary database projects such as the Drapier project, Irish Script on Screen, CELT and the Spanish-Irish collaboration in the An Foras Feasa Alcalá Project. Ruth Barton deals with the cinematic production of the Celtic Tiger period in her “The Ghosts of the Celtic Tiger”, criticizing the way by which Irish film audiences are accepting the safe narrativization of the Irish past which is being produced for global publics and as such play an important part in the perseverance of negative and stereotypical images of the country, its people and the events from which its history is written.

In “The Paradoxes of Locality”, María Jesus Lorenzo Modia adeptly examines the way in which certain eighteenth century Irish literary works were used as “effective tools” for the instruction of young women in a form of education based on Enlightenment principles in which “the local and the global are inextricably joined” (47). Begoña Lasa Álvarez remains in the century of lights and discusses the literary output of Regina Maria Roche and the way in which the author’s Irish birth was disregarded amidst the global popularity of her Children of the Abbey. Esther Rey Torrijos examines the qualities of speed and space in the works of Elizabeth Bowen, stressing how the contrast between change and permanence, both of which are qualities rigidly associated with the twentieth century, and which bear an obvious relationship with the qualities of the local and the global, have been overlooked by critics. Munira H. Mutran draws on the figure of the sixteenth century Irish leader Hugh O’Neill and the way in which his figure has been portrayed by dramatists Brian Friel and Thomas Kilroy. Mutran’s intelligent analysis centres on the key importance of Seán O’Faolain’s biography of the O’Neill for both playwrights, but stresses the different perspective each gleaned from that work. Juan Ignacio Oliva Cruz ends this section with an interesting appraisal of Jamie O’Neill’s 2002 At Swim, Two Boys which he terms a “kaleidoscopic view” (16) of Irish history in which the author rejects provincialism in an effort to dignify ancestral figures while at the same time renewing the Irish novel.

Pilar Villar Argáiz provides a fascinating chapter on Paula Meehan’s poetry in which she stresses Mehan’s criticism of the noxious effects of the Tiger period greed and their close relationship with other global features of capitalism such as neo-imperialism. Villar Argáiz insists on Meehan’s concern for “the creation of a global poetics” as “the historical trauma of her class spills across national and temporal borders” (114). In her article, María José Claros Morales examines Seamus Heaney’s response to the global in his 2006 collection District and Circle. Heaney, claims Claros Morales, has “gone openly global” (118) in this volume, which expands both geographically and poetically his artistic territory. The “globalised” nature of the relationship between Aidan Higgins and Samuel Beckett is discussed by José Francisco Fernández Sánchez, who stresses the international and strangely postmodern nature of their trans-border epistolary friendship, which in some way highlighted the grey monotony of nineteen fifties Ireland when compared to the brighter perspectives offered by continental Europe.

Stephanie Schwerter looks at the intercultural poetics of Medbh McGuckian who she praises for, in common with other Northern Irish poets such as Heaney and Paulin, their ability to “engage with their own cultural environment from an external standpoint” and thus view the Northern conflict “through the lens of otherness” (139). Schwerter highlights McGuckian’s juxtaposition of Troubles experience with that of diverse European historical events and her plea that the North might shed its past of sectarianism for what she believes to be a more intensely European ideal of solidarity. The contribution by María Losada Friend analyses Washington Irving’s Oliver Goldsmith. A Biography in terms of the New York author’s portrayal of an Ireland based on “a careful, concentrated selection of biased, picturesque features” (157). Losada Friend skilfully hints at the critical validity encompassed in a reading of Irving’s Biography as a means of comprehending certain twentieth and twenty-first visions of the nature of Ireland and the Irish.

“The Turn to the Local”, examines the concept of “glocality” and its practical application in post-Tiger Ireland. Asier Altuna-García de Salazar looks at aspects of the multi-cultural character of contemporary Ireland through the prism of Emer Martin’s narrative which, he argues, provides a critique of closed mentalities within the global realities of the modern world. He emphasises the liberating and universal character of Martin’s fiction found in his “exposition of glocalisation, globalisation, and even glocalmig in literature” (177). Rosa González Casademont contributes a gloriously refreshing account of screen representations of modern Ireland with special emphasis on The Simpsons. González Casademont shows how earlier stereotypes have been substituted for the clichés of Celtic Tiger Ireland. The series, however, playfully relies on the awareness of viewers to the existing stereotypes and as such utilises these to help weaken the “commodified notion of Ireland as a consoling escape from modern life” (191), even now prevalent in much American popular culture.

Guillermo Iglesias Díaz studies the dichotomy that exists between film and reality in his study of Paul Greengrass’s Bloody Sunday and John Carney’s Once, which offers a subtle exploration of what he terms “factual faction” in recent Irish film. Abigail Keating continues the cinematographic theme with an examination of the role of the city in the nation’s cinema. Early filmic Ireland was largely represented by the country, but representation of the city has changed as this has come to be seen as aproblematised location where it is difficult to pinpoint any determined sense of either nationality or internationality. Aída Rosende Pérez ends the section with an attractive piece on the oeuvre of visual artist Amanda Coogan, whose works scrutinize the interrelationship between the female body, patriarchy and Christianity.

This book concludes with two fine interviews with Deirdre Madden and Mary O’Donnell, conducted by Marisol Morales Ladrón and Luz Mar González Arias respectively. Both give wide-ranging insights into the creative process and the works of their authors while providing an eloquent contribution to the overall theme of this book. It would be fair to say that this volume represents an absorbing contribution to scholarship within the field of contemporary Irish Studies. The juxtaposition of the local and the global within Irish written and visual cultural artifacts opens a significant number of questions regarding the position of national and international forms and means of expression, and the movement away from closed insularity towards advance heterogeneity within the context of the “glocal”.