by Auxiliadora Pérez-Vides. This text may be archived and redistributed both in electronic form and in hard copy, provided that the author and journal are properly cited and no fee is charged for access. 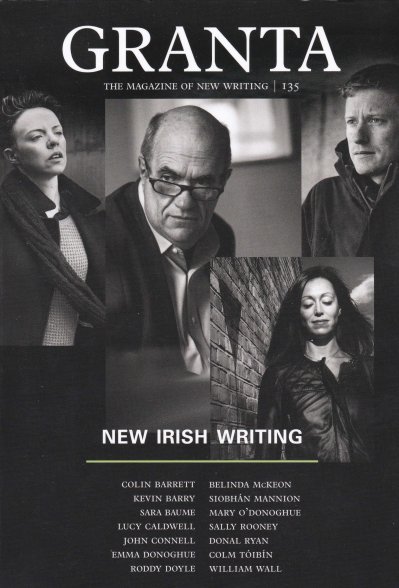 Volume 135 of Granta, edited by Sigrid Rausing (Granta’s publisher), is a much-welcomed collection of new Irish writing. It is certainly remarkable that one of the most prestigious literary publishers in the English-speaking world devotes this issue to recent artistic innovations in Ireland. As the editor observes in the introduction, the literary boom taking place in the country alongside the “exceptional quality” of its literature, testifies to the import of showcasing recent Irish productions internationally. To gather such a sparkling assortment in a limited space is not an easy task, but the result presented here is quite fair. The twenty pieces that comprise what Rausing calls a “country issue” allow the reader to take a quick glimpse of what is being produced on the island in a variety of genres: memoir, fiction (including short stories and excerpts from upcoming books by renowned novelists), poetry and also photography. Taken together, they constitute a substantial approach to the thematic preoccupations and stylistic experimentations of contemporary Irish artists from different generations and backgrounds.

I was immediately captivated by the front cover, which features Eamonn Doyle’s black-and-white photographs of four of the authors – Belinda McKeon, Colm Tóibín, Lucy Caldwell and Colin Barrett. Focusing primarily on their eyes, the photographer displays them looking sideways or simply not staring at the camera. This technique also extends to the images of the rest of the writers included in the collection, who are beautifully photographed by Doyle as well. The photos symbolically spotlight the intense energy of their literary gaze at the past, the present and the future of the country. Indeed, photography occupies a central position in the volume, which attests to the relevance of this artistic medium to a projection and discussion of the current Irish artistic milieu. In this light, the photo essays by Doug Dubois, Birte Kauffman and Stephen Dock render in a very compelling way the strong attachment to the social and natural environment experienced by three disparate Irish communities: a group of teenagers and their coming of age in a Cobh neighbourhood at the risk of social exclusion; Irish Travellers’ timeless bond with animals and nature, and Belfast denizens from both Republican and Loyalist areas in context with the socio-political architecture of the city, respectively.

Similarly, reading the selected texts bears out the fact that artists, whatever mode of expression they employ, are vital agents of cultural interpretation. The authors’ sharp eye for the ordinary and their sensitive practice of intimate introspection demonstrate how Irish literature continues to enlighten us to many of the elements of the island’s broader cultural order, including an understanding of Irishness itself. The complexity of Irish identity keeps being interrogated and negotiated more often than not through the art of the nation. Thus, through the lens of the narrators and poetic personas we are provided insights into the everyday predicaments of individuals inextricably linked to the current state of affairs in the country. Unplanned pregnancies, awkward family relations, economic difficulties, sexual awakening and the residual stranglehold of religion are, among other themes, brought to the fore in an attempt to emphasize their ongoing grip on the configuration of identity on the island. In “Here We Are”, for example, Lucy Caldwell examines the silencing of lesbian sexuality and the concomitant prejudices faced by two teenage Belfast girls who imagined themselves living “free” in their future, our present. Other determining factors for subjectivity underscored in the collection are place and landscape, especially in Kevin Barry’s moving description of Cork as the city that was formative to him; or in Sara Baume’s lyrical story of two cousins who meet at a wedding and “understand how much more powerful than them the crop is, how much vaster than them the field is, how every root and shoot and leaf and grain is commanded by Field”.

With the same intensity and evocative spirit, the poems by Leontia Flynn, Tara Bergin and Stephen Sexton describe personal episodes in which individuals struggle with the constraints of their immediate social reality. A similar vein is perceived in the pieces by authors with a longer literary career – Colm Tóibín, Emma Donoghue and Roddy Doyle – that delicately expose the psychological drives and dilemmas of a range of characters whose existences raise wider questions about human experience. In the case of Tóibín, his story “A Visit to The Zoo”, set in present-day Berlin, can be considered a philosophical essay on family expectations, life and death. Likewise, Donoghue’s text – an extract from her latest novel, The Wonder (2016) – initiates the reader into the intriguing tale of a nurse dealing with a case of “fasting girls . . . reabsorbing, subsisting on their own menses”, directing the reader once again to a revelatory discussion of the female body. And finally, Roddy Doyle’s work-in-progress – “Smile” – closes the collection with a piercing narrative of violence and abuse in which a boy is bullied for being “a queer” and the favourite of the French teacher, Brother Murphy.

On a personal note, this collection has been very illuminating, not only for having rekindled my interest in the short story genre, but also for bringing forward some parts of longer texts that I am looking forward to reading soon. Most gainfully, Granta 135 has introduced me to the work of new favourites Lucy Caldwell, Sally Rooney, Sara Baume, John Connell and Belinda McKeon. However, at this point I must also note that, although the editor seems to have made a big effort to balance the choice of male and female writers, gracefully solving the gender bias that has characterized many anthologies of Irish literature to date, the recent production by non-Irish born writers seems to have been overlooked. Without the direct voices and experiences of these immigrant communities, who articulate firsthand an increasingly multicultural Irish society, this taxonomy of the New Ireland and its writing is effective, heterogeneous and polivocal, but in the final analysis, incomplete. Notwithstanding this reparable weakness, the collection adds to the recognition of Irish literature, and it will be of interest to readers eager to learn what both emerging and established Irish authors are engaged in at the moment.