by Riana O’Dwyer. This text may be archived and redistributed both in electronic form and in hard copy, provided that the author and journal are properly cited and no fee is charged for access. 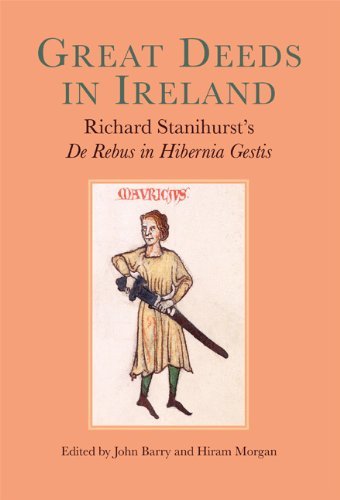 This handsome volume is a new edition of a 16th century account of the Normans’ arrival in Ireland, written originally in Latin by Richard Stanihurst, and published in Leiden in 1584. The Latin text is fully reprinted, accompanied on facing pages by a new English translation of the complete work. This is the first text chosen for publication by the Neo-Latin Seminar at University College Cork, following three years of weekly interdisciplinary seminars in which many leading academics participated. Its editors are John Barry of the Classics Department and Hiram Morgan of the History Department at UCC, who have distilled the discussions of the Seminar and the contributions of many other scholars in libraries in Ireland and across Europe. The resulting book is truly worthy of the Renaissance intellectual atmosphere that it celebrates, as European and Irish scholars wrestled with the aftermath of the Reformation and the political struggles that ensued.

This new edition includes a comprehensive Introduction by the editors; the original Latin text and its translation into English; Stanihurst’s Appendix on Topographia Hibernica by Giraldus Cambrensis (1187); Stanihurst’s own Subject Index to his ‘books on Irish affairs’; an early list of Errata; the texts of two ‘Privileges’ (an early form of copyright protection); followed by the scholarly apparatus of this edition: editorial notes to the translation, a bibliography and index.

To understand the significance of the original text and this translation, it is helpful to consider the career of Richard Stanihurst, and to place him in the context of his time. Born in 1547, he was the son of James Stanihurst, Recorder of Dublin, who was Speaker of the Irish Parliament in 1558, 1560 and 1569. He was, in today’s terms, a higher civil servant, working for the English administration in Dublin. In fact, members of the Stanihurst family had occupied similar roles since 1395 (Lennon 13-24). The Reformation, however, posed a challenge for families such as this and for their patrons, the Norman nobles, who were the leading landowners in Ireland.

Richard Stanihurst was educated at Kilkenny Grammar School, at Oxford University and, for a time, at the Inns of Court in London. His father, it appears, was preparing him to become part of the Dublin administration like himself. In Oxford, however, Richard was the pupil of Edmund Campion, the future Jesuit martyr (canonised in 1970). Campion had been ordained deacon in the Anglican Church in 1564, but was already turning back to Catholicism when Stanihurst knew him. Campion came to Dublin in 1570 and stayed for several months with the Stanihurst family, attending a session of the Irish Parliament while James Stanihurst was Speaker. However, he was already under suspicion of political intrigue, and went into hiding near Dublin with the Barnewall family (whose daughter Janet later married Richard Stanihurst). In 1571 Campion left Ireland secretly and went to Douai on the continent. However, while in seclusion, he had written ‘Two Bokes of the Histories of Ireland’, based on the volumes available in the Barnewall and Stanihurst libraries, which became one of the source texts (along with Expugnatio Hibernica by Giraldus Cambrensis) for Richard’s later writings on Irish history.

After the death of his father in 1573, Richard Stanihurst became tutor to the children of Gerald FitzGerald, Earl of Kildare. In 1575, together with his wife, Janet Barnewall, he accompanied the young heir, Garret FitzGerald, Lord Offaly, to London, where he spent the next few years. While in London, Raphael Holinshed asked Stanihurst to complete the Irish portion of his Chronicles of England, Scotlande and Irelande, which had already been written up to 1509. However, Stanihurst’s account did not meet the approval of the Privy Council, and he was called before it to explain himself. His defence was successful, and he was allowed to rewrite the problem sections of the text. Holinshed’s Irish Chronicle was published in 1577.

However, Richard Stanihurst’s young wife died in childbirth in 1579, and his pupil Garret FitzGerald died in 1580. In Ireland, the Munster rebellion was in progress and the Earl of Kildare was suspected of involvement. In London, it was known that Edmund Campion, now a Jesuit priest, had returned to England. Because of his associations with them, and the general atmosphere of suspicion that prevailed, Richard Stanihurst was arrested in August 1580 and imprisoned for a time. However, he was released eventually and went to the Netherlands, where in 1582 he published a translation of the Aeneid at Leiden, where he registered as a student of languages. Although Leiden belonged to the Protestant United Provinces, there was religious toleration at the university at the time, and several prominent Catholics were working there. Here, in 1584, Christopher Plantin published Richard Stanihurst’s De Rebus in Hibernia Gestis, with a dedicatory preface, an Introduction comprising the first book, three books of narrative history, and an appendix.

Stanihurst wrote his book in Latin, the international language of scholarship at the time, and a natural choice for an author who was addressing an audience in Europe, rather than the more limited readership that might read Holinshed’s Chronicles in English. For exiles like Stanihurst, the public opinion that mattered was that of the scholars, theologians and nobility who were concerned with events not on a national, but on a European scale. Stanihurst might no longer be able to return to Ireland or Dublin, but he could give his country some prominence in the circles in which he was now moving- not specifically Catholic as yet, but university circles where scholarship was prized and where knowledge and debate was disseminated by printing.

The first book of Stanihurst’s work is devoted to a description of the geography of the country and the condition of its people. In his dedication, he explained that he wished, ‘by making a written record, to drag our country out of a long-drawn-out darkness and to stir people abroad to an awareness of our excellent island.’ He wished also to correct misunderstandings about both the Gaelic Irish and the English of Dublin. He identifies himself as one of those ‘who live in the English province and are sprung from British stock’. Books 2 to 4 contain an extended narrative of the Anglo-Norman Conquest of Ireland: ‘the wars and glorious victories of ancestors who crossed from Britain to Ireland’ covering the first forty years of the Norman settlement in Ireland, up to the beginning of the thirteenth century. There are many set-piece descriptions, such as the account of Strongbow’s arrival in Ireland, which occupies most of Book 3. The fourth book deals with the establishment of the Normans in Ireland after the death of Strongbow, and their interactions with King John. This takes the account up to the beginning of the thirteenth century. Working mainly from the account of Giraldus Cambrensis in Expugnatio Hibernica, Stanihurst made several mistakes that the editors discuss and contextualise. As the editors also point out, Stanihurst is credited with first using the term ‘Anglo-Irish’ to describe the descendants of the Normans, developing the phrase recorded by Cambrensis in a speech by Maurice FitzGerald: ‘vt sicut Hibernicis Angli, sic & Anglis Hibernici sumus’, translated ‘Just as we are English to the Irish, so are we Irish to the English’. To complete his work, Richard Stanihurst added an Appendix to his historical account, consisting of excerpts from another Cambrensis text, Topographia Hibernica (1187), with his own notes attached.

Richard Stanihurst’s text did not have quite the positive impact he intended. The controversy it generated is well discussed in the pages of the Introduction, making use of annotations in surviving early copies of the text as well as reactions in print. The editors’ communications with libraries all over Europe are well documented in the list of Acknowledgements, which is an impressive record of the thorough investigations that they undertook. It would have been useful, for the sake of completeness, to include a full biographical note on Stanihurst. His life is described in some detail up to 1584, the date of publication of De Rebus, but his further activities up to his death in 1618 are not described, apart from a passing reference to his second marriage in Antwerp and that he later became a priest.  This aside, Great Deeds in Ireland is an important and seminal book, which should be recommended to every university library and be on the reading list of all those with an interest in the intellectual life of late sixteenth-century Ireland and Europe.