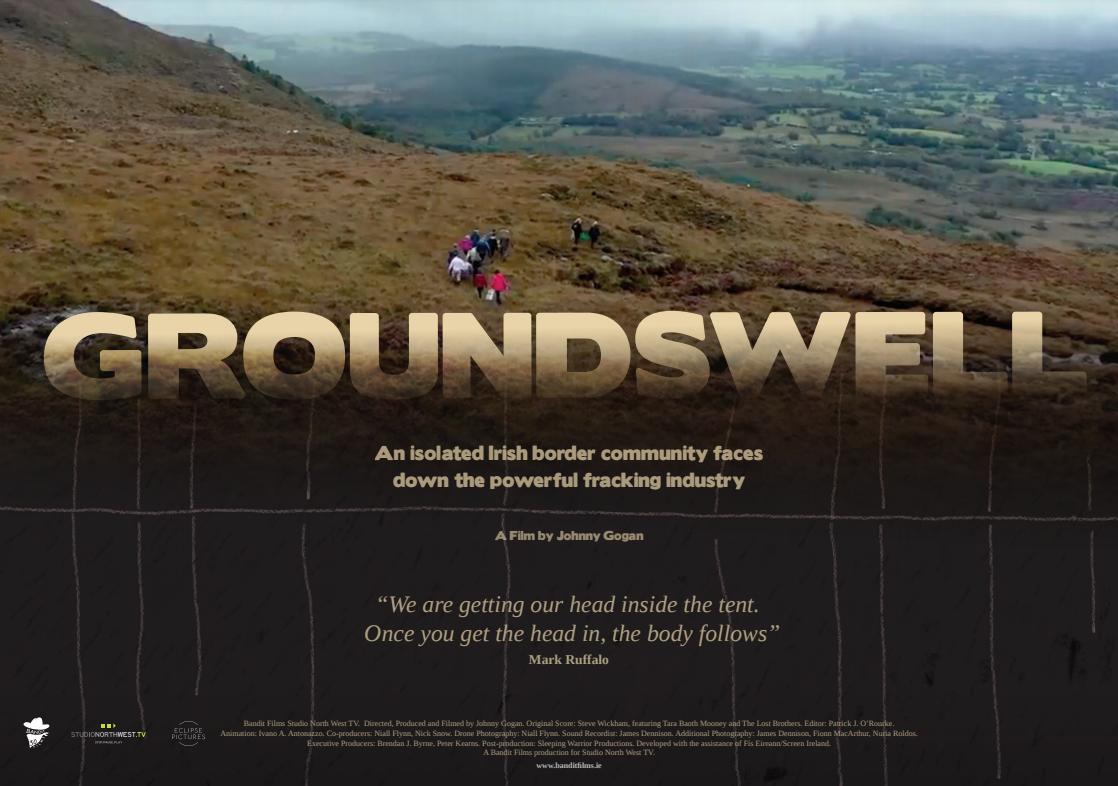 As Stephen Hughes affirms at the start of his 2019 doctoral thesis, Fracking is an emotive issue. Hughes’s dissertation, focused on the “Love Leitrim” campaign, strove to explore what affective practices are evident in the anti-fracking imaginary, detailing love, hate, positivity, enchantment, anger, fear, and more. His analysis examined how emotions such as shock and fear unsettle the community, opening a fracking future that produces distinct orderings of time, space, and society. The study also uncovered political issues such as traumatic memories of Troubles-era violence, the violation of borders, and control and ownership of meaning, land, and resources. In sum, Hughes signalled how scientific knowledge and understanding were insufficient to capture the impact of fracking on communities, pointing to the need to augment this with a “felt and meaningful performative imaginary”.

All of these issues and tensions are effectively visualised and contextualised in filmmaker Johnny Gogan’s comprehensive study of a community struggle to ban fracking in the Republic of Ireland. Gogan, who himself worked on the campaign for nearly a decade offers a perspective which nonetheless offers a broad ranging audio-visual summary of this uniquely Irish movement.

Environmentalists generally take a very dim view of the growth of fracking per se, especially as it has recently developed in America. “Just as there is no such thing as a little bit pregnant, neither is there any such thing as a little bit of fracking. Due to the economies of scale and the required infrastructure, fracking is an all or nothing, shock-and-awe operation. Either the drillers come into an area and plaster it with well pads – or they don’t come” (Steingraber 2011).

The Power of Community Engagement and Activity

Gogan talked of “positive campaigning” and the celebration of what we have as a community, which is always a good place to start in any long and contentious environmental struggle. His co-creator Eddie Mitchell is a local farmer and member of Fine Gael Political party, with both appearing as key protagonists in the documentary. Mitchell was the first to see a “no fracking” sign in the region and had to Google it to find out what it meant. Their accomplished documentary was kick-started with a trip to America and filming fracking on the ground; effectively highlighting what Ireland ought to be concerned about.

Gogan also mentioned his earlier fictional film Mapmaker (2002) – about a cartographer who encounters a long-buried body, while mapping beauty spots on the north-south border – to help signal his ongoing love of landscape, which incidentally encouraged him to move and live in Leitrim. As an area and region, it is perceived as a “sacrifice zone”, being more “easy to exploit”, with north Leitrim constituting the least densely populated area in the European Union. Surprisingly, the locals are apparently perceived as a mild-mannered people, but by all accounts the significance of the level of “under-employed and over-education” citizens within the region was under-appreciated and helped produce effective campaigners who could be mobilised for the long term “Love Leitrim” campaign.

Incidentally, the famous Irish writer William Trevor was apparently driving north and saw “The Ballroom of Romance” (Mayflower) that inspired him to write his famous story. This renowned community space is witnessed several times in the documentary as a safe place for active citizen engagement. Such “creative imaginary” and visualisation of community activity is echoed by the iconic love-heart denoting “Love Leitrim” which was created as an illuminated art-piece and planted on various mountains for all to see, helping to connect with and celebrate a love of landscape and support local community.

The documentary effectively teases out and maps the glue necessary to keep such a campaign together, noting how an early challenge for any protest group is simply to maintain cohesion. In fact one could argue the whole documentary serves as a template for exploring how a community group can effectively deal with an ever-changing political landscape and set of obstacles.

Role and Power of (eco)Media

There is a growing role for documentary and media in general to help spark new forms of environmental and political activism. Originally, eco-cinema scholars tended to emphasize environmental communication as first and foremost a cognitive, rather than an affective or emotional experience. Cognitive estrangement is set up as the first step by which the desired state of environmental awareness might be attained. This is arguably a very narrow, even an elitist framing, with other scholars suggesting that environmental media criticism’s over-arching purpose “should not be to impose a political program – much less pre-defined aesthetic practices – but to help create public spaces for debate and ethical argument over the claims of the environment for a place in political life” (Rust et al. 2013: 3). Popular fiction film, alongside more conventional even activist-driven documentaries like this one, remain an excellent starting point in promoting and also helping to puncture any simple[istic] formulations in dealing with environmental issues, including threats from fracking.

Certainly mainstream environmental documentaries like Josh Fox’s Gassland (2010), snippets of which Gogan shows several times, act as a spur for action and remains a historical model to follow. The image which spurs most global reaction is the presence of methane in drinking water, producing a memorable concrete manifestation and cautionary tale around the ill effects of fracking. This is visualised when a Colorado resident is able to literally set his tap water on fire. More recently, fictional stories like Promised Land (2012) documents rural American resistance (or not) to corporate attempts to promote fracking in a rural region; especially calling out the illusory power of even well-funded pressure groups, while unpacking a range of cover-ups, which are in turn stock-in-trade within this Hollywood subgenre (see Brereton 2020).

Within eco-media we are always looking for new “creative imaginaries” that speak effectively to environmental issues. Groundswell deploys an innovative piece of black and white animation which stands out and helps map out the global effects of fracking and a more “sophisticated” illustration is evident in the opening credit sequence of the recent western televisual series Yellowstone. While this sequence appears somewhat crude, being apparently just dropped into the mise-en-scene, it is nonetheless driven and moulded by a pertinent Steve Wickham song with evocative lyrics including:

“hundreds of trucks … they don’t give a Fuc*…. Just sand and water… we’ve been fractured…. Beware the cute hoor…. When you get fractured… isolation and a bankrupt nation…. money turns good people bad.”

Landscape and its relation to place identity remains a powerful tool for visualising and making legible the effects of environmental change. The director signals this to great effect with numerous drone shots and lovingly-framed environmental images of the landscape. This is significant in an era where inspiring audiences and policymakers/politicians to respond to unsustainable resource usage such as fracking, needs to be constantly kept in public view. By all accounts, resource use, extraction and landscape change, are communicated through such media and highlight the central importance of place identity and landscape (Haarstad and Wanvik 2017). A key through-line argument of the documentary is how landscape remains an important vehicle for expressing anxieties and contexts for resource interdependency, while another is how elements of local and regional identity compete and interact with global concerns, including climate change or globalisation in complex ways.

Telling stories is an essential part of the process of communicating issues around fracking, much less any environmental concerns including the ongoing climate crisis, as the “stories we tell ourselves about the world (about what matters, what doesn’t matter, what is true, what is false) play a significant role in how we regard our world, what decisions we make, what policies we endorse and what actions we undertake” (Pargaman et al. 2017: 177). The other main activist environmental documentary within the Irish canon is Risteard O’Domhnaill’s The Pipe (2010) – focuses on the “Shell to Sea” campaign in Mayo, which similarly spends a long time – made over four years – to capture on-the-ground community activity and resistance to the Corrib gas line.

Within Irish film studies however – as suggested in Brereton and Barrios O’Neill (2020) – landscape has most often been framed through romantic, nostalgic or heritage lenses, especially in postcolonial film (Barton 2004; Gibbons in Rockett et al. 1988), or alternatively as a political prism for exploring conflict and Troubles narratives (Hill in Rockett et al. 1988; McLoone 2000). Furthermore, across much Irish film history, landscape remains commonly attributed to a “green” touristic agenda, rather than an environmental, much less an extractive energy, framework.

Incidentally, Kate Ruddock of “Friends of the Earth”, who also plays an important part in this story in helping to draft a Government bill to ban fracking, represents one of the 100 Irish organisations that signed up to a position which embraces alternative energy, and envisions Ireland as a nation of “energy citizens” who will plan, generate and distribute energy for the benefit of their communities (2017). But how to transcribe these ideals into a viable reality on the ground, while focusing especially on one small community group remains a challenge.

Many scholars are severe on the provenance of contemporary notions of rights in Western notions of property, ownership and identity that are already deeply implicated in tensions around the environmental crisis. By all accounts, many stories foreground the rights to land such as the iconic filmic adaptation of The Field (1990). What lies beneath such precious land reveals pathological desires to control rather than to simply use such extractive resources for the common good. Groundswell alternatively tackles these rights and responsibilities for contemporary society, while highlighting the need for ongoing community solidarity towards protecting the future. While the detail and broad range of interviews and reflections don’t always cohere and may be too much for a non-engaged audience to fully comprehend the overall power of activist environmental community, the documentary nonetheless leaves a strong impression on the mind of an audience. We certainly need more environmentally-themed audio-visual media to speak to the ongoing crisis being faced.