by Mairéad Conneely. This text may be archived and redistributed both in electronic form and in hard copy, provided that the author and journal are properly cited and no fee is charged for access. 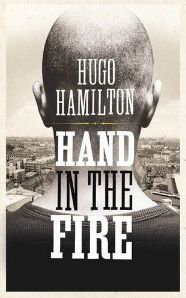 Hand in the Fire by Hugo Hamilton.

Hugo Hamilton understands outsiders. His autobiographical novels The Speckled People (2003) and The Sailor in the Wardrobe (2006) chronicle his childhood and his search for some comprehension of his father’s militant stance on the Irish language, and his mother’s German heritage. Speckled is in itself an important marker and theme in much of Hamilton’s writing to date; its Irish counterpart ‘breac’ best describes the notion of being half-covered or half-spotted, suggesting, perhaps, a person or place which is not complete, or of being cognisant of an absence in one’s character, for example. In his latest novel, Hand in the Fire, we are introduced to a Serbian carpenter, Vid, who is struggling with the linguistic and psychological demands of living in a country where things are very different indeed. However, Vid is not the only character in this novel that is adrift. He meets Kevin Concannon, a lawyer, and quickly realises that the Concannon family, like himself, have their own secrets, their own untold tales. Vid’s own past is confused and he details very little of his family’s history until quite late in the book, maintaining throughout most of the story that he has lost his memory. When Kevin advises him to go to Dursey Island, ‘don’t tell anyone that you haven’t been there’ (4), Vid travels south to find himself lost and even more detached from the mainland he is attempting to understand and integrate into. He is searching for a ‘rough guide on how to fit in as much as possible […] I wanted to belong here’ (6, 7). Vid wishes, above all else, to enjoy ‘spectacular friendship’ (7) in Ireland; Kevin later equates putting your hand in the fire with true friendship, and yet much of this dark and brilliantly-paced book concerns itself with water, with islands and with the slippery subjects of memory and forgetting.

Vid and Kevin’s lives become entangled when Kevin intercedes rashly on Vid’s behalf in a street fight. The fracas arises from a clear misunderstanding between the eventual victim and Vid himself, though there is a clear racist undercurrent throughout. Kevin’s intervention reveals his darker, more troubled side. Vid is given work in the Concannon family home partly to calm his fears about Kevin’s actions on the night of the attack and also to provide him with a semblance of welcome and opportunity. Curiously, Kevin advises Vid that Ireland ‘is an island […] [y]ou can never completely trust what you hear. You have to forecast what’s behind the words’ (67). Before long, Vid hears about the drowning of Máire Concannon; an aunt of Kevin’s on his father’s side, who was pregnant outside of marriage, and who apparently drowned and was found washed up on the Aran Island of Inis Mór. Kevin’s advice about double meanings and deception rings true as Vid’s search for answers leads him to the West of Ireland and to the realisation that his own past has coloured his present. Tracing what happened to the young Concannon girl mirrors his own need to address and come to terms with what happened to him in his earlier life. The girl’s story, nonetheless, brings another layer of eerie national history into play; she was denounced from the altar and left to carry a heavy social and personal burden. Her death, either accidental or self-inflicted, and her appearance on the shores of Aran, poignantly illustrate the ways in which memory is pushed to the fringes and only recovered on the edges. The place where the girl’s body washed ashore is known as ‘Bean Bháite’, or ‘Drowned Woman’; her name forgotten but not her fate. However, Vid does not reveal his search for the truth, nor does he achieve any real closure for himself or the tragic girl. Though the mystery of this story provides the backbone for the novel, it drifts in and out of the narrative and, as suggested by the notes which Hamilton provides, never reaches any satisfactory conclusion. This is attributable, one imagines, to the circumstances of the time of the drowning.

Another mystery continues, nonetheless, in the shape of Kevin’s father, and it is Vid, once again, who must confront the uneasiness which the patriarchal figure’s absence brings to the family home. The outsider, who is at times stymied by his inability to communicate fully, sees much more than the insider, and the insider, in this case Kevin, embroils Vid further in the difficult history of his own family tree. When Vid becomes the contact point between the Concannons and Johnny (the father and husband), he makes an important observation about the drowning that could just as easily frame his immediate family’s narrative: ‘[o]ver the years the tide brought in more and more rumours after her […] [l]ike the truth, I suppose, coming and going all the time’ (210). Through his sometimes-fraught friendship with Kevin, Vid is provided with a perturbed understanding of Irishness, loaded with turns of phrase and nuances which may never be learned in full, and yet Vid dives into the depths of his new homeland, aware of the ever-present dangers. His attempts to right wrongs and to bring closure to his own wounded past and to that of Máire Concannon inevitably leads him to comprehend how the unsaid and the unfixable are central to the Irish character. His desire to repatriate Máire’s body to Furbo, from where she drowned, best illuminate his own desire to correct his own story. However, too much has happened in the spaces between then and now.

Hand in the Fire is a beautifully-written novel, full of Hamilton’s astute observations on the dual nature of the outside-insider. But it is also a dark study of the process of remembering and of living in a country where the past is both glorified and forgotten.