by Verónica Membrive. This text may be archived and redistributed both in electronic form and in hard copy, provided that the author and journal are properly cited and no fee is charged for access. 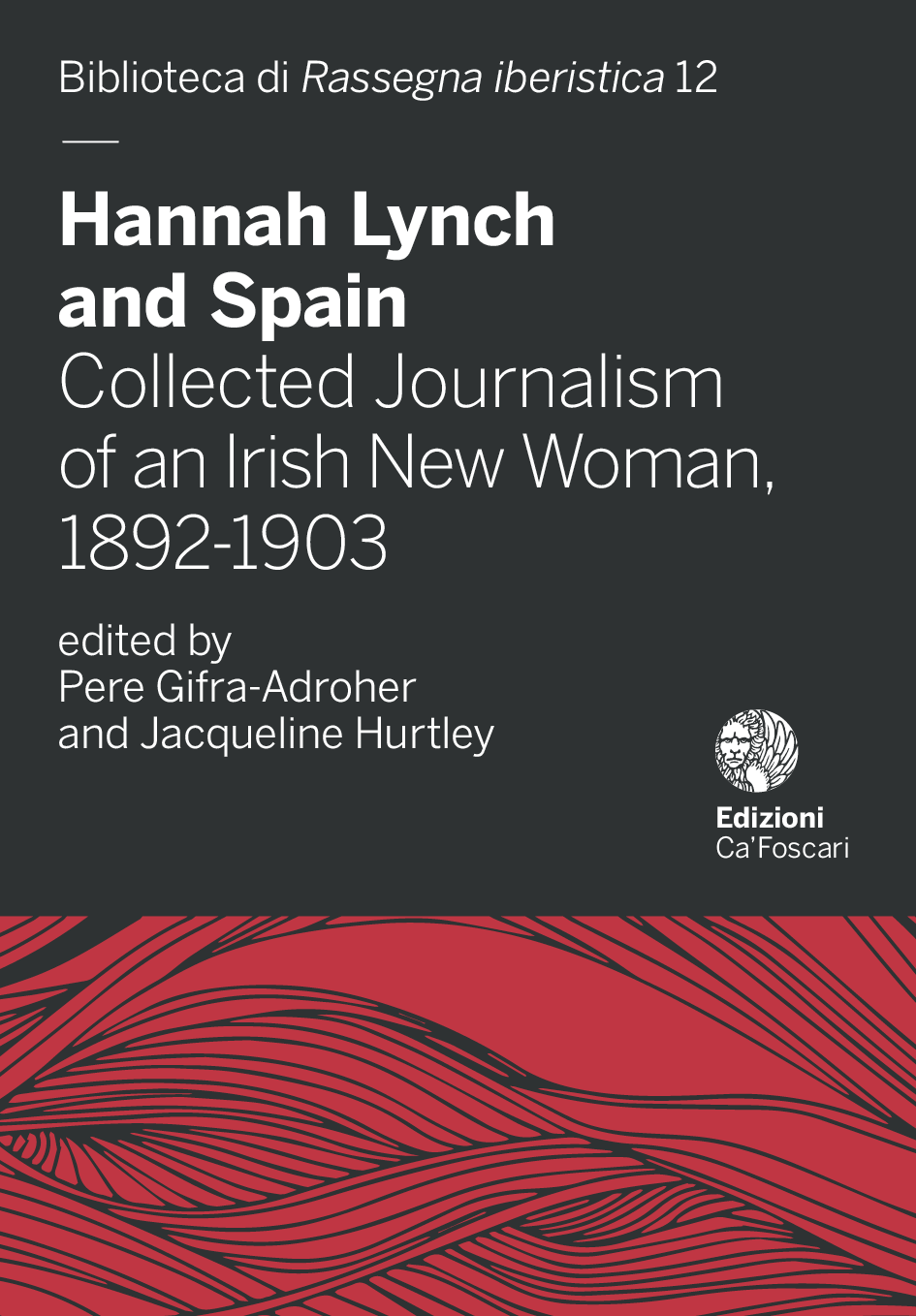 After publishing the biography of Walter Starkie in 2014, in which Jacqueline Hurtley showed her interest and insight on Irish writers who lived in and wrote about Spain, she has now turned her attention to the Irish writer and journalist Hannah Lynch (1859-1904). In collaboration with Pere Gifra-Adroher, this book complements Binckes and Laing’s biographical account of Hannah Lynch 1859-1904: Irish Writer, Cosmopolitan, New Woman, recently published. Both books coincide in the inclusion of the term “New Woman” in the title, as it would mark Lynch’s entire literary and journalistic career. As it happened with the Match Girls and the Ladies’ Land League, the Irish New Woman turned out to be a cultural sensation at the end of the 19th century since this group experimented with the female character in their literary production and “the specific context of this foundational group of New Woman writers at that particular point in Irish history facilitated their breach with the dominant culture, giving them the impetus and the tools to construct alternate social realities in their fiction” (O’Toole 2013: 2).

By the time Hannan Lynch sojourned in the country, Spain’s economy was mostly based on agriculture and the colonial disaster of 1898 and the rise of the Catalan independent movement elicited a reversal of Spanish self-identity as a global power to the emergence of a decadent self-perception. The already well-established links between Ireland and Spain were not exclusively military, trading or religious, and the extensive Irish commercial activity in Spain played “an important role in the industrialization of Andalusia in the 19th century” (García-Álvarez de la Villa and Terry 2016: 79). By this time, the interest in Spain was not exclusive of British Romantic travellers in the 19th century. In fact, we find Irish travellers such as the historian Martin Haverty,[1] who visited Spain for three months in 1843 and published Wanderings in Spain in 1843 (1844). The research on Haverty’s trip to Spain revealed that he found some similarities between Spain and his native country, for example when he described flamenco and considered that he could compare it with “the Keena, or ‘funeral cry’, as it is heard in the West of Ireland” (Haverty 1844: 146); or the posadas, “somewhat in the same style as we find in mud-built houses in Ireland” (143). Another example would be Michael Joseph Quin,[2] another journalist who visited the Iberian Peninsula in 1822. He reported his experiences in Spain in 1822 and 1823 for the Morning Herald, which were published in book-form as A Visit to Spain later in 1823. Although he was not “immune to the ever present stereotypes which fill travel literature on Spain throughout the ages” (López-Burgos del Barrio 2005: 342), he became surprised by the similarities between his native country and Spain, specifically in Vitoria (Basque Country). Unlike British travellers of the 18th century and the beginning of the 19th century, these two Irish authors did not consider their journey as that of a professional traveller nor did they look for the picturesque or the sublime in the country. Their aim was to inform about the social and political changes happening in Spain after the first Carlist War (Krauel Heredia 2005: 323). These two examples would suggests that the Irish travelling and journalistic experience to Spain in the 19th century was exclusively male. However, Gifra-Adroher and Hurtley’s book on Lynch defies that conviction and places great value on this Irish female writer’s contribution to the cultural links between Ireland and Spain. Lynch’s journalistic pieces show that she travelled around many Spanish cities and stayed in Barcelona visiting her sister Nannie who worked as a governess, something that other Irish female authors such as Kate O’Brien or Maura Laverty would do in the 1920s in the Basque Country.

The book is divided into two main parts. The introductory section does not only include a summary of Lynch’s personal and professional life and a description of Irish and Spanish society of late 19th century, but also an accurate a very well researched critical approach to Lynch’s personal and literary Spanish experience. The second part collects Lynch’s nineteen articles on Spain in a chronological order from 1892 to 1903. The significance of this book stems from its special attention to Lynch’s literary image of Spain in her fiction and collected journalism to demonstrate that the Irish gaze has its own features separated from the traditional romanticised representation of Spain conveyed by British travellers and visitors for centuries. Even if the book acknowledges Lynch’s romanticized representation of the country in some occasions, it remarks how the author also tended to search for unexplored cities and give her critical views on Spanish politics and religious issues. Nevertheless, Lynch’s journalistic accounts on the country go beyond a social critique or commentary on the backwardness of the country, since parallelisms between her native country and Spain arise many times: “Ireland remained a presence or point of reference in Lynch’s work. It is woven into her Spanish articles, from first to last, as well as into her fiction” (Gifra-Adroher and Hurtley 2019: 27). Besides, the second standpoint to be underscored in this book is the content devoted to articulate Lynch’s emphasis on Spanish women and their roles in Spanish private and public life since which “repeatedly surfaces” her writing (Gifra-Adroher and Hurtley 2019: 44). She was familiar with 19th century male gaze on Spain and decided to put the spotlight on the unbalanced female experience in the country, and two articles on violence towards Galician women and her indignation are worth noting.

Of particular interest is the subsection titled “Spain and the Irish Gaze”. According to the authors, Irish travellers to Spain became “curiosos impertinentes” (2019: 33), as these imagined the country according to previous Romantic travellers. However, by reviewing an acknowledging the increasing presence of Irish writers (mostly male) in the country during this century and afterwards, this section stands for the relevance of Hiberno-Spanish relations through centuries and the establishment of a distinctive literary gaze on the country. The subsection that addresses Lynch’s novel set on Spain Jinny Blake (1897) is noteworthy too as the central character is a strong woman who resembles those characters found in Kate O’Brien’s Mary Lavelle and Maura Laverty’s No More than Human since all of them struggle to overcome “boundaries of class, gender and space” (Gifra-Adroher and Hurtley 2019: 66) in a place considerably more backward than other European countries, particularly for women. Finally, the closing subsection reviews Lynch’s travel book around Toledo, titled Toledo: the Story of an Old Spanish Capital (1898) with a special focus on its artistic value. To sum up, this critical edition and collection of Hanna Lynch’s writings on Spain is a thorough and illuminating study that highlights not only the figure of this Irish female writer and her unique gaze on the country but also the importance of further examining literary Hiberno-Spanish links, specially from neglected or overlooked female writers that would convey their Spanish experience in fictional works or travelogues, for whom it could be claimed that Lynch would act as a precursor.

[1] Martin Haverty (1809-1887) was an Irish historian and journalist who reported his extensive journey around Europe (1851) in his newspaper articles.

[2] Michael Joseph Quin (1796-1843) was an Irish journalist and editor who founded the Dublin Review, a Catholic periodical. He also travelled extensively around Europe.