by Deirdre Flynn. This text may be archived and redistributed both in electronic form and in hard copy, provided that the author and journal are properly cited and no fee is charged for access. 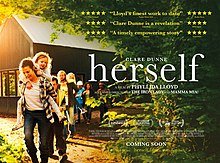 It seemed fitting that I sat down to watch this film when the number of homes available to rent in Ireland had fallen to an all-time low, with just 712 properties available to rent in the city of Dublin in February 2022. Since Herself was first released to the festival market in 2020, rents have also risen by 10.3%. And during the same time, family homelessness in Ireland increased by 10% with 169 families, involving 424 children, in emergency accommodation for over two years. While Covid may have delayed the full release of Phyllida Lloyd’s film, the housing crisis it depicts has only worsened. However, this film is not just about the homelessness crisis.

Clare Dunne’s note-perfect performance tells the story of mother-of-two Sandra, who leaves her abusive husband and is moved into emergency accommodation. Sandra and her two young girls, Molly and Emma, are stuck in one tiny room in an airport hotel. They must use the back entrance, play in the carpark, and with no cooking facilities are limited to takeaways. Sandra is struggling, getting the girls to school, working two jobs, making all her social worker meetings, and providing Gary, her abusive partner, with access to the children.

The story is all too familiar. In 2020 there were 57,277 calls to local and national domestic abuse helplines, and 23,875 incidents reported to Gardai. According to Allison Graham of Saoirse Domestic Violence Services, there are only “144 refuge spaces available across the entire country, [and] domestic violence services faced unmet requests for refuge from 1,351 women between March and August 2020” (Gleeson 2021). As she tells her daughters in the opening sequence, there are loads of Sandra’s in Dublin, and as the statistics show, all around Ireland.

While the situation for domestic abuse survivors is completely deplorable in Ireland, this has been exacerbated by the housing crisis. With little or no homes to rent, and those that are available way above the budgets of Housing Assistance Payment (HAP) or single parent families, and many calls left unanswered, women like Sandra are left in limbo in the multitude of hotels across the capital. Sandra’s exceedingly kind social worker Jo, played superbly by Cathy Belton, is overwhelmed, disorganised, overworked, but unable to help; her ex-husband is full of promises and offers of a stable home, yet Sandra perseveres in the hotel. Indeed, the film is populated with a supporting cast of characters dealing with similar housing issues: Emma, Dariusz, Yewande and Tomo are all living in a squat in Ranelagh, for example. The diverse faces on screen showcase a more multicultural and inclusive Ireland (Daniel Ryan, in particular, is fantastic as Francis, son of the cranky builder Aido), but also those who are most at risk from our out-of-control housing situation. While there are suggestions and hints to their situations and back stories, however, these characters are not fully explored in the film.

With the dual story of housing and domestic abuse, there is a lot resting on the shoulders of the only fully realised character, Sandra. Played by the co-writer Clare Dunne, Herself is an excellent vehicle for her range. She doesn’t allow the character to descend into stereotype or overt sentimentality and injury. Dunne’s performance is noteworthy. She’s an incredibly likeable, and well-rounded character, and throughout you want her to succeed, when door after door is closed in her face. There is a journey here, and Dunne allows the viewer to watch those changes and see her gain her agency. There is a lot for Dunne to carry, and at times the story could benefit from some refining to maintain focus. The wrist injury that Dunne sustains is never fully developed or resolved and feels unnecessary to the narrative.

Sandra, following a YouTube channel where the presenter promises that just under €40,000 will build you your own home, does the maths, and suggests to her social welfare officer, that providing her with a vacant lot and funding to self-build would actually save them money in the long run. But common sense and logic aren’t of interest at the social welfare office, and the grimly bureaucratic system the film critiques is well captured here. That is, until Sandra is lucky enough to find a hero: Dr Peggy O Toole, for whom Sandra works as a cleaner. After stumbling across Sandra’s internet history, Peggy decides to help, by offering her a site for this self-build, in the exceptionally large back garden of Peggy’s leafy Dublin centre home. At this point, Herself swerves away from gritty Loachian realism and into fairy godmother territory. Is there a Dr Peggy O’Toole for all of us? Can all the wealthy retired doctors of Ireland open up their very large gardens so we can live in a 12m x 4m tiny home?

There is much to love about this film: it is beautifully shot, it is well paced, the topics are sympathetically presented. Tom Comerford’s cinematography is exquisite, finding beauty and softness in urban spaces. His use of light and shade in locations that do not lend themselves to softness, like the concrete multi-story carpark where Sandra watches her kids learn to skate is wonderful. However, the film will suffer comparisons to another movie about the Irish homeless crisis, Rosie (Paddy Breathnach 2018). That film takes place over 36 hours of Rosie’s life, and clearly intersect with the early sections of Herself as Rosie and her family (which also includes Molly McCann, who also plays Clare Dunne’s youngest daughter) struggle to find stability after homelessness. Rosie, however, doesn’t succumb to the same level of fantasy as Herself, and as they count down the hours to a night in the car Rosie becomes reminiscent of Loach’s I, Daniel Blake, while Herself pulls back from that level of gritty realism when it comes to homelessness, arguably to the film’s detriment.

The film excels in its depiction of what domestic abuse survivors have to go through, doubly injured by an unfair and difficult system. Throughout the whole film the bureaucratic red tape and unreasonable processes are precisely depicted: Sandra, for example, is penalised when her youngest daughter, who witnessed the abuse, doesn’t want to attend visitations with her father. And while the moment of agency should be Sandra building her house, it is really her moment in court when she finally speaks up for herself and her children. The film sidesteps a darker realism again at the end, however, and Gary’s mother calls to visit Sandra and tells her that Gary is going away for a long time. I find it easier to believe that a rich doctor will provide land for a house for a woman who cleans her home, than that the narrative of domestic abuse which has shadowed the film could be so neatly and sentimentally resolved.