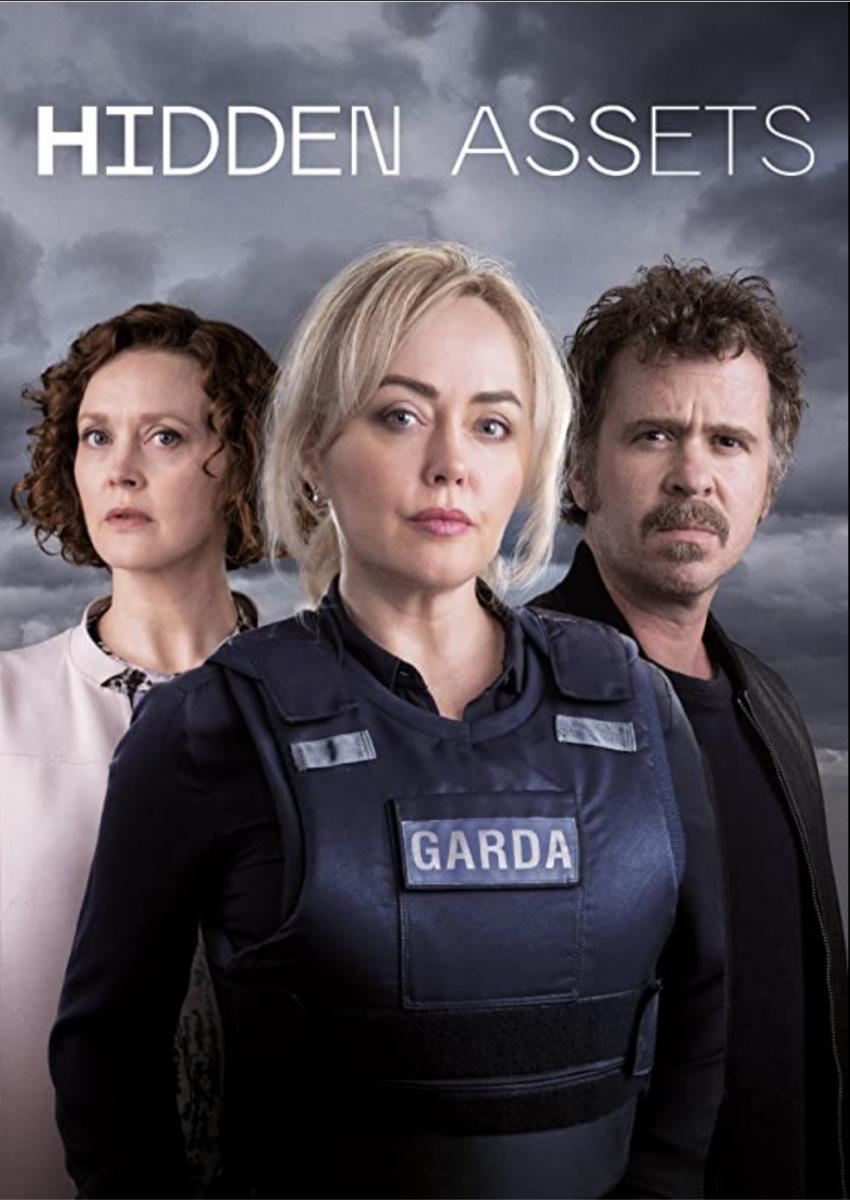 RTE’s latest flagship drama series, Hidden Assets (starring Angeline Ball; written by Peter McKenna and Morna Regan) premiered on the Sunday night Drama on One slot last week. The series, like the vast majority of the station’s major drama productions in recent years, is an international affair, bringing together production companies from Ireland (Saffron Moon Pictures), Belgium (Potemkino) and Canada (Facet 4). It’s the second time this production partnership has assembled to produce RTE drama, following 2017’s Acceptable Risk, in which Ball played the same character, Detective Emer Berry (despite a mysterious surname adjustment in the meantime). Like that production, Hidden Assets was co-commissioned by the US streaming service Acorn TV, which specialises in developing, producing and acquiring English-language programming, much of it in the mystery, comedy, and police procedural genres, from the UK and other anglophone territories.

Hidden Assets represents the latest in a lengthening line of RTE-Acorn projects. The relationship commenced with the Amy Huberman drama/comedy vehicle Striking Out (2017), followed later that year by Acceptable Risk. The synergy intensified when RTE recruited Dubliner Shane Murphy, one of Acorn’s London-based production executives, as its Group Head of Drama and Comedy in 2018. The accompanying press release highlighted Murphy’s extensive global experience in TV drama, much of it in the international co-production arena. And although Murphy left RTE earlier this year, his three-year stint at Montrose brought several more Acorn projects into the RTE fold. The US streamer co-originated a significant chunk of RTE’s drama and drama/comedy content during this period, including Finding Joy (2018-2020), Dead Still (2020), and The South Westerlies (2020).

What should we make of this relationship, and the curious range of programming it has spawned? As the national public service broadcaster, RTE has a duty to “reflect the democratic, social and cultural values of Irish society”, according to its Public Service Charter. This admittedly wide remit is nevertheless harder to achieve under circumstances of international co-production, when alternative and possibly conflicting cultural and commercial values come into play, with imperatives to succeed in multiple TV drama markets invariably impacting on the look, feel and sound of the resulting work. RTE’s recently concluded crime drama Kin (also written by Peter McKenna) is a case in point. That show’s odd phrasing, unusually diverse casting, and overwrought noir elements are arguably more suited to the US market served by its co-commissioner, AMC Networks. It’s one thing for RTE to buy in overseas content made for an international market, quite another to produce its own material – using considerable amounts of public money – with similarly “international” ambitions, if the need to serve international markets undermines that public service remit.

Whatever these concerns for the Irish broadcaster, there’s little doubt that RTE’s involvement, and the international co-production status it solidifies, is of value to Acorn, AMC and RTE’s other production partners. International co-productions facilitate easier access to specific international markets. They also, of course, enhance opportunities for production subsidies in the co-producing territories. Hidden Assets is no exception. The production was supported by Screen Ireland (€300,000), Screen Flanders (€200,000), the Section 481 tax credit (between €500,000 and €1 million), and the Belgian Tax Shelter (amount undisclosed). Post-production took place in Canada, allowing access to the Quebec Production Services Tax Credit and further Government of Canada funding incentives, as indicated in the show’s credit roll.

In an unusually revealing interview with Laura Slattery of The Irish Times, Hidden Assets producer James Mitchell suggested the six-part drama had a budget of around €1 million per episode, some of that driven by extra costs associated with the Covid-19 pandemic. He also indicated that, in Ireland, broadcaster advances and production subsidies generally provide up to two thirds of the production budget. While the Belgian subsidies are evidence that eight of the twelve reported shooting weeks were spent in Antwerp, the decision to locate only post-production in Canada – despite an emerging Canadian sub-plot in the storyline – was apparently the result of a costly learning experience during the production of Acceptable Risk.

International coproduction is of course built on such experiences and relationships developed over time as producers seek to develop new intellectual properties and new markets in which to exploit them. One wonders, though, if the national broadcaster is creating too much dependence on this Acorn-inflected production chain – especially when you consider that Acorn’s corporate parent is AMC Networks, the US cable and streaming provider with whom RTE collaborated for Kin. On the other hand, it’s worth noting that AMC, through its “boutique” range of offerings including Acorn, Sundance Now, BBC America and IFC Films, seeks to differentiate itself from streaming giants like Netflix and Disney+ precisely by offering non-mainstream niche content from independent and international producers. In that sense, its development goals are very different from those of its competitors.

It will be interesting to see if the RTE/Acorn/AMC connection will survive Shane Murphy’s quiet departure from RTE. A lot may depend on the fate of Kin and Hidden Assets in the US markets, and whether either one of these expensive productions gets renewed for a second series. That in turn may depend on economic and competitive pressures far removed from the RTE campus at Montrose.