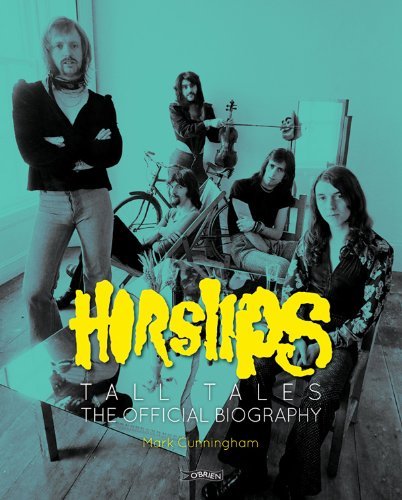 At last, musicians played traditional tunes in a lively, innovative way that made an Irish boy feel “proud” rather than “pathetic’. So Maurice Linnane recalls when he heard Horslips as a boy on the radio, in this large-format biography of the pioneering 1970s Celtic rock band. Mark Cunningham, himself a musician and producer, integrates reminiscences from each of the five members, along with archival material from photos and media. This handsome design intersperses thoughtful analyses and entertaining stories into editorial commentary on gigs, recording processes, albums, critical reception, and career moves.

Having grown up with Beatlemania, as well as an eclectic exposure to Irish music and culture, four of the five musicians first met in 1970 to mime a “suitably hairy” band for a Harp commercial. Three of them worked in advertising and promotion; the real band they then formed was determined to remain in Ireland and to retain control of not only its music but marketing and presentation. Bassist Barry Devlin defines this “funky ceilidhe” approach to “deconstruct tunes and use them as the basis for new material’; Violinist, guitarist, and concertina player Charles O’Connor agrees that the band would “transfer melodies” from traditional sources. By the end of 1971, they electrified dancehalls in more ways than one. Appealing to the emerging glam rock movement, they dressed in leather, snakeskin, and even curtains from Clery’s. Suitably, they also blended a bold visual look with fresh sounds.

Horslips may have confessed no “cultural responsibility to incorporate the traditional context; it just evolved” as keyboardist, piper, and flautist Jim Lockhart avers. But it captured attention soon, as the band knew not only how to work the media but to work themselves in an intelligent, disciplined fashion. By 1972, their self-released debut, Happy to Meet, Sorry to Part made them Ireland’s first home-grown rock success. Follow-up The Táin mingled Yeats’ treatment of Cú Chulainn with Old Irish sources, bypassing Thomas Kinsella’s translation as “too recent” for lyricist and percussionist Éamon Carr. These “indigenous” inspirations mingled with superheroes and Marvel Comics for Carr, a poet who also began to sprinkle into songs his verse patterns filtering both the Beats and Basho.

Turlough O’Carolan’s life story flowed into their third album, Dancehall Sweethearts, but that and its overproduced, more mainstream if lackluster follow-up loosened the intricate fit of rock with folk which had made their first pair of LPs critically and popularly successful. An acoustic Christmas-themed album mid-decade revived their spirit, enthusiastic reception on tours at home and overseas increased, and by 1976, their arguably most consistent and most powerful record emerged. A teenaged guitarist, soon to be known as The Edge, attended his first rock concert at Skerries. He was so impressed by Horslips that he resolved to join classmates who became U2. A triple-movement “Celtic symphony”, the Book of Invasions managed to slip a stanza stolen from Swinburne and what Carr calls a “Bowie-esque whiff of alienation” into a confident examination of origin myths.

The Famine and immigration continued as themes in Exiles (1977) and The Man Who Built America (1978). The latter used Mici Mac Gabhann’s memoir Rotha Mór an tSaoil to ground its narrative. Reflecting this novel mix of Irish heritage and American reinvention, Devlin and O’Connor appear to have sought a polished, slick musical delivery, in an era when arena rock and punk competed for loyalty among fans split over the merits of progressive rock’s concept albums and mythic lore. The other three musicians preferred to ground a “stadium rock sheen’, as guitarist Johnny Fean puts it, within a firm foundation balancing an accessible radio-friendly sound with their obvious strength, as shown best in Táin and Book, of a carefully constructed interplay of Irish narrative and trad tunes.

Devlin reminds readers of the band’s lucky inheritance. They grew up exposed to both rock and Irish music, and they learned as they grew older from traditional players. Unlike their English peers, Horslips had no need to create a song-cycle about elves: “We’re pinching from a culture that’s alive”.

Cunningham’s book understandably relies on storytellers who regale us with life on the road as well as in the studio. While cultural examination is unsurprisingly understated compared to tall tales (with their Irish license plates and accents, they get mistaken for subversives in a jittery Troubles-era London and Wales, as well as for the Baader-Meinhof Gang in Germany), a reader nonetheless gains some sense of how Irish identity infused their music and lyrics, and their concerted effort to retain an image that would appeal to all in their divided homeland as well as far afield, during a tumultuous era. One senses that, as Devlin produced some of U2’s early demos, those four Dubliners learned some crucial lessons about a similar ambition to stand for an island which united disparate factions.

This underlying legacy endures. Despite the band’s weariness by their last studio album in 1979 to reconcile its image as “conceptual rockers” into a “post-punk landscape”, upon which U2 would capitalise, their live act ensured their enthusiastic reception past their breakup in 1980. Cunningham documents the subsequent careers of the five men in a variety of the fine arts, their legal battle over reclaiming rights to their songs, the remasters and reissues of their twelve albums, museum exhibitions on their Irish impact, and their eventual reunions from 2009 on.

A couple of slips show: a transcription has Devlin remarking on an “alter” boy and elsewhere crediting the short story “The Trusting and the Maimed” to “Flannery O’Brien” rather than O’Connor, which nonetheless might have made Myles na gCopaleen chortle. But overall, research results in a welcome survey of the band’s Irish impact. A thorough discography is appended; supplemental sources are listed, including my article in Estudios Irlandeses 3 (2008): 132-142. The band’s genial discussion, enriched by those who join them here, creates an enduring appeal. This recommends Tall Tales: The Official Biography to those who will be quite happy to meet them, and surely sorry to part.