How Belfast Got the Blues: A Cultural History of Popular Music in the 1960s

How Belfast Got the Blues: A Cultural History of Popular Music in the 1960s

by Áine Mangaoang. This text may be archived and redistributed both in electronic form and in hard copy, provided that the author and journal are properly cited and no fee is charged for access. 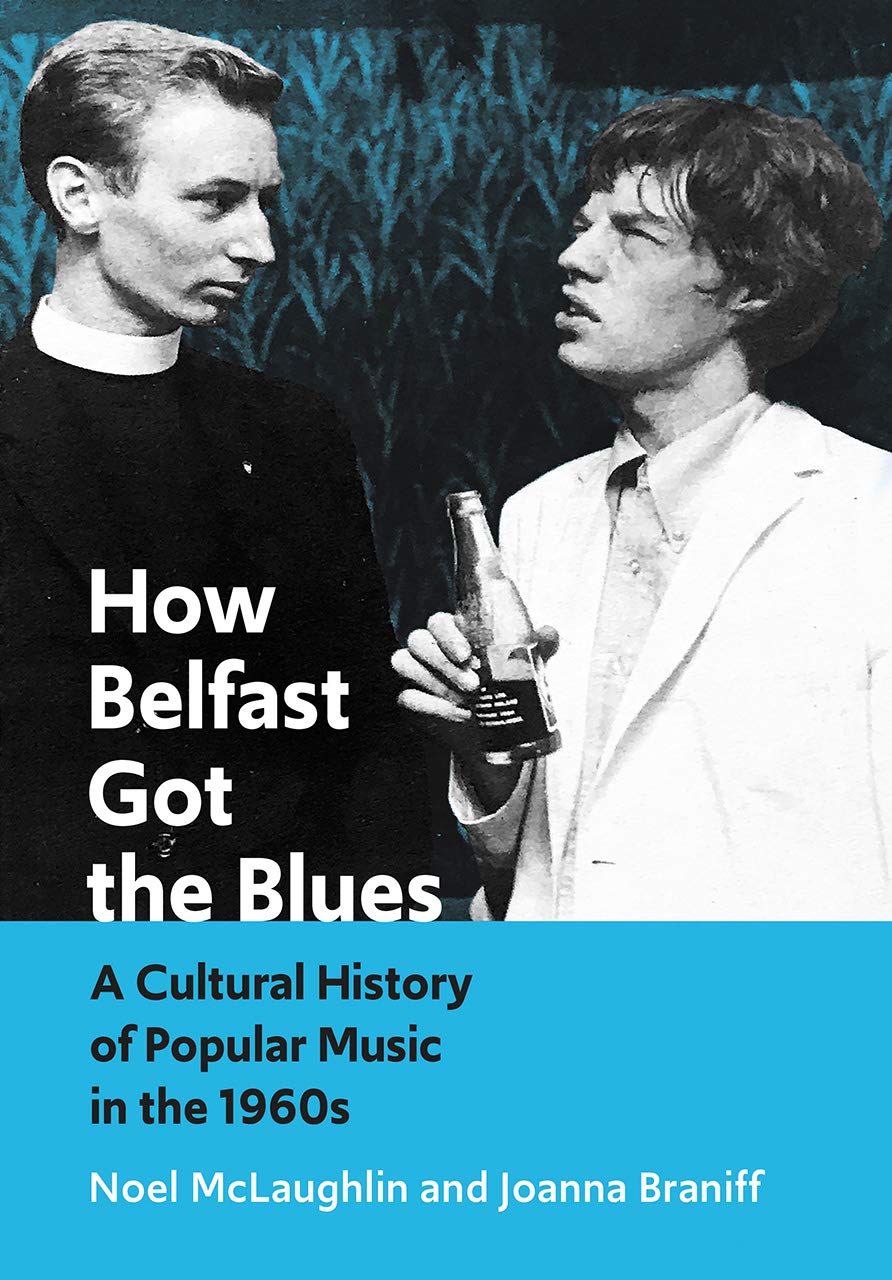 Over the past few decades, scholarship on music and place is well-established, from studies on music and national identity more broadly (Bohlman 2004; Radano 2003) to research on musical pathways within major cities as well as smaller towns (Finnegan 1989; Shank 2012). While publications on the music of Anglophone countries have received disproportionally high representation to date, recent years have witnessed a shift towards the peripheries in popular music studies. The result is more invigorating, illuminating subject matter, as well as innovative methodological and theoretical approaches, as scholars look towards the periphery in search for new insights, mindful and sensitive to spaces of difference (see, for e.g., Balance 2016; Hall et al 2019).

Uncovering the hidden histories of popular music in Northern Ireland’s capital city forms the heart of Noel McLaughlin and Joanna Braniff’s recent book How Belfast Got the Blues: A Cultural History of Popular Music in the 1960s. A book on this topic, taking into account Belfast’s peripheral geographical location –in the far north of Ireland, physically separate from the UK, at the edge of Europe– and the politically complex statelet identity fraught with memory wars, seems to have awaited authors with the expertise that McLaughlin and Braniff possess. The co-authors McLaughlin (a popular music historian, well-known for his scholarship on Irish popular music) and Braniff (with background in Northern Irish politics and journalism) present a unified collaboration that provides a deep dive into Belfast’s sociopolitical and cultural history. An important and much welcome book to the fields of Irish studies, popular music studies, and beyond, this substantial work explores the largely overlooked role of the city Belfast within local and global histories of popular music.

As a whole the book traces an arc across Belfast’s popular music and politics of the long sixties, offering a direct challenge to the “assumption that the periphery has nothing to tell the centre” (15). The book’s eight sizeable chapters plus an introduction focus on key events in the years 1964 –a pivotal year for popular music, both in Belfast and internationally (Chapter 1), 1966 –the summer of love that Northern Ireland’s politics rejected (Chapter 7), and 1967-1968 –mapping the musical and political landscape at Ulster’s crossroads (Chapter 8). Other chapters, that could likewise almost serve as standalone books in and of themselves, provide comprehensive accounts of significant artists from the region such as Them and Van Morrison (Chapter 4 and 5) and the Northern-Irish blues singer Ottilie Patterson (Chapter 6). While Chapter 4 opens boldly –and some may say erroneously– claiming that Van Morrison is “[Belfast and] Ireland’s most revered and enduring popular music artist” (172), there is no denying Morrison has certainly been the subject of some detailed biographies (as well as countless news articles and high-profile court cases, more recently). The two chapters that follow explore the early days of the band Them, alongside a parallel narrative of Belfast’s lively music scene with visits from touring acts like the Rolling Stones, and Them’s play (or plagarisation) on the Beatles adverts for their 1964 residency at the Maritime Hotel. Recurring characters in this book include the Solomon family, especially Philip Solomon, the Belfast-born concert promoter, record producer and band manager who managed Them along with other Irish and Northern Irish artists including The Bachelors, Phil Coulter, and The Dubliners. The importance of individuals like Solomon in shaping (Northern) Ireland’s music industry is interwoven across more than half of the book’s eight chapters, as the authors vividly detail the vital role of music management in supporting music scenes, fashioning popular taste, and manufacturing musical stars.

Chapter 2 takes a different approach than the other chapters, connecting Belfast’s peripheral status to popular music’s centre by investigating the mysterious surroundings of The Rolling Stones’ seldom seen film Charlie is My Darling (1966). Based on two days in the life of the Stones during their tour of Ireland in ’65, this novel account reassesses the Stones’ legacy and offers new insights into the band drawn from their debut film’s near disappearance. In another approach again, Chapter 3 uses Belfast’s legendary music venue of the Maritime Hotel –the so-called birthplace of rhythm ’n’ blues in Belfast– as a starting point to delve into issues of how popular music histories are curated and gradually become formalized, and how, why and which heritage initiatives become state-sanctioned. In an era when music tourism has become a lucrative industry in many regions, cities are regularly competing with each other for access to economic regeneration funds, and the opportunity for commercially-driven music heritage initiatives have reached an all-time high, such discussions are indeed timely.

A recurring theme throughout the book is that of those absent from history may well be as significant as those present, as the authors point to many of the gaps in Irish popular music research and recognition to date. McLaughlin and Braniff are to be credited for foregrounding some of (Northern) Ireland’s forgotten figures of popular music, in particular the representation of women. Ottilie Patterson is one such figure, who has gone down in history for her work with the Chris Barber Jazz Band and for performing with Sister Rosetta Tharpe and Muddy Waters, among others; yet her work has rarely received critical attention in its own right. Chapter 6, “Irish Lady Sings the Blues”, attempts to right this wrong, where McLaughlin and Braniff deliver a fresh narrative of Patterson’s career. They document an earlier, vibrant blues scene in Northern Ireland stemming from the 1950s, and in doing so, challenge prevailing historiographies that consider British blues to have developed from a youth- and male-dominated R’n’B subculture in the early 1960s. The authors discuss many of Patterson’s performances and recordings on both sides of the Atlantic, along with her composition and songwriting-style, and her unique musicality that blends her interpretation of the blues with an ostensibly Irish “yarragh” –that non-lexical intensity of feeling that is so often heard in Irish traditional song. Remarkably, the authors never deflect from the knotty issues of Patterson’s identity as a white woman inhabiting a musical form that stemmed from African American suffering. Instead, extensive nuance and consideration is given to Patterson’s oeuvre as it intersects with ideas of race, whiteness and the blues. McLaughlin and Braniff go on to reveal how Patterson’s career of singing the blues led to her actively working on anti-racist initiatives, including her foundational role in establishing the Stars Campaign for Interracial Friendship (SCIF) organisation, one of the precursors to the Rock Against Racism (RAR) movement. Suffice to say that the authors could easily have devoted the entire book to the immensely overlooked figure of Patterson alone; one can hope that after reading this chapter a future scholar may be inspired to take on the mantle.

The book’s final chapter, while it covers the initial release of Van Morrison’s now cult classic Astral Weeks in late 1968, it takes another more interesting look at a conspicuous absence from the popular music history books in the form of the utopian ‘Pop for Peace’ concert. This music gathering took place on the south of Belfast in August 1968 was the first outdoor peace concert held in Northern Ireland, included messages of support from John Lennon and Yoko Ono, attracted 10,000 people and preceded Woodstock –the most mythologized music festival of the decade– by two weeks, yet it is virtually non-existent in accounts of Northern Ireland in the 1960s. Again the discussion of memory wars and the question of “whose 1960s, whose NI and ultimately whose agenda” (433) is being advanced in Northern Ireland’s cultural memory is brought to the surface.

How Belfast Got the Blues provides a meticulous account of Belfast’s popular music culture and politics of the 1960s, going beyond the big names and greatest hits of the decade and, crucially, includes some of those disregarded in previous historical accounts. Released in what can be considered a bumper year for (Northern) Irish popular music scholarship with Stephen Millar’s Sounding Dissent: Rebel Songs, Resistance, and Irish Republicanism (University of Michigan Press) and Áine Mangaoang, John O’Flynn and Lonán Ó Briain’s Made in Ireland: Studies in Popular Music (Routledge), How Belfast Got the Blues marks an incredibly valuable contributions to both Irish studies and popular music studies that both celebrates and critiques the multifaceted role of Belfast’s music scenes and its international impact. At nearly 500 pages of sophisticated analysis, the book is reasonably priced in paperbook and e-book formats, offering historical nuggets and exceptional value per page.

At the very heart of the book lies the belief that popular music is put to the service of representation of Northern Ireland’s ambitions as well as revealing the statelet’s veiled repressions through lucid and illuminating evidence of the critical role popular music played in shaping Northern Irish identity. Far from Belfast being just a “troubled city” or an “obscure periphery”, by the book’s end the reader is left in full agreement with McLaughlin and Braniff’s convincing analysis that Belfast had the capacity to be “ahead of the curve” (446) not only in relation to pop music but also in progressive political thinking, such as the compelling discussion of politician-activist Bernadette Devlin-McAliskey.

By tuning into the various voices from the periphery, How Belfast Got the Blues showcases how pop groups, overlooked artists and little-known entertainers had a profound effect on official political culture not only in Northern Ireland and the Republic of Ireland but in Britain and the US too. McLaughlin and Braniff’s book offers a simple yet nonetheless significant message for the future of Irish (popular music) studies: that as scholars, educators and activists, we have a responsibility to shine a light on the musicians and actors who played an essential part in shaping our local music scenes in order to reveal what is remembered and what is excluded, as absences may be even more critically significant than presences.