by Timothy White. This text may be archived and redistributed both in electronic form and in hard copy, provided that the author and journal are properly cited and no fee is charged for access. 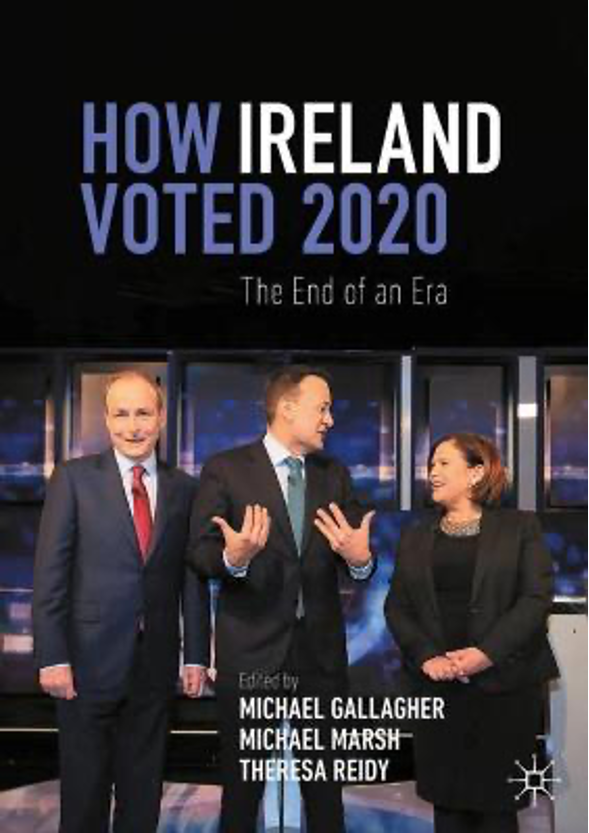 How Ireland Voted 2020 garners stellar contributions from the best scholars of Irish electoral politics. In addition to the analysis of leading Irish academics, this edited volume offers a glossary, list of abbreviations, chronology, and set of colour photos to begin the book. This background information is most helpful to those less familiar with the parties and personalities associated with contemporary Irish politics. The appendices provide election results by constituency and some demographic information of those elected. Chapter 7 allows five successful, mostly young, candidates for the Dáil and one for the Seanad the opportunity to recount their campaign based on their personal experience. These first-hand accounts, and more importantly, the scholarly analysis explain the continuing flux of Irish partisan and electoral politics as the old Irish party system is gone and a new stable political dynamic has yet to materialise. As John Coakley stresses in the concluding chapter, the 2020 Irish election highlighted electoral volatility and party system fragmentation.

In the first chapter, Gary Murphy provides a useful overview of both the history of Irish party competition and the events that led to the collapse of the Fine Gael-led government that had come into power in 2016. This government was based on a confidence and supply agreement with Fine Gael’s long-standing opposition, Fianna Fáil. A series of parliamentary losses in late 2019 precipitated Taoiseach Leo Varadkar to ask the President, Michael D. Higgins, to dissolve the 32nd Dáil and called for an election of February 8th of 2020. Varadkar had hoped to hold the election in the summer of 2020, but the political arrangement that allowed Varadkar to hold on to power was collapsing. He recognised that his party, Fine Gael, had not done well in by-elections in 2019 and hoped that his party support would strengthen before he called an election. His reading of the Irish electorate proved at least partially correct, as the election would remove his party from holding the most seats in the Dáil and would mean he would have to agree to be a lesser party in a Fianna Fáil majority coalition government. This was the first time in Irish history that these two parties, which had been the principal rival parties in Irish politics for generations, agreed to share power. Along with the decline in their overall support, Michael Gallagher contends that this signals the end of the era of partisan stability in Irish politics.

Perhaps more surprising that the arrival of a Fianna Fáil-Fine Gael coalition government in 2020 was the electoral success of Sinn Féin. It surpassed Fine Gael as the second largest party in terms of seats in the 33rd Dáil and had candidates frequently win on large first count surpluses throughout the country. Gallagher found that the average Sinn Féin candidate garnered more than twice as many first preference votes than either Fianna Fáil or Fine Gael. The electoral strength of Sinn Féin was highlighted by winning on early counts rather than requiring transfers, as had frequently been the case in the past. The party’s success in the 2020 election was built from lesser but important success in the 2016 election. As Gary Murphy highlights, Sinn Féin’s success was built on the collapse of Fianna Fáil in the 2011 election, the demise of the Labour Party in 2016, and the unpopular policy positions of the Fine Gael government on health care and housing. Instead of focusing on its historic call for Irish unity, Sinn Féin gained political traction coming into 2020 based on its call for greater government action on these social issues that were now at the forefront of Irish voters’ concerns. Thus, despite a good record of economic and job growth, the Fine Gael-led government lost seats and power in the 2020 general election.

One of the potential reasons for Fine Gael’s electoral decline in 2020 was that it did not fulfill its campaign pledges while in power from 2016 to early 2020. In their chapter, Rory Costello, Alice Sheridan, and Duncan Casey find that many of the most important items in the campaign manifesto of Fine Gael were implemented. Some of the campaign pledges were undermined by the necessity to gain support or at least the acquiescence of Fianna Fáil and some Independent TDs. However, some promises made in the campaign were not included in the program for government suggesting that the party was not intent on fulfilling those campaign pledges.

Kevin Cunningham and Michael Marsh account for the decline of Fine Gael and Fianna Fáil and the traditional party system to the changing socio-economic conditions in Ireland. Increasing levels of education, growing secularisation, and increased home ownership have created a much more sophisticated and demanding electorate who they claim is increasingly organised around traditional left-right ideological considerations. Parties that were vaguely center-left or center-right of the past (Fianna Fáil and Fine Gael, respectively) are increasingly giving way to a party that more clearly articulates a leftist agenda (Sinn Féin). Lisa Keenan and Gail McElroy found remarkable continuity in the left-right distribution of Irish parties over the last six elections. Thus, Irish voters have a clear understanding of the ideological differences between the parties. In the 2020 general election, Sinn Féin did better with working class, younger, and less religious voters. They also did much better with voters who expressed a populist orientation, a weaker trend in Ireland but still apparent in 2020 compared to previous elections. Cunningham and Marsh also find that Irish voters were less candidate centred in making their choices in 2020 and were more party focused. This allowed many new and less experienced Sinn Féin candidates to be surprisingly successful.

Teresa Reidy’s exploration in the candidate selection process for 2020 is illuminating on what Michael Gallagher has previously identified as the secret garden of Irish politics. While much of Irish campaigning and electioneering is transparent, the process of determining who will be the party candidates in each constituency differs by party and over time by election mandates like gender quotas that went into effect in 2016. While the parties all made the 30% threshold of female candidates for the 2020 election, the Irish election law mandates that beginning in 2023, parties will need to achieve 40% female candidates or lose half of their public funding. This represents a challenge for Fine Gael, Sinn Féin, and Fianna Fáil in future elections.

Party leaders and members who select candidates are primarily interested in candidates who can win, maximise votes for the party, and assist other party candidates. Ireland’s multi-member constituencies and single-transferable vote election system provides a level of strategy not common in single-member district or list proportional representation election systems. Each party calculated who to select based on the goal of maximising the total number of seats won for the party. While some parties increased the number of candidates they ran across the constituencies, Sinn Féin chose to reduce their number of candidates from fifty in 2016 to forty-two in 2020. This resulted in too few candidates in some constituencies where surprising surpluses from often new candidates could have supported another seat won for Sinn Féin. The major parties were able to draw incumbent TDs as the majority of their candidates for the 2020 election. Given the history of incumbent success in Irish elections, this is not surprising as were the large number of Senators and Councillors who formed the majority of non-TD candidates for the election.

One of the themes of this edited volume is that the old politics of either Fianna Fáil or Fine Gael winning and leading Irish governments is gone. Fianna Fáil’s demise was the result of the blame that Irish voters placed on this party for its handling of the economic crisis of 2008, a sentiment that determined the results of the 2011 election. While Fine Gael supplanted Fianna Fáil as the single largest party in 2011 and 2016, it did not lead to a new party system. Pat Leahy stresses how the 2020 election continued to bring change to the Irish political system by the emergence of Sinn Féin as a seeming near or co-equal with the traditional large parties.

One of the surprising non-issues of the 2020 campaign was Brexit. The United Kingdom’s vote to leave the European Union (EU) had come after the formation of the previous (2016) Irish general election. The Fine Gael-led government had received praise and support from Fianna Fáil and most of the Irish public for its response to that particular crisis. However, the party was not rewarded for its handling of Brexit and the UK’s withdrawal from the EU. This was important as part of the Dublin government’s longstanding support of the Northern Ireland peace process. Mary Murphy’s analysis based on exit polls emphasises that this issue was not of major concern to voter choice in the Irish general election of 2020. Ironically, this issue may have benefitted Sinn Féin as voters became more open and aware of a possible future vote on Irish unity, an issue of perennial interest to Sinn Féin leaders and their political base.

Kirsty Park and Jane Suiter explore the success of Sinn Féin in the election through their analysis of media coverage, including social media. They find that media coverage of Sinn Féin rose dramatically in the last week of the campaign as it became apparent that this party and its candidates were surging in the polls. Media coverage thus came to frame this election momentum that provided Sinn Féin its greatest electoral success in recent Irish history. Social media searches dramatically escalated regarding Sinn Féin in the latter days of the campaign. Park and Suiter found that the media did not give the same attention to health and housing as voters expressed in exit polls. The media inevitably focused on the horserace aspect of politics, but the major Irish media outlets failed to concentrate their coverage on the two issues that were by far the most important to Irish voters.

While the rise of Sinn Féin as an equal competitor to the two traditional large parties is the story of the 2020 general election, some traditional Irish electoral patterns remain. For example, Gallagher found several examples where votes were not transferred based on partisan loyalty but to candidates based on geographic loyalty. This was especially true in large rural constituencies. In their chapter, Adrain Kavanagh, William Durkan, and Caoilfhionn D’Arcy analyse the parties’ use of geography in candidate selection and vote management strategies. The maps they devise highlight the purposive effort to maximise vote for multiple candidates of the same party in a constituency. Similarly, Claire McGing’s chapter on the Seanad election and the appointment of Senators highlights the continuing influence of the two historic largest parties and geographic considerations. These practices continue to define the localism associated with Irish partisan politics. Despite these continuities, the partisan realignment of Irish politics continues. Future elections in 2023 and beyond will require the parties to nominate and run more female candidates. None have been particularly effective in running women candidates for councillor elections as a means of developing the political experience and name recognition that might allow future women candidates to be successful. Despite important changes, especially in partisan support, traditional patterns of Irish electoral politics remained evident in 2020.