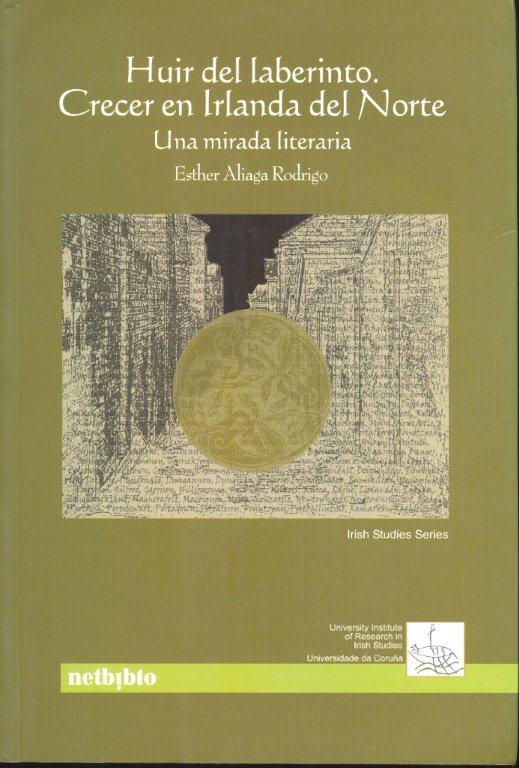 The idea that governs this book is suggestive and it is bound to provoke the interest of the reader. There are undoubtedly many accounts of The Troubles, historical, sociological, biographical, etc. but the present study supports the belief that literature may offer a serene vision that not only reflects the protagonists’ point of view and that of their circle of family and friends, but also presents a questioning impulse that looks for causes and delves into the origins of things. Esther Aliaga-Rodrigo has successfully completed this task with Huir del laberinto. She fulfils the objective of reading the period through its literature, casting a literary glance at a landscape of intransigence and sectarianism.

The project is not as easy as it seems. Novels cannot be reduced to a mere slogan and political positions in literature are entangled in a mess of emotions and contradictory feelings. “Novels at their best are complex things with lives of their own” novelist Ian McEwan once said. “They tend to make political points that are so broad you’d have to call them moral points, if they make those at all.” Esther Aliaga overcomes the problem of indefiniteness by carefully choosing the novels under study.

Firstly, the four narratives chosen to investigate the conflict in Northern Ireland in recent years share the same characteristics, which contributes towards a unified perspective: All of them were published in the mid and late eighties, when the conflict had reached a stalemate and civil society was as divided as ever. The creation of a climate of confidence which might enkindle the hopes for a better future was still far in the horizon.

Secondly, the four novels dealt with in the book are clear examples of bildungsroman. The experience of a youth growing up in a warlike environment may produce an astonishing fresh account of a tediously long and cruel conflict. Thirdly, Esther Aliaga has democratically selected novels that represent the experience of each side of the struggle: in one of the books the protagonist is a Catholic girl, in another the main character is a Catholic boy, and in the other two novels Protestant boy and Protestant girl occupy the centre stage. Finally, each author belongs to the environment they describe, thus enhancing the authenticity of the testimony. There is no place for a Weekend Troubles writer with a superficial love story among the ruins.

The novels in question are No Mate for the Magpie (1985), by Frances Molloy; Burning your Own (1988), by Glenn Patterson;Sunday Afternoons (1988), by Julie Mitchell and Ripley Bogle(1989), by Robert McLiam Wilson. Surely other narratives could have been added to the list. Cal (1983) by Bernard Mac Laverty immediately comes to mind, but Esther Aliaga takes pains to insist that this is not a revision of the literature of The Troubles, but the study of four representative cases. As historic events (the Peace Process, weapons decommissioning, devolution of power to the Northern Ireland Assembly) have lessened the pressure on a chastised population, perhaps it is the right time to understand the causes and the consequences of the tension lived for so many years. Like most books deriving from a PhD dissertation, Aliaga’s study proceeds in a systematic and precise way, preparing the ground for the close analysis of the novels, which are given a chapter each at the end of the book. Unlike many books deriving from a PhD dissertation, Aliaga’s study unfurls effortlessly in a clear and engaging voice.

Few aspects in relation to the novels’ connection to their environment are left unattended: all the young protagonists are exposed from an early age to the phenomenon of violence, although they react differently, either repeating acquired habits of behaviour or escaping the restrictive and provincial realms of their childhood. Throughout her exploration of the bildungsromanin Irish literature, Aliaga reaches arresting conclusions: while in the classic form of the genre the individual gradually understands the rules of adult society and finally integrates himself/herself into their company, in the Northern Irish manifestations of the form, the individuals struggle to put a distance between them and their claustrophobic surroundings, this attitude normally leading to a better knowledge of themselves. As Esther Aliaga states: “En la literatura irlandesa el Bildungsroman está impregnado de una fuerte presencia de la historia y de las circunstancias políticas y sociales” (23). In the literature of Northern Ireland the idea of integration is clearly subverted. Politics in these four novels act as a major force in the lives of the protagonists, not as an abstract universe of ideas but in the shape of everyday events that determine their existence.

The second chapter, devoted to the revision of Troubles literature is comprehensive and incisive in its analysis of a neglected tradition. Up to the nineteen eighties the novels that paid attention to the conflict in Northern Ireland gave superficial accounts to a vast audience. The urban warfare was normally a mere background for the action, there was no interaction with the historical origins and the narratives were ridden with clichés, the Irish usually presented as naturally violent. No mention was made of loyalist paramilitaries as there were only officially two sides in the conflict, the IRA terrorists and the British Army. Against this simplistic vision of the struggle, a number of young writers (including Colin Bateman, Mary Costello, Brenda Murphy and the authors of the four novels studied in Huir del laberinto) changed the lens through which the scene was normally seen: they portrayed life in Northern Ireland in all its complexity and offered universal approaches to a local theme considering, for instance, how violence at the time was not an exclusive feature of this tiny part of the world (the Vietnam War, students’ protests in France, etc.). They turned their attention to the beginning of the modern Troubles, the nineteen sixties, as a way of distancing themselves from their harsh present-day realities and also in understanding the causes that provoked an endless flow of deaths for both communities. What is at issue for Esther Aliaga is not so much the different presentation of violence by this new group of writers, but rather the commitment to their society without being sectarian, without using a Manichaean dualism and without portraying an essentialist version of the Irish.

The third chapter is devoted to the sense of place in Northern Irish literature, reinforcing the connection between a personal sense of identity and loyalty to a particular territory. The reason for being a predominant symbol in the literature of the North was clearly summed up by Inés Praga in her chapter “La novela del norte” (from the book La novela irlandesa del siglo XX, 2005): “Realmente lo que confiere una fuerza tan extraordinaria al sentido del lugar, (…) es precisamente la facilidad con que este sentido se siente amenazado e incluso amputado por la fuerza” (224). Although Esther Aliaga does not mention Ines Praga’s influential text, she maintains this line of thought, going back to the colonial experience to explain that for both communities, Catholic and Protestant, this is the land of their ancestors, concluding that in Northern Ireland even the dead exert pressure on the living.

Belfast, which is present in the four novels, emerges as the menacing icon of a damaged land, always represented in dark colours, doomed for tragedy, holding its inhabitants in its grip. Geography, as Aliaga explains, leaves little space for personal growth; once born in a particular district of the city, one’s life is determined for ever in a particular direction. It is an external imposition and those who resist suffer alienation from their communities. In her almost forensic study of the Troubles before analysing each novel, Aliaga also pays attention to the familial relationships that bear the brunt of the conflict. The father being an absent figure or a weak model to follow, mothers in both communities take the role of heads of the family, becoming surrogate fathers themselves. At the same time, curiously enough, they are forced to follow a compulsory passive role outside the domestic realm.

Another important factor, essential in understanding the novels under scrutiny, is the guilt felt by parents for bequeathing to their children a legacy of hatred and fear. For their part, Aliaga explains, children in Northern Irish novels do not normally rebel against their parents as part of their growing to maturity, there being other barriers to tear down which become instead the target of their anguish (the state, the army, the IRA, the paramilitaries…). Perhaps in an attempt to be normal the young protagonists of the selected novels in Huir del laberinto do confront their parents, as a way of asserting their “normality”. The fifth chapter deals with the socio-political conditions that explain the conflict, and it offers a particularly acute profile of the Protestant community in Northern Ireland, this being the social group that has normally had fewer resources to define their identity in positive terms.

The present book is another example of an accomplished and serious work of criticism in a solidly edited collection whose supervisor is Prof. Antonio Raúl de Toro Santos, director of the University Institute of Research in Irish Studies Amergin, University of Coruña.