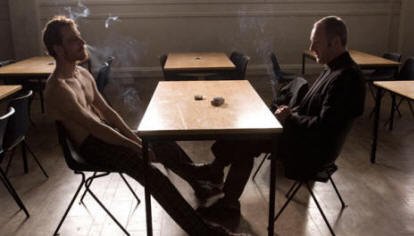 In late December 2008 the British government released a new round of state papers under the 30-year rule. Among the files uncensored was a document  from the office of the then British Prime Minister, James Callaghan, which revealed that the IRA had sent a message to the British government in 1978  indicating that it was willing to enter talks concerned with ending its violent campaign in the North. The offer was rejected outright by the British government with the then permanent under-secretary at the Northern Ireland Office, Sir Brian Cubbon, remarking that it was “essential that we should not say or do anything in reply that gives any hint that we have considered their message or are taking it seriously.”1 Whether this offer might have provided a realistic opportunity to begin a peace process that would take until the early 1990s to begin, and cost many thousands of lives in the interim, we will never know. However, watching Steve McQueen’s Hunger, one is struck by two prominent features of the film — both an absence of dialogue, and a real concern to facilitate it when the opportunity arises.

More than a few eyebrows were raised when it was announced in May 2007 that the London born director of Grenadan descent’s debut feature film would concern the IRA hunger striker Bobby Sands.  The Turner Prize winning artist seemed an unlikely candidate to tackle one of the darkest and most traumatic moments in recent Irish history when ten men voluntarily starved themselves to death to be classed as political rather than criminal prisoners. It was a crucial moment in Irish history, and particularly for the North of this Island that would begin a move to political, rather than military means, by the Republican movement represented in McQueen’s film in the election of Sands himself shortly before his death. Yet the human willingness to choose death in extraordinary circumstances had been apparent in previous work by McQueen, in particular his 2002 cinematic installationCarib’s Leap, a work named after a cliff in Grenada where, in 1651, more than 40 indigenous Caribs chose to jump to their deaths to avoid surrender, and enslavement, to their French colonisers. The resonance of the hunger strike with this act could not have been lost on McQueen.

The hunger strike has appeared in several films over the past twelve years, marking partly the developing peace process and the increasing willingness of filmmakers to engage with a topic long thought too controversial to contemplate. Terry George’s Some Mother’s Son (1996) offered a largely sanitised account that adopted the perspective of the non-aligned and sympathetic figure of the mother of one of the strikers to explore the traumatic events. However, the non-engagement and distance of Kathleen Quigley (Helen Mirren) from both the culture and events themselves, reflected in one extraordinary moment when she expresses absolute ignorance of the expression ‘Tiocfaidh ár Lá’  —  and this from a schoolteacher in a nationalist school(!)  —, made for a film of limited insight or resonance. Both Les Blair’s H3 (2001) and Maeve Murphy’s account of female prisoners’ protest inSilent Grace (2001) provided significant representations, though both ultimately adopted a largely conventional approach to the events. McQueen, however, approaching the topic from both outside the culture of Ireland and conventional film, offers, in terms of representations of the North, a distinctly novel approach. Gone are the generic imperatives that have dominated representations of the North, which have frequently attempted to apply familiar tropes of the thriller or drama genres against a Northern Irish context. Instead for McQueen it is firstly the visual and secondly the interactive possibilities of cinema that are exploited, apparent in the manner through which the film features striking visual compositions without the necessity to explain or explicate and also allows a space for the audience to engage and contemplate at recurring moments.

This is not to say that the film does not contain familiar moments reminiscent of more generic approaches to the conflict in the North. The opening evocative scene of protestors banging bin lids recalls such moments in a previous film such as Jim Sheridan’s In the Name of the Father (1993) but it is made all the more arresting by the clattering noise preceding the revelation of its source. This unsettling and disturbing opening sets the tone, and cues the audience, for the film as a whole that includes some of the most harrowing and visceral representations of the Troubles.

This viscerality is repeatedly invoked throughout the film, whether in the violence perpetrated or the detail given of the living conditions during the dirty protest. The subsequent shots of a prison officer, Ray Lohan (Stuart Graham), washing blood from his bruised hands anticipates the violent and brutal beatings by prison officers and riot police of Republican prisoners in succeeding scenes. McQueen, however, delays the violence itself until almost a third of the way into the film, suggesting it instead in shots of blood and wounds, making the moments of its appearance, including humiliating cavity searches, all the more affecting. Yet he does not diminish or deny the violence of Republicans themselves, apparent in one particularly disturbing sequence when we witness the cold-blooded killing of Lohan, presumably by the IRA, while visiting his senile mother.

Aesthetically, these moments are characterized by both their visual richness and complexity and the absence of dialogue. One is struck, for instance, by the evocative use of the colour blue, redolent of (among many things) both coldness and misery, throughout the opening third, apparent in one early suggestive scene when Lohan takes a cigarette break in the prison yard while the snow falls.  McQueen is also not afraid to dwell at length on events and their aftermath  —  this is particularly evident in the long take, directly after the encounter between Bobby Sands (Michael Fassbender) and Father Moran (Liam Cunningham), of a prison officer mopping the corridor between the cells.  It is a film that is rarely rushed in its recounting of events and includes moments of rare beauty, amongst the horror and filth of violence and the dirty protest in all its nauseating detail. This includes a sequence where the young Republican prisoner Davey Gillen (Brian Milligan) contemplates a fly on his hand while pushing his arm through the bars of his cell window, savouring the feel of the world beyond, and a striking circular work created by a prisoner on the wall of his cell from his own faeces.

While allowing audiences to contemplate and consider the scenes they have just witnessed, there is a further imperative in these moments and indeed the lack of dialogue of the first third. In the space where dialogue might exist, violence predominates and understanding seems far off. Even where dialogue does occasionally take place, it is often marked by misunderstanding, as when Gillen first enters his cell and is addressed by his cell mate in Irish, a language he shows complete ignorance of, a fact underlined at several points in the film.

Yet when dialogue does enter the film at length, it is facilitated in a manner rarely seen in contemporary film. This is an almost 17 minute unedited two-shot sequence, written by Enda Walsh, from one static camera angle of Sands and the priest Father Moran, discussing the decision to go on hunger strike. It is a sequence that required the employment of specially altered film stock (with 35mm film reels lasting normally only ten minutes) a symbolic point in terms of the new ways of thinking about identity and conflict in the North that was required to bring an end to the conflict. Such was the demands placed on the actors to do the scene, Liam Cunningham moved into Michael Fassbender’s Belfast flat to rehearse for five days from early morning to seven in the evening, “running the scene” Fassbender has recalled, “15 or 20 times a day for five days.”2) In the end they managed to nail it on the fourth take.

The dialogue itself  —  which follows the most violent and unsettling moment in the film, Lohan’s killing  —   is marked by an interrogation of the reasons for the strike but it also critiques, in the comments of Father Moran, the prisoners refusal to further negotiate, their potential vanity and elevation as martyrs of the strikers themselves. For Moran, Sands’ personal crusade neglects his own immediate family’s needs, including his young son, while also leading many others to their deaths on a hunger strike with little certainty, given Thatcher’s intransigence, of any positive outcome. Furthermore, Sands own refusal to negotiate required an unlikely complete ‘surrender’, as Moran describes it, by the British, rather than a negotiated settlement. For Sands, the strike is largely motivated by a frustration with negotiations that revealed the bad-faith of the British government, evident in the film in the ‘civilian-type’ clothing (rather than their own clothing) allowed to prisoners, used primarily as a means to further humiliate them.

Humiliation, and indeed, dehumanisation, is a recurring feature of the film, though it is clear that McQueen views this as the lot of both the perpetrators and victims of violence. This is signalled from early in the film when Davey Gillen is forced to strip before prison officers after refusing to wear the clothes ‘of a criminal’. In the silence and tension evident, one is struck by McQueen’s patience to allow the scene unfold with the obvious shame and discomfort of the prisoner as he is marched naked to his cell  —  and contrasting animosity of the prison guards  —  very apparent. Yet the prison guards too are reduced by their barbaric acts. The shots of Lohan at the beginning reveal a man uneasy with his own actions. The most striking moment in this respect is the depiction of one of the riot policemen brought in to break up a prison protest crying behind a wall as his colleagues brutally beat Republican prisoners. Yet it is the final third of the film that presents the greatest challenge to the viewer as we witness the gradual physical disintegration  —  and indeed at times humiliation  —  of Sands himself in considerable detail and explicitness. Michael Fassbender went on a supervised extreme diet to depict the scenes, losing over 50lb in the process, and his performance ranks as one of the most moving and convincing in cinema of the Troubles to date.

Through all of this, McQueen ultimately maintains his belief in the human spirit, in the transcendental possibilities of the human imagination that can move above and beyond the traumas of life. For Sands, these are marked by his childhood memories of his time as a cross-country runner, an account of which ends his dialogue with Father Moran and represents his final thoughts in the film. Despite the broken and devastated human body, there remains the hope in the ability of humans to move beyond the tarnished present and to imagine a better time, a time free from the suffering of the present. A time, maybe, when the hunger strike can be viewed, and reflected upon, in popular culture and film as a crucial historical moment but one that serves to remind us of how far this island has progressed over the past thirty years.