In the Name of Peace: John Hume in America (Maurice Fitzpatrick, 2018)

In the Name of Peace: John Hume in America (Maurice Fitzpatrick, 2018) 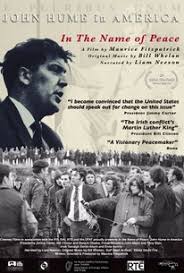 The twentieth anniversary of the Good Friday Agreement in 2018 provided a moment for reflection on the legacy of the Troubles and subsequent agreement on Irish society and political life. Unsurprisingly, this legacy featured prominently in a range of documentary works released in the past year. Comedian Patrick Kielty provided a moving and very personal perspective on the conflict (in which his father was murdered by paramilitary gunmen) and the significance of the Agreement in the BBC production, My Dad, the Peace Deal and Me (2018); Brian Hill and Niamh Kennedy’s The Life After (2018) also focused on the traumatic legacy of the violence for those who lost loved ones during the conflict; while Maurice Sweeney’s I, Delours provided a complex and intimate insight into the IRA and its activities through the testimony of former militant activist Dolours Price. Perhaps no single individual is more associated with the Good Friday Agreement than former SDLP leader John Hume, and Hume was the focus of one of the most widely circulated and acclaimed documentaries to appear, Maurice Fitzpatrick’s In the Name of Peace: John Hume in America.

Fitzpatrick was screenwriter of the 2009 documentary The Boys of St Columb’s (2009), which explored the lives of a range of former pupils of the small Derry school of the title, including Hume, and it was while undertaking that project that he first realised the extent of Hume’s connections with US politicians. John Hume in America is, however, Fitzpatrick’s first major documentary as a director (as well as being writer and producer of the work) and this is an impressive production on several levels. Most obviously, the film brings together an extraordinary array of contributors, including interviews with former American presidents (Jimmy Carter, Bill Clinton), British Prime Ministers (Tony Blair, John Major), Taoisigh (Enda Kenny, Bertie Ahern), and major political commentators from the US, Britain, and both sides of the political spectrum in Northern Ireland, including Gerry Adams, Seamus Mallon, David Trimble, and Jeffrey Donaldson. These commentators provide insight into Hume’s vast contribution but also indicate the challenges he faced across his career in charting a path towards peace in Northern Ireland. Interviews with these contributors are accompanied by fascinating archival material charting Hume’s life and the development of the Troubles; narration by actor Liam Neeson; and accomplished cinematography throughout (including stunning landscape drone photography) by DOP Basil Al-Rawi.

The documentary was released with a companion book John Hume in America: From Derry to DC (also written by Fitzpatrick) which provides a more detailed analysis of Hume’s journey as a politician, and engagement with the United States as part of his vision for resolving the conflict in Northern Ireland. However, unlike the more typical movement of film from text to screen, as Fitzpatrick indicates in his preface, it was the process of making the film that encouraged him to also produce a related book on the subject, and the book features considerable extracts from interviews featured within the documentary.

The documentary begins impressively with shots of the White House accompanied by the voice of former president Bill Clinton. This sequence sets the scene for the documentary as a whole, as Clinton emphasises Hume’s success in harnessing the diaspora to bring peace to Northern Ireland. Fitzpatrick traces Hume’s key ideas to a series of articles he wrote for the Irish Times in 1964 that set out his vision for resolving the Northern Irish conflict, and contends that this vision provided the central components to what eventually became the Good Friday Agreement. From the beginning, Hume realised that the United States could play a critical role in this process. The documentary charts how Hume brought the Troubles to the top of the political agenda in the United States through his interventions with leading Irish American figures. Key figures identified in this respect were former Speaker of the House Tip O’Neill, Senator Ted Kennedy, Senator Pat Moynihan and New York Governor Hugh Carey, collectively known as “the four horsemen” who lobbied to ensure the Northern Ireland conflict and its resolution would feature high on the political agenda of American Presidents and senior politicians. However, the documentary indicates that Hume not only convinced these influential figures to forward his agenda; he also realised the importance of the American media in bringing change to understandings of the Troubles and the potential role of the United States in its resolution.

While impressive in many respects, John Hume in America is limited in its critical analysis of Hume’s contribution or legacy, evident for example in the absence of academic contributors. There is an overall hagiographic tone apparent with a parallel suggested in the work between Hume and Ireland itself, affirmed through the use of impressive shots of Irish landscapes (lakes, castles, rivers, coastlines) intercut intermittently with interview material. In this respect the documentary is reminiscent of George Morrison Mise Éire (1959). As noted by Lance Pettitt of that work, Morrison «inserted some curious bridging sequences … which depict the sea crashing against a rocky coast. They stand out as unmotivated links in the actuality newsreel that they join. The eternal forces of nature are linked to the political narrative of nation in a rhetorically powerful romantic image» (82).

This description could well be applied to the rather sentimentalised landscape photography of Hume in America. The focus on America evident in the title is also arguably apparent in these sequences, reminiscent of touristic depictions of the Emerald isle. This is accentuated further by the traditional musical accompaniment (by Riverdance composer Bill Whelan) which again suggests familiar constructions of Ireland as rural, romantic and traditional. These sequences also contribute to the overall hagiographic tone of the work, while suggesting that the arrival of peace was a natural consequence of Hume’s work and vision; the reality, of course, was much more complex and multifaceted.

Indeed, it is this complexity that is absent here. While the range of voices featured is undoubtedly impressive, one is left with the overall feeling of having encountered a beautifully realised and visually impressive work, but one that lacks a more critical edge. While peace has broken out in Northern Ireland, and the province is undeniably in a better place today than prior to the Good Friday Agreement, much still remains to be resolved. Devolved government is not functioning and the fudge that the Good Friday Agreement (perhaps necessarily) was, is a major contributory factor to this. While Hume’s contribution should never be forgotten, it must also be acknowledged that his approach ultimately led to the decline of his own political party as a major force in Irish politics and the rise of Sinn Fein and DUP (the hard line political forces on either side of the political spectrum) to dominate politics in Northern Ireland. One of the very few critical comments in the documentary is made by Seamus Mallon, former deputy leader of the SDLP. Mallon describes Hume as going on ‘solo runs, he could not take criticism well, he preferred to be on his own’ – while Hume’s ideas may have provided a basis for peace, they did not provide a viable vision for what followed the peace process itself.