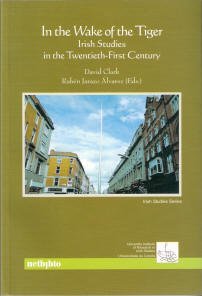 In the Wake of the Tiger. Irish Studies in the Twentieth-First Century.

The two volumes In the Wake of the Tiger. Irish Studies in the Twentieth-First Century and To Banish Ghost and Goblin. New Essays on Irish Culture are a new addition to the Amergin Irish Studies series and a good sample of its fertile productivity. Being complementary, they share a purpose clearly stated in their introductions: to present a collection of studies by scholars working from the perspective of the end of the first decade in the 21st century.

In the Wake of the Tiger makes its objectives clear from the very beginning: “to assess the current state of Irish writing, language, music, cinema etc., and what these cultural manifestations mean in the current political and economic climate. Needless to say they refer to the period in which the optimism of the years of the Celtic Tiger has turned into frustration and deception as the country faces the economic crisis which started around 2007. In summary, the two volumes attempt to diagnose the present illness of the country while looking at the difficult past beyond it and, if possible, to give some prescriptions to heal it. Nothing to do with the times in which the Celtic Tiger was at its peak.

In the Wake of the Tiger is divided into four areas: Trauma Studies, Ireland Abroad, Audiovisual Ireland and Irish Studies and The Tiger, each chapter accompanied by lyrics from songs by Damien Dempsey, an author very close to the times we are referring to.

In the first section —Trauma Studies — Constanza del Río Álvaro’s “Trauma Studies and the Contemporary Irish Novel” creates the proper atmosphere when she ratifies “the cultural and psychological need to revisit the historical past”, mainly in William Trevor and the big house novel and evoking “the need to bear witness to an uncertain event”, that is to say, to insanity, dysfunctional families, sexual abuse, incest, rape or vicious and sectarian contexts. Trevor and Lucy Gault are also dealt with by Raquel Paradela Macía in “Gothic Traces in Contemporary Irish Novel: The Case of The Story of Lucy Gault by William Trevor”, mainly tracing the history of the gothic tradition and its resources whereas María Jesús Lorenzo Modia’s “Invalids in War: Illness and the Irish Conflict In Medbh McGuckian” deals with the different levels of violence  in that  “catalyzer for illness” that is Medbh McGukian. Not at all less traumatic is the tradition and aims of the hunger strikes that F. Stuart Ross analyses in “Hunger Striking and the Irish: Myths and Realities” according to the author “a last ditch attempt in a desperate struggle”, and  a historical tool present in other conflict situations such as Palestinian revolts or the revolutionary European left and by no means an exclusively Irish practice.

Ireland abroad includes two studies about the international echoes of  Irish writers: first Carmen María Fernández Rodríguez traces the German translation of Castle Rackrent in 1802 and its reliability in “Edgeworth in Germany: Recovering Schloss Rackrent 1802”. A different lens — that of dictatorship — is applied to the analysis of Alberto Lázaro Lafuente in “Spanish Readings of Le Fanu’s “Carmilla” concerning the reception ofCarmilla in Franco’s Spain. The following essays, Alfred Markey’s  — “Beyond the Commuter Pale: Borderlands and Authenticity in the Recent Short Fiction of Claire Keegan and John MacKenna” and Eva Roa White’s “From Emigration to Immigration: Irishness in The Irish Short Stories of Sarah Orne Jewett and Roddy Doyle’s The Deportees” — draw new Irish profiles.

The three studies of Audiovisual Ireland cover the fields of music and film studies, two main axis of contemporary Ireland, the first well represented by the paper of Matteo Cullen — “Emerging Patterns: Irish Rock Music, 1968-78”— and his survey of  Irish rock music in the decade 1968-78, a landmark for further times and production. Rosa González Casademont’s excellent contribution, “The Glocalisation of Contemporary Irish Cinema” proposes a brilliant “portmanteaux term” to analyse the balance of the local and the global  in contemporary films and to measure the fruitful perspectives it opens for the “the Irish cinema to  be ‘accented’, without having to align itself with the aesthetics and market imperatives of Hollywood.” Shane Walshe’s “What about the Celtic Tiger Economy Boom Thing? Examining the Changing Face of Ireland in the Film When Brendan Met Trudy reveals the darker side of the Celtic Tiger Ireland, mainly when compared with other contemporary films.

The final section, Irish Studies and The Tiger, begins with a convincing diagnosis of multicultural Ireland in a joint study of Luz Mar González Arias, Marisol Morales Ladrón and Asier Altuna-García de Salazar in “The New Irish: Towards a Multicultural Literature in Ireland?”. An X-ray photography both of the new Irish literature and the new Irish in the lost Celtic Tiger period is provided, ranging from multicultural theory to the post-tiger novel in Roddy Doyle and the “ethnic minorities” of Ireland. A completely different scope is that of Ciaran Dawson in “Change of Ownership”, discussing the position and role of the Irish language and followed by another two insights: José Miguel Alonso Giráldez’ recommendation of O’Donoghue’s selected poem in “On Occasion of the Launch of “Selected Poems”: Revisiting Bernard O’Donoghue’s Early Poetry” and Margarita Estevez Saa’s “Antidotes to Celtic Tiger Ireland in Contemporary Irish Fiction: Anne Haverty’s The Free and Easy, and Éillís Ní Dhuibne’s Fox. Swallow, Scarecrow”, one of the best essays of the volume, where she brilliantly argues that these works represent the weak and fragile side of the otherwise glamorous daily life in Ireland.

As we suggested above, the book only partially fulfills the expectations it created. While the diagnosis of post Celtic Tiger is insightfully laid out in the pieces by  Constanza del Río Álvaro, Rosa González Casademont, Ciaran Dawson, Margarita Estevez Saá, Marisol Morales Ladrón, Asier Altuna-García de Salazar and Luz Mar González Arias other contributions are only tangentially related to the topic. 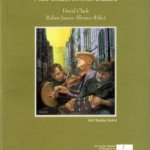 The sister volume — To Banish Ghost and Goblin. New Essays on Irish Culture — is introduced by the lyrics of the song “Rocky Road to Dublin”, perfectly illustrating that — as the authors clarify — despite the prosperity and celebrity of Ireland at that time — U2, Riverdance, cultural vitality, the great status of Irish studies —, the road to the construction of this new Ireland has been, however, a rocky one. Scholars pay attention to the rapid and often traumatic changes in the social fabric of Ireland in 6 six sections: Irish Literature, Gender Studies, Ireland Abroad, Northern Ireland, Audiovisual Reconstruction and New Approaches in Irish Studies.

The following section, Northern Ireland, was meant to complete the ongoing debate, (so intensely focused on the Republic that very often the North is absolutely forgotten), given the temporal coincidence of the Peace Process and the economic boom in the Republic. Therefore Esther Aliaga Rodrigo writes on the wall murals — “Painting History: Murals in Northern Ireland —, Stephanie Schwerter on the influence of Europe on Northern Irish poets — “Europeanizing Northern Irish Poetry”: From Paulin to Pushkin” — and the traveler community is analyzed by Andrea Redmon in “Cultural Representation of Nomadic Culture in Northern Ireland Legislation and Media.”

Audiovisual Reconstruction gathers another two essays centered on music and cinema. Carlos Seco González in “‘If you know your history’ Celtic FC and Irish Rebel Songs: Identity Formation and Politics” discusses the importance and legitimacy of Irish rebel songs in the history and current search for identity of the Celtic football club. Guillermo Iglesias Díaz, on his part, traces the building of a nation through the cinema of the last century in “A Century of Cinematographic Re-constructions of Ireland: Building a Nation”.

Finally in New Approaches to Irish Studies, Anne MacCarthy evokes James Stpehens’s figure and role in anthologies in “James Stephens and the Chronological Layout of Irish Anthologies, Asier Altuna-García de Salazar’s “Marsha Merhan and Multiculturalism in Irish Fiction” discusses the writer’s contribution  to the growth of new views and scopes  ‘in contemporary Irish fiction and Ute Anna Mittermaier’s “Charles Donnelly, ‘Dark Star’ of Irish Poetry and Reluctant Hero of the Irish Left” recovers for us the poet and activist in the Spanish Civil War.