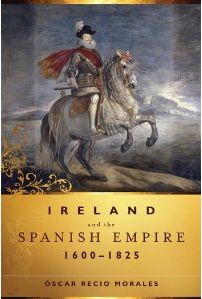 According to Ciaran Brady, the author of the preface of the book, one of the features of truly distinguished scholarship in not only that it offers new evidence and new perspectives but also that it raises a further set of challenges demanding further research and further thought. This is the case of Oscar Recio’s volume, a work based on a solid foundation of original research, that Brady defines as a “major contribution in the study of early modern history in the last decade.” He argues that scholarly interest used to remain steadily focused within the traditional framework of Anglo Irish relations and that horizons were somewhat narrow. Historians had discussed the effects which the extraordinary experience of the Spanish in the new world had on English attitudes toward Ireland in the 16th and 17th centuries, with an important influence in the process of aggression and exploitation which occurred in Ireland at that time. But despite that, their concern was to understand English attitudes rather than the European influences that may (or may not) have shaped them. In the 1970s and 80s Irish historiographical interest in the influence of Western Europe on Ireland remained a minority concern, sustained mainly by individual scholars,  military historians and above all historians of the religious orders. Brady emphasizes the efforts of James Hogan, Richard Hayes, Brendan Jennings between the 1920s and 1940s  or later John Silke and  Micheline Kerney — Walsh  in the 1960s and 70s and Gráinne Henry  to keep a European perspective. But only in the past dozen years were increased the feeling of Ireland’s significance within Europe and the opportunities, challenges and dangers which this new form of identity entailed. In addition, there was generous support for research within the humanities with European perspectives, and from such public funding a number of important initiatives concerning the history of  Ireland’s links with the continent took shape, Oscar Recio’s included. Needless to say all this implied internal changes within the world of historical scholarship itself, above all an increasing awareness of the inadequacy of the old framework of Anglo Irish relations, parallel with a similar dissatisfaction among continental scholars with the interpretative framework of dynastic struggles and nation-state formation which had for so long dominated research. Out of this there has arisen a greater awareness of the degree to which groups which transcended national and dynastic boundaries — merchants, members of religious orders, scholars, soldiers, sailors —, played a role in shaping the way in which the traditional dynasties and new states evolved and the way they related to one another. For the Irish of the early modern world, those who moved frequently between home and exile, occupied a cultural and ideological environment that was far more complex and uncertain than the comforting polarities of the Anglo Irish conflict. Now they represent our surest guides to a world long obscured and almost lost which we are only now recovering and Recio’s book marks a major step in this process of recovery precisely for his  audacious and ambitious undertaking .

The book is structured in five chapters with an impressive breadth of scope. Earlier research into the history of the Irish in Spain have tended to be focused on the individual, on the particular group, the celebrated occasion or the significant event. In Recio’s impressive breadth of coverage — from the beginning of the 17th century  to the beginning of the 19th —, every phase of the Irish experience in Habsburg and Bourbon Spain has been reviewed with fresh perspective. His two chapters on the 17th c — “Philip III of Spain and Ireland, 1602-1621: a non-conventional reign” and “Natural Allies? Irish expectations and Spanish exhaustion, 1621-1690” —, prove how different were the fortunes, the attitudes and the strategies for survival in the complex circumstances of Spain.  The  chapters on the late 18th and early 19th centuries — “Renewing Loyalty: the Irish Community in Eighteenth Century Spain, 1691-1754” and “the Irish Hour in Spain, 1754-1825” — reveal the great fortunes of those Irishmen who continue to operate as an identifiable group, even as they sought acceptance into theancient régime. And most tantalizing is Recios’s conclusion on the experience and remarkable success of the Irish émigré community in Spanish America and the role of the Irish in the revolutionary movements of Latin America, as discussed in the final chapter.

In his Introduction Oscar Recio provides some keys concerning the title of the book. According to him, a Spanish version of the book would not have this title but it would use the term  monarquía  because  in a strict sense there was no Spanish Empire  and there was no imperial school theory  nor  imperial history at all. “Imperio” and “imperial” were invalidated words under Franco’s regime, and from 1960 onwards only the English speaking world uses this terminology, the major contribution arriving from English speaking historians. But historians must bear in mind the global and international dimension of a multi kingdom monarchy and  the part played by other territories or  nations in the imperial venture is essential. Balance is difficult, since in the 19th century foreigners were either obscure or presented  as pernicious.

Recio also clarifies that it may appear disproportionate when compared with the historical links between Ireland and the British Empire. From the outset it is important to point out — he remarks — that Madrid’s interest in Ireland was not to incorporate the island into the immense conglomerate of kingdoms which we call today the Spanish monarchy. The Spanish empire was really established on a basis of inheritance rather than one of conquest. And there was no success for the attempts and offers being made by the Irish themselves to incorporate the kingdom of Ireland into their territories. Successive offers were treated with caution by Felipe II o ignored by Felipe III or Felipe IV, offers which coincided with crisis and were made also to the French. It is also worth mentioning that the date span chosen for the book (1600-1825) is not that normally associated with the zenith of Spanish power. Quite the opposite, these were the years of its long death agony.

Recio focuses on Ireland’s links to Spain beyond the strict framework of the Spanish composite monarchy and pays attention to other relationships of “informal influence” and “informal presence”. Old historiography stressed famous battles and illustrious individuals, many of them labelled with the romantic name of “wild geese”. He emphasizes their connotations of military, nationalist, victimist, antagonistic, masculine, heroic and noble but the term, when confronted with the complexity of Irish migration to the continent, is totally anachronistic and reductive.  As Recio proclaims, not all Irish migrants were soldiers, neither were they all men, nor did all obtain honours and integration. To consider conflict as a key word is a starting point proposed by Recio to rewrite the history of the Irish migration and to redefine the nature of the links between Ireland and the Spanish Empire. An ambitious undertaking in which Recio has definitely succeeded, providing us not only with a brilliant academic contribution but also with another way of looking back to our history and,  above all, to our relations with Ireland.