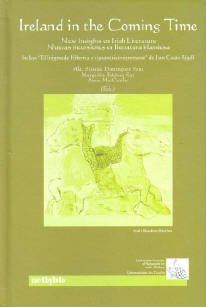 2006. Ireland in the Coming Time. New Insights on Irish Literature.

Writing in 1992, the late professor of English literature at the University of Alicante, Brian Hughes, whose articles are gathered in a volume reviewed below, stated that the field of Irish studies «has suffered in Spain from the scattered, isolated and episodic nature of the publication of critical material». Were he alive he would be positively surprised to see how things have changed for the better and this volume testifies that 15 years later Irish studies in Spain is an area of lively debate. Ireland in the Coming Time collects and expands a number of papers which were presented at the 16th meeting of the Spanish James Joyce Society. The present edition belies the idea that a book of proceedings should be dull. Of course it is both a strength and a weakness to put together such a heterogeneous collection but, just like in the previous volume, the editors have succeeded in presenting their work with style.

The book opens with a short story by Juan Casas Rigall, and it is followed by an article by Antonio Raúl de Toro Santos, director of the Amergin Research Institute of Irish Studies, the academic centre which sponsors these two volumes. His paper enters  the field of historical research, revealing new details on the literary links between Galicia and Ireland. Plácido Ramón Castro was an outstanding member of the generation of Galician intellectuals of the 1920s who tried to expand the cultural realms of his native land searching for congenial sensibilities in Ireland. He travelled to the Blasket Islands in 1928 and de Toro Santos’s chapter is a precise account of that journey.

Manuela Palacios’s article on women poets in Galicia and Ireland does not follow de Toro Santos’s text, but I would like to make a comment on it here to stress the impact of Irish studies on Galician scholars. Manuela Palacios has written extensively on the literary relations between both cultures, and here she addresses the differences and similarities between the new generation of Galician and Irish women writers who have engaged in a critique of the canon. Her article offers perceptive insights, as when she states that bilingualism may be a source of pain and grief, or when she writes on the critique of religious representations of female figures made by Irish women poets and says that their Galician counterparts have not carried out such an exhaustive revision of Catholic themes.

One of the good things of volumes of a diverse nature like this one is to find specialized articles which handle controversial issues where no easy solution can be reached. In her chapter on Edmund Spenser’s role in Irish writing, Anne MacCarthy is shrewdly alert to the justifications and contradictions of editors of Irish verse for including this canonical author. It should be remembered that Spenser wrote about Irish topics but at the same time he was part of the English colonizing force in Ireland. MacCarthy dissects editions of Irish poetry of the nineteenth and early twentieth century and reveals the ideological criteria behind the selection of Spenser’s poems in these early manuals. The English literary establishment is criticised for toning down Spenser’s involvement in the realities of his time and place, but Irish criticism is equally questioned for borrowing a famous writer in order to add prestige to their literature.

Two of the academics who write for this volume choose as a topic of research lesser known authors: Marina Filgueira offers a contextualized explanation of Penelope Aubin’s The Life and Adventures of the Lady Lucy (1726), a novel set in Ireland, and Begoña Lasa writes on a best-seller of the late 18th century, The Children of the Abbey (1796), by Regina Maria Roche.

Two scholars write on W. B. Yeats: J. Manuel Barbeito applies the Irish author’s esoteric system to Clint Eastwood’s film A Million Dollar Baby (2005) and on Yeats’s own poem «Men improve with the Years» (1916), while Nazareth García Seijas reads the Nobel Prize winner’s poetry taking into account a supernatural perspective. By the way, what do you say in Spanish: «yeatsiano» (García Seijas) or «yeatseano» (Barbeito Varela)? Just curious.

Other articles cover an ample ground of Irish authors and Irish-related topics: the Irish origin of Heathcliff, classical references in Brian Friel’s Translations, the figure of the grandmother in the work of Thomas Kinsella and Richard Murphy, Medbh McGuckian’s recent poems or the «big house novel» in contemporary Irish writing. The book ends with an article on Bernard MacLaverty’s fine novel Grace Notes by Margarita Estévez Saá.