by Tom Walker. This text may be archived and redistributed both in electronic form and in hard copy, provided that the author and journal are properly cited and no fee is charged for access. 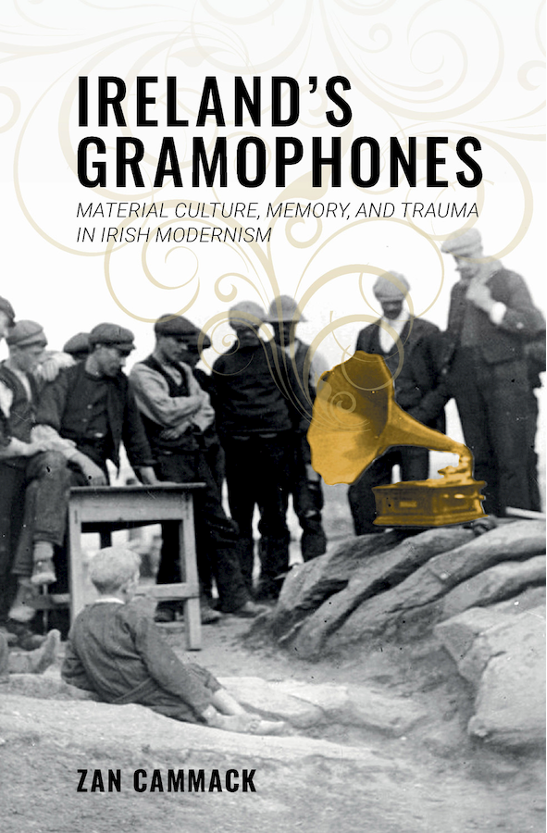 Thomas Edison patented the phonograph in 1877. The following summer, Dubliners were able to see and hear the invention being displayed and demonstrated in a shop on Grafton Street. Those unable to make it there in person could nonetheless read in the Weekly Irish Times of how “the voice can be embalmed by the phonograph, and made to last indefinitely” (40). As Zan Cammack’s Ireland’s Gramophones: Material Culture, Memory and Trauma in Irish Modernism traces, such an attempt to reckon in print with the nature of the phonograph and its close cousin the gramophone recurred across the century that followed. Starting with the much discussed, though fleeting, references to the gramophone in James Joyce’s Ulysses, the study examines in detail the prominent role played by sound recording technology in a succession of Irish literary texts – Bram Stoker’s Dracula, George Bernard Shaw’s Pygmalion, Sean O’Casey’s Juno and the Paycock, Elizabeth Bowen’s The Last September, Lennox Robinson’s Portrait, and Flann O’Brien’s At Swim-Two-Birds – from the 1890s through to the 1930s.

The specificity with which this book, as quoted above, documents the arrival of the Edison’s invention is characteristic of its good use of historical sources to evoke the impact of the phonograph and later the gramophone in Ireland. Another strength is the alignment of such historical details to the machine’s technical realities; this is a book that uses diagrams, graphs, and tables to considerable critical effect. Indeed, such realities somewhat complicate any sense of the aural immortality effected by the phonograph. The preservation and playback abilities of its recording cylinders were limited “since the wax recordings would rapidly wear down after several replays” (7). Hence the emergence a decade later of the flat disk of the gramophone, which was not only more enduring but could be mass reproduced. As the introduction further outlines, phonographs, and gramophones are also not just to be considered as mediums or instruments of sound. At times, they are shown to shift towards becoming quasi-human voices and subjects in these texts. They are also engaged with as material objects, made up of ornate horns and explosive spring motors, behaving – drawing on Bill Brown’s influential theory of how objects transform into “things”- in distinction from their ostensible function.

This contextual and conceptual sophistication as regards the presence of the phonograph and gramophone in Irish literary texts is carried forward into each chapter’s more focused analysis. The first chapter, “Gramophonic Trauma: Shattered Narratives and Undead Oralities,” focuses on the role played in Dracula by the psychiatrist John Seward’s phonograph. This is enlighteningly placed among the novel’s provision of modern media technologies (telegrams, typewriters, cameras) and Cammack discusses how, relatedly, the novel’s narrative “is constructed of myriad media types and formats, including shorthand journal entries, telegrams, letters, and newspaper clippings” (21). Equivalent in scale (36 percent) to the journal entry as a medium for plotting the story, the phonograph is also linked, via Seward’s use of it, to the psychological and, more particularly, to “the novel’s near obsession with memory and its failure” (22). Drawing on references to and resonances with contemporaneous theories of mind, the technology’s mechanical workings and mnemonic limitations, and close attention to “the deeply problematic anachrony of the narrative” (35), the phonograph emerges as representing the compulsions and discontinuities of traumatic memory in the novel. The chapter then attempts to relate the novel’s fictional and fantastic trauma to the broader traumas of post-famine Ireland, set against the emerging prominence of the preservation of oral folklore in Irish culture. Though containing much fascinating detail, especially as regards the role played by the phonograph in the collecting of folklore, this less directly links context to text, offering rather a series of suggestive parallels and resonances.

Stoker’s novel also features extensively in the second chapter, “Gramophonic Gendering: Women, Phonographysteria, and the Political Machine.” It opens with an account from an 1899 edition of the Weekly Irish Times of “Phonographysteria,” a malady supposedly affecting female stenographers driven to hysteria by the effect on their nerves of having to listen to uncanny, disembodied voices. This offers a way of framing the way gender and trauma intersect in literary representations of the phonograph and gramophone. These associations are also placed against a period, from the 1890s through to the 1910s, in which rise of the New Woman and suffragettism intertwined with Irish nationalist politics. The chapter seeks to “suggest that the roiling undercurrent to this gendered object and Home Rule’s specific political tensions subliminally captured the Irish literary imagination – perhaps even more specifically, the Irish male imagination” (59). Focusing on Pygmalion as well as Dracula, the chapter convincingly tracks how Lucy Westenra and Mina Murray-Harker, as well as Eliza Doolittle, are sexualised in being associated with phonographs and gramophones in these texts. These three figures are also associated with Irish politics, starting with the “national implications” (62) of Lucy and Mina’s surnames, and linking Eliza’s declaration of autonomy to the passing of the Third Home Rule Bill (drawing on contemporary, pejorative descriptions of the Irish Parliamentary Party as gramophonic).

In focusing on two male authors in the chapter, Cammack explains, “The Irish New Woman authors, for instance, were less concerned with symbols, and especially not those that seemed to objectify and sexualize women, and were more interested in addressing women’s issues head on” (59). Perhaps this is the case. It might, though, have been useful to know which authors Cammack has in mind, or quite what other issues were being addressed and how, not to mention how this chapter’s argument might be related to broader critical efforts to connect technology and the New Women, who have often actually seen new technology, such as the bicycle, as a vehicle for female emancipation. The passing mention later in the chapter of the gramophone in Edith Somerville’s 1919 novel Mount Music (and the whole related issue of the distinctly gendered role of the spiritualist medium in the period) felt like a missed opportunity in this respect. Here and elsewhere across the study, some kind of implicit, narrowing notion of an Irish canon seems to be in play. For instance, several of Molly Keane’s novels are mentioned in passing in other chapters without being critically engaged with in any detail. It would have been more helpful too to have a greater range of less familiar texts engaged with from the 1890s through to the 1930s, instead of the closing coda’s swift gallop through the gramophone’s enduring literary role into the latter half of the twentieth century. This ends with a consideration of Brien Friel’s 1971 play The Gentle Island and its use of the by now anachronistic gramophone as a manifestation of “the political and cultural strain left unresolved from the early part of the twentieth century” (17), a claim which this book does not have the scope to substantiate and think through to any satisfactory degree.

Related to this canonicity, seems to be the title’s broader label of “Irish modernism.” By this stage in its life, this term seems to have become ubiquitous for reasons that are as much promotional as heuristic. It allows a space to be cleared in the marketplace of the academy for the gathering of these texts, rather than offering any more tangible entry point for their analysis. At one point, for instance, we are told that At Swim-Two-Birds is “now considered a central work of Irish modernism, bridging the works of James Joyce and Samuel Beckett” (151). I am not sure what such a comment actually really tells us about this text or the broader nature of Irish cultural production in the period. At the least, some greater reflection on the term’s uses and limitations, as well as some more concerted attempts to draw further related notions of period and mode into the discussion (the gothic, naturalism, expressionism and so on), would have helped draw out a more distinctive sense of these texts’ differing yet, perhaps, interrelated attempts to represent and comprehend Ireland’s shifting modernity. Lacking is much reflection either on the relationship between modernism, Ireland, and the study’s other guiding terms, material culture, memory, and trauma. Appropriate too would have been a clearer sense of the intersections between Irish modernism and the recent turns made towards the material and the technological in modernist studies more generally. One also wonders if a too-ready conflation of politics in Ireland with the politics of Irish nationhood made some works too difficult to accommodate in this critical narrative.

Putting to one side such reservations, however, the final two chapters offer a compelling series of extended readings of how gramophones feature prominently in works that directly engage with the tumult of the Irish revolution, as well as the complexity of its aftermath into the 1930s. The third chapter, “Gramophonic Violence: The Gramophones of the Irish Revolution,” pairs The Last September and Juno and the Paycock. It opens by situating the gramophone “in the broader scope of the global conflict of World War I, as well as its use in describing and treating a larger psychology of the era” (95). This again draws on some fascinating historical material, such as the way in which the machine was specifically advertised to serving soldiers on the Western Front, and the contentious role it played in the treatment of shellshock. From this emerges an illuminating reading of how in Bowen’s novel different relationships with the gramophone seem to signify diverging senses of conflict and trauma among the British and Anglo-Irish characters. In O’Casey’s play, a still closer connection between the gramophone and violence is seen as occurring via the record-like body and mind of Johnny Boyle, whose traumas are described as “physical mnemonics for Ireland’s cultural scars” (120). At the moment of the play’s final fade into a halting, stunned admission of chaos, “the silent gramophone embodies Ireland’s dead and its stunned and traumatized living” amid the horrors of civil war (128).

The fourth and final chapter, “Gramophonic Strain: Residual Tension in Post-War Literature,” offers a welcome turn towards the non-canonical, in focusing on Robinson’s under-regarded 1925 play Portrait. This draws to considerable effect on the workings of the gramophone’s mainspring mechanism, an understanding of which it shows to be key to the effectiveness of the play’s shocking denouement. Important too is the way in which Cammack recovers the circumstances and responses to the play’s original production, as well as the wider interest Robinson, as Abbey Theatre manager, showed in the gramophone’s theatrical possibilities. The chapter also draws on a welcome degree of historical specificity in its analysis of At-Swim-Two-Birds. Thinking through the novel’s suggestive time frames, intergenerational narrative, and use of myth in terms of both the history of Ireland and the gramophone itself yields a subtle sense of the novel’s ending as politically and psychologically ameliorative. This important account will, I hope, gain significant traction in pushing the growing band of O’Brien scholars back towards the difficult task of engaging with the historical and political implications of this most elusive of writer’s “meticulous details” (158). Indeed, in its marrying of careful textual analysis to historical detail and conceptual sophistication this lucid and engagingly written study should have a significant impact on future considerations of the intersection between technology and memory in Irish writing.