Eamon Maher National Centre for Franco-Irish Studies in IT Tallaght

by Eamon Maher. This text may be archived and redistributed both in electronic form and in hard copy, provided that the author and journal are properly cited and no fee is charged for access. 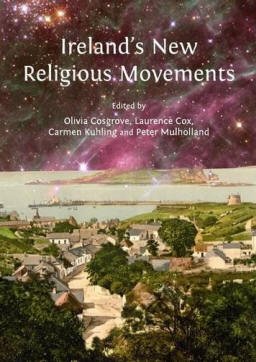 The proliferation of new religious movements in Ireland was the common thread that led to a group of academics from various Irish universities coming together to organise a conference in Maynooth in 2009. The topic clearly had a wide appeal, as can be seen from a total of 44 presentations from 64 participants representing 11 countries and 15 disciplines. The proceedings, published in an attractive hardback by Cambridge Scholars Press, make for interesting reading.

The editors’ Introduction, which deals with the vastly changed religious landscape in Ireland (north and south) during the past few decades, sets the scene admirably. While the Catholic Church, for centuries a hugely influential institution on the island of Ireland, has been rocked in recent decades by the clerical abuse scandals and their subsequent cover-up, the main Protestant and Jewish churches have also been affected by an ever-increasing tide of secularism and materialism. However, religions outside the established churches have continued to blossom. New religious movements are described as being closely linked to the ‘New Age Movement’ in the way in which they bring ‘very large  numbers of Irish people in contact with yoga, meditation, traditional Chinese medicine, reiki and other forms of “alternative” and/or “complementary healing”’ (p.1).  The editors provide the following useful distinction: ‘What makes a “new religious movement” is not the absolute age of its beliefs, sacred texts or practices, but the fact that most of its members are converts, that it has little power, social status or wealth – and that it faces established religions which are embedded in the fabric of society’ (5-6). Christianity itself once fell into this category during the Roman Empire. For a long time Ireland was perceived as being ‘religiously monolithic’, with the result that the scientific study of religions has primarily been concerned with how Protestantism and Roman Catholicism became so closely aligned with ethnicity and state allegiance. Little attention was given to the long history of religious diversity in Ireland, a lacuna the essays in this book seek to address.

The 1960s and 70s ‘saw both a counter-cultural move towards religious innovation or the recovery of supposedly ancient beliefs and practices, and the formation of fundamentalist groups within traditional or mainstream belief systems  and religious regimes’ (9). Certain groups such as the Charismatic Renewal Movement got a hostile reaction from the Catholic Church, while the Moonies were accused of using brainwashing techniques: ‘In 1983, a group of bishops issued a Lenten pastoral warning of the danger of “cults” and “non-denominational Christian Groups”’ (13-14).  Weber’s theory of secularisation maintained that increased rationalisation in the wake of modernisation led to the ‘disenchantment of the world’ and a consequent turning away from religion. This thesis held sway from some time but is no longer viewed as adequate to capture the complexity of reasons why people who abandon formal traditional religious practice often seek new and alternative ways of reaching for the transcendent. The editors rightly note how attitudes are slow to change: ‘In a world where religious fundamentalism and atheist polemic have come back with a vengeance, where spirituality has apparently become more privatised and individualistic, and where religious diversity is now an established fact, the social, scientific, historical and psychological study of new religious and quasi-religious groups in Ireland is definitely worth our time’ (23-24).

Readers will understand how pressure of space will not allow discussion of all 18 chapters in this book. Excising a few of these chapters might have been a good idea, as there are some that are noticeably weaker than others. Malcolm Macourt makes excellent use of the 2006 Census of Population in his discussion of the impact of the ‘New Irish’ on the religious landscape in the south, but he also examines figures from the Northern Ireland Census of 2001. Questions posed in relation to religious allegiance and practice have to be phrased in delicate terms and this can sometimes produce somewhat skewed results. Ireland’s embrace of Buddhism is the topic of chapters 3 and 4. John L. Murphy refers to Michel Houellebecq’s 1998 novel, Atomized, whose main character, Michel Djerzinski, finds in the infinite architecture of cross and spiral in the Book of Kells something akin to Tibetan Buddhism’s contemplation of circular forms of mandalas. At the end of the novel: ‘He unlocks the molecular trigger that allows infinite copying of cells without mutation or disturbance’ (94).

Attracta Brownlee’s chapter on the fascination of the Irish travellers for priests with special powers and New Age healers concludes that travellers, rather than rejecting Catholic beliefs in favour of new religious movements, ‘tend to reconcile and incorporate elements from the new beliefs and practices into their own belief system’ (110). This seems to mirror what many Irish people do: they pick certain aspects of different belief systems and form a type of personal composite religion that covers their spiritual and psychological needs in a more satisfactory manner. Jenny Butler demonstrates that Neo-Paganism is still reasonably widespread in Ireland: ‘The term “Pagan” stems from the Latin word paganus meaning “country-dweller”. Neo-Pagans have reclaimed this original meaning but have also added new meanings to the term’ (114) The affection for traditional ritual sites has never waned in Ireland: ‘The spiritual connections to place are intertwined with mythology and history and these terms continually appear in Irish Neo-Pagan discourse, artistic expression and material culture’ (117). Belief in ‘fairy places’ and pagan gods are characteristic of this movement, whose adherents (including Druids with alleged special powers) often visit places like the Hill of Tara for the summer solstice.

Peter Mulholland’s chapter on the visionary Joe Coleman’s claims that he was the beneficiary of Marian apparitions is a stand-out piece. Mulholland traces the moving statues phenomenon and cites Michael Allen’s assessment of the way in which these were best understood ‘as an attempt by devotees to halt what they perceived as being the moral disintegration of Irish society consequent on the spread of secular values’ (181). In addition, they provided a more attractive and meaningful form of devotion than that which was available in normal sites of worship. Joe Coleman grew up in a world where discipline and repression were commonplace and where negative reinforcement of sexuality and the threat of Hell’s fire inspired fear and trepidation. Mulholland does a type of psychological profile of Coleman and points out that the pain of losing his father at a young age, his self-avowed altercations with the devil, a serious injury that caused him to have to give up work, his visions and healing powers, all led him naturally to espouse a certain spiritual path. Rather than dismissing Coleman’s powers as mere fabrication, Mulholland argues that anyone who has the capacity to get ten thousand people to assemble in Knock for an unsuccessful Hallowe’en apparition by the Virgin Mary deserves to be taken seriously.

Carmen Kuhling observes how during the Celtic Tiger ‘the Irish state became enchanted with its own disenchantment’. The abandonment of organised religions by a large number of people led to a massive paradigm shift: ‘In some ways, unquestioned faith in the texts, apostles, cathedrals and rituals associated with Catholicism have simply been superseded by unquestioned faith in texts, apostles, cathedrals and rituals associated with consumption, and which are bound to the mythologies of economism and neo-liberalism’ (201). In Kuhling’s view, New Age Spiritualities are symptoms of a desire ‘for re-enchantment in the context of both the crisis of the Catholic Church, and more recently the economic crisis’ (201). This seems a more than reasonable thesis. She analyses the etymology of ‘Celtic Tiger’ with the first word conjuring up the image of a romantic, mist-covered landscape whereas the second denotes ‘the rhetoric of competitive individualism’ (205). In such an environment, the allure of the New Age Traveller, whose life ‘takes the form of a pilgrimage, or the search for identity, truth and meaning outside the routines of our daily existence’ (217), is undeniable.

You will have gathered from this brief overview that there is much of relevance in this collection. New Religious Movements are more diverse than this reader had imagined and they seem to answer a keen need in people for a different type of spirituality than that which is being currently supplied by the established churches.  While the editors are to be commended for their fine work, there is nonetheless some evidence of overlap, especially in the numerous references to the disillusionment with the Catholic Church in the wake of the clerical abuse scandals or the perceived need of alternative medicine, which come up in a number of different essays. Overall, however, this is a most welcome examination of a heretofore neglected area, and it is warmly recommended to anyone with an interest in the spiritual evolution of contemporary Ireland.