by Brian McIlroy. This text may be archived and redistributed both in electronic form and in hard copy, provided that the author and journal are properly cited and no fee is charged for access. 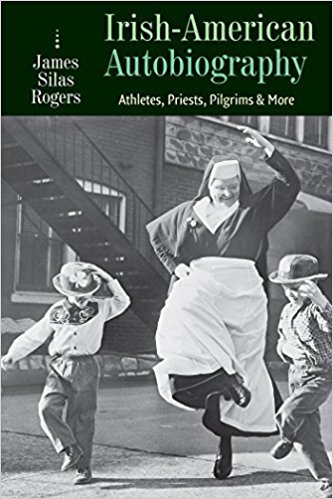 Academic works on autobiography seem to have come into their own in the last twenty years, and James Silas Rogers’ contribution to this corpus is a welcome addition. He focuses specifically on Irish-American texts, building no doubt on his previous publications (2009, 2013) and perhaps seeking to serve as a counterpoint or supplement to Liam Harte’s focus on Irish autobiography (2009, 2017). As the genre dares to put the self at the centre of investigation, if not celebration, one might be forgiven for thinking that the current “selfie” culture and the ubiquity of Facebook and other social media platforms for self-expression might make book-length navel-gazing redundant in the future.  Yet, any perusal of the bookstores still operating shows this not to be the case: both biographies and autobiographies comprise a fair chunk of shelf space.

It’s not hard to see why. Nearly every talk show on television has someone promoting his or her memoir or life story. The celebrity book that promises to go behind the scenes, to the “real” life, is simply an act of seduction, but one for which many are happy to fall. The books are guilty pleasures for readers, who seek to confirm prejudices or find ennobling stories. But it’s not always famous people who write autobiographies, and these lesser-known works should also claim the attention of academics in order to understand a particular period or set of circumstances.  For years, I have casually made a distinction between autobiography and memoir, treating the former as personal investigation and thoughts, and the latter more about the significant people one meets on one’s life path. This loose barrier between the two terms seems to have eroded in the critical discourse, and perhaps one is actually judging a work based on its narrative complexity and “insight” rather than its chronological and external veracity. Creative non-fiction is all the rage in MFA Creative Writing programmes, and it may simply be that in the past we didn’t have the right vocabulary for these works beyond degrees of plausibility. In some sense, to write an autobiography is to make a documentary film of one’s life, a Griersonian “creative treatment of actuality.” The best autobiographies seem to know this intuitively, and yet they all run the risk of the reader’s patience, who must be both entertained and convinced the inevitable embellishments are not outright and egregious lies.

Rogers sees the act of autobiography as an ecumenical religious activity, though I think it would be fairer to say that it has spiritual significance for all participants. His book knowingly only looks at Irish-American Catholic experiences, though this has the virtue of allowing the reader to compare the impact of this cultural background at different historical junctures, from the late nineteenth to the early 21st century.

Rogers divides his book up into ten chapters in his effort to prove his thesis that the assumed “Ethnic Fade” as the Irish assimilated into mainstream America has been overplayed, and that Catholic Irish heritage informs all the autobiographies under scrutiny. The critic begins by examining sportsmen, including the boxers John L. Sullivan and James J. Corbett. Their autobiographies are of note not for the sparkling prose but the clear desire for the men and their class to be seen as moving from “shanty-town” to “lace-curtain” Irish. The desire for respectability and the demand of a form of respect undergird these life stories. Corbett did after all become known as “Gentleman Jim.” It’s not fully clear why Rogers chooses to discuss Barbara Mullen’s autobiography Life is an Adventure (1937), published when the actress was only twenty-four. Her film and television career were all ahead of her, so what we get instead is a reflection on the impact of an absent father (Pat Mullen, who assisted Robert Flaherty in making Man of Aran) and a controlling mother who wanted her to be a dancer. Such an autobiography captures the realities of single parenting in America in the 1920s and 1930s, though Barbara was to reconcile with her father, a moment that ends the narrative. The inclusion of Barbara Mullen as the sole female rewarded with a chapter makes one wonder if men and women approach autobiography differently, or whether the importance of Irish-American heritage is more significant to men’s lives. I would have liked to hear more from Rogers on this possible distinction.

Certainly, Rogers takes us on a journey to rethink the actual term autobiography. He writes a chapter on New Yorker journalist Joseph Mitchell, who, although from Scottish heritage, often wrote of the Irish communities, and by all accounts loved reading James Joyce and drinking in Irish bars. I suppose in a way the journalist by immersing himself in the community begins to record his own life as much as those around him. In much the same way, Jackie Gleason’s The Honeymooners, a long-running TV show purportedly about two working-class families, draws on a specific Brooklyn Irish of Gleason’s childhood. It’s thus not off the mark to consider the TV show as a kind of autobiography, a working through of the social amelioration of an ethnic community. Much of the humour of the series revolved around the desire for upward mobility’s trappings, such as playing golf, but equally an inability to carry them off with confidence.

Rogers devotes his shortest chapter to priest memoirs of the mid-twentieth century. One receives the impression that this must have been a tedious task, as so many of these works rarely provide the moments of human weakness and insight that draw us to life-writing. No Augustine Confessions here. He does find an interesting work, Donald Hayne’s 1963 Batter My Heart. Hayne appeared to be bisexual and was an eager student of comparative religions, so it was only a matter of time before he would leave the seminary. Rogers is disappointed, however, that such an interesting man (who became Cecil B. DeMille’s religious advisor) never seems to let his cerebral guard down. And I think this tells us something about the success of an autobiography; it’s normally one that captures emotional moments that thrust the reader into the writer’s remembered vulnerable past.

One of the strongest chapters in the volume is Rogers’s essay on Frank McCourt’s Angela’s Ashes: A Memoir (1996). The memoir won McCourt international renown, though his unsparing depiction of Limerick provoked widespread unhappiness in Ireland. Accusations of embellishment and exaggeration were levelled against McCourt. Rogers focuses in on the word “Tis“ and the way it pops up in the narrative, not so much as an affirmative – it is what it is or what has been said – but rather as a kind of oral performance, allowing Rogers to see its use as a kind of stand-in for “Maybe”. It’s hard to see how one can truly take McCourt to task if he is writing from his own remembrance of things past. Even if one gets particular elements empirically incorrect, an autobiography lets the reader know how the past felt to the writer.

Another strong chapter involves the South Boston Irish community and the autobiography by Michael Patrick MacDonald, All Souls: A Family Story From Southie (1999). MacDonald’s work all too vividly depicts a community in abject misery, suffering from an illusion that they are a self-regulating community. Indeed, Netflix recently did a series on the Irish Mob, and included individuals from this South Boston neighbourhood. What’s striking is that the community has no longer any strong role for the church, so the ethnic fade seems to have occurred and the only constant is the specific geography, a ghetto perhaps. And yet, it’s a community riddled with crime and poverty. Even one of its supposed street heroes – Whitey Bulger – turns out to have been an FBI informant.

Perhaps an original turn in the book is an analysis of a few memoirs that look specifically at growing up in suburbia. The general consensus is that the suburbs are where the ethnic fade is at its most acute, as escape from the inner-city has been achieved. Yet, Dan Barry’s Pull me Up: A Memoir (2004), a depiction of a Long Island community that was hastily formed in the early 1960s searchingly explores the tentacles of his parents’ Irish and Irish-American background. Rogers is surely correct to argue that the suburban memoir is a more generally held experience, and indeed one where the Catholic Church reasserted itself as integral to the community.

Rogers ends his entertaining book by considering the recuperative nature for Irish-Americans of visiting Ireland. Much has been written on this “Roots” phenomenon. I must confess I may have rolled my eyes on occasion at the way every American president must have his Irish connections researched, but among the less famous one cannot deny the healing power of understanding where your parents or grandparents came from. Naturally, there is a commercial aspect to this. Rogers quotes the voice-over for a Mastercard ad directed by Jim Sheridan:  “Plane tickets to Ireland $1200. Train fare to the town where your mother was born: $63. Drinks at the pub where she met your father: $8. Finally finding out where your mother is coming from: Priceless.” (150). Rogers seems to end his study with the reasonable belief that autobiographies are acts of healing or a coming to terms. The best not only order experience to explain how you became the person you’ve become, but pick out key emotionally troubling moments, give them a proper airing, and hopefully lay them gently to rest.