by Mike Griffin. This text may be archived and redistributed both in electronic form and in hard copy, provided that the author and journal are properly cited and no fee is charged for access. 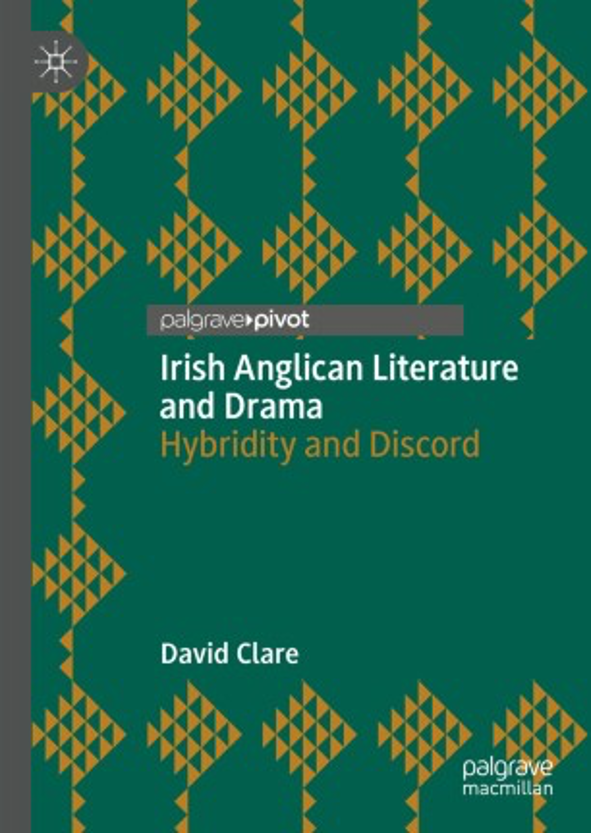 Part of the Palgrave Pivot series, which facilitates the publication of research “at its natural length” (somewhere between a long essay and a shorter monograph), David Clare’s book on the Irish Anglican tradition in writing and theatre history is a concise, accessible, and effectively argued work which complicates and transcends the vague, addled, and obsolete term “Anglo-Irish.” The term has long muddied the study of Irish literary history, giving as it did no nuanced account of differences in class, theology, or geographical location within the Irish Protestant population. Clare’s key innovation here is to better define Irish Anglicans as a subset of Irish Protestants, separate from other Protestant cultures in Ireland such as those of Presbyterianism, Quakers, and evangelicals, but marked by its own class divisions and distinctions. Clare argues for a greater understanding also of the extent to which Irish Anglicans exist along a cultural spectrum between Irishness and Englishness. Some authors from the Anglican tradition saw themselves as English in Ireland or Irish in England or both, while others again saw themselves singly as Irish, no matter what others thought.

Clare begins his study by quoting Brendan Behan’s amusing distinction between social classes as troubling that blanket category of Anglo-Irishness, implicitly conceived by some, then and since, as an essentially and intrinsically aristocratic part of the Irish population. Behan’s comment on such racialised classism is an excellently chosen departure point:

The myth of the Anglo-Irish, and the attempt to drag writers (particularly those who happened to be Protestants) after the fox-hunt and the royalist inanity, would have us believe that the most rapacious rack-renting landlord-class in Europe were really lamps of culture in a bog of darkness, doing good by stealth and shoving copies of Horizon under the half-doors of the peasantry after dark and making wedding presents to the cottagers of Ganymede Press reproductions of Gaugin. (2)

Clare nuances Behan’s “invective” with an allowance for Big House authors who were not as exploitative as the landlord class more generally tended to be; and, while some writers considered “Anglo-Irish” were rich, other Irish Anglican writers came from working-class backgrounds. Behan’s suggestion that the term “Anglo-Irish” be reserved for Big House writers and that lower class Protestant writers should be considered simply as Irish was a view that, for Clare, elides “all that Irish Anglicans from every social class have in common with each other” (4). He argues, further, that there is and has been a “unique mindset” among Irish Anglicans that derives from their historical ascendancy over Catholics, dissenters, and Jews in matters political. Also important has been Irish Anglicans’ connection to England specifically. In his introduction and its notes, Clare makes compelling arguments that relate his study to more contemporary hardenings and softenings of political attitudes on the island of Ireland, and to the mixings of viewpoints resulting from a separation of political worldviews from religious affiliations.

What follows in Clare’s study is a series of essays/chapters on individual authors or clusters of authors from the Anglican tradition. The second chapter is a timely and engaging consideration of the work of Elizabeth Griffith, whose dramatic works were performed in London between 1765 and 1779. Her work, like many in the tradition that Clare delineates, was intended in the first instance for a London audience but, alert to metropolitan blind spots on Irish social and political matters, engaged that audience with an often critical outsider’s perspective. Clare’s considerable pedigree as a theatre historian is evident here: he gives an account of Griffith’s work that alludes also to her Irish contemporaries and their reception in England. He reads her life and work as culturally hybrid, consisting of a duality that plays out in her plays’ ironies and relationships, and convincingly proposes that her work deserves more attention that it has received up to now from scholars, and at least as much as has been dedicated to playwrights such as Arthur Murphy and Hugh Kelly. He may indeed be right, and proposes that the #WakingTheFeminists moment may be an opportune time to rediscover her work in live performance.

The following chapter spreads its concerns across the lives and works of three male authors – Dion Boucicault, Bram Stoker, and Erskine Childers – who wrote across genres but, again, primarily for English audiences. Ostensibly critical of English imperial attitudes and attitudes towards the Irish in particular, Clare argues that their works are more politically ambiguous, even inert, than their authors’ reputations would suggest. Boucicault was a nationalist, Stoker a Home Ruler, and Childers ultimately a determined Republican. In the case of all three, however, Clare argues that, whatever their politics, the deliberate alienation of their intended audience might have been commercially counterproductive. The separation of these authors’ convictions from their works is emblematic, in a sense, of the hybrid identities – one might even say imperatives – of some Irish Anglican authors in the later nineteenth and early twentieth centuries.

Returning to the (later) eighteenth century, the next chapter expands upon the work of Leith Davis and Lesa Ní Mhunghaile in its engaging treatment of the influence of Charlotte Brooke’s Reliques of Irish Poetry (1789) on near contemporary and subsequent Irish Anglican authors Maria Edgeworth, Sydney Owenson, Mary Balfour, and Lady Gregory. The chapter begins and ends with Gregory and her conversion to cultural nationalist politics following the death of her bigoted, exploitative husband, William Gregory of Coole Park. Lady Gregory’s conversion had its key precedent in the moment of Brooke’s Reliques, which anticipated the antiquarian explorations of other notable Irish Anglican authors interested in and engaged with Gaelic culture. Brooke’s contribution, concludes Clare, was to demonstrate “that it was possible to be (authentically) Irish in the English language” (79). Frank O’Connor proposed that Brooke found a path that Samuel Ferguson, James Clarence Mangan, and W. B. Yeats would follow, but Clare here diversifies that lineage to include the Irish female canon.

S. Lewis is the unexpected subject of the fifth chapter. Lewis thought of himself as Irish, though his career took place entirely in England. Often read in the light of an English tradition from Chaucer to the later English Romantics, Clare here teases out the influence on Lewis of several authors from the Irish Anglican canon. Lewis’s first collection, Spirits in Bondage (1919), was heavily embroidered with Yeatsian motifs and images and featured characters from Irish mythology in common with Yeats’s verse. Clare also proposes the conflicted influence of Shaw on Lewis’s writing and gives an intricate account of Lewis’s wrestling with Shaw’s concept of the Life Force. The influence of James Stephens’s The Crock of Gold (1912) is then adduced. From here, however, the study takes a somewhat counter-intuitive chronological turn. Swift’s Gulliver’s Travels (1726) was frequently referred to in Lewis’s work, and influenced elements of his fantasy writing. Clare suggests, and this is at the more speculative end of his interpretation, that Lewis read Gulliver’s Travels with less of a sense of horror than Aldous Huxley, George Orwell, and D. H. Lawrence because he was, like Swift, Irish. On firmer ground, it is suggested that Lewis shared an anti-colonial perspective with Swift, evident in the former’s The Chronicles of Narnia (1950–56) and The Cosmic Trilogy (1938–45). Lewis’s Irish Anglican pantheon also included Goldsmith and Burke, whose conservative sensibilities were consistent with Lewis’s moral traditionalism. The chapter takes another chronological turn back to the late Victorian milieu, and the influence of Oscar Wilde, before returning to the eighteenth century and the influence of Laurence Sterne and George Berkeley. The chapter on Lewis is absorbing, but might have been better served by a chronology similar to that of the chapter on Brooke’s legacy.

Less diffusely, Chapter 6 deals with Leland Bardwell’s 1977 novel Girl on a Bicycle in a very satisfying single text study. In Clare’s sensitive reading, the novel portrays the internal diversity of Irish Anglicanism, from the world of the Big House Anglicans who retain a cultural affinity with England, and working class Anglicans from outside of Ulster whose Irishness is full and real however much Catholic nationalists might suspect it. The Protestantism of the novel’s protagonist Julie de Vraie is of Huguenot derivation, stemming from that French artisanal and professional demographic which had been assimilated into Irish Anglicanism in the eighteenth century. Julie’s Anglicanism is not aristocratic, nor does it separate her from the generally Catholic working class population. Her class background pulls her towards a liminal status between the aristocratic Anglican world and that of the labouring Catholic. She retains an element of cultural Britishness at the same time that she resists assimilation into the world of her aristocratic employees. The social and political suspicion of Protestants, no matter their place in this spectrum of hybridity, is a source of resentment in this, and in Bardwell’s other novels. Throughout Bardwell demonstrates, in Clare’s words, that “the nature and degree of an Irish Anglican’s Irish/British hybridity varies, depending on where one is located on the social scale and where one resides” (134).

Concluding as he began, Clare relates his literary study to contemporary discussions of the nature of Irishness. A more nuanced awareness of the diversity within Irish Protestantism, to which this compelling study of Irish Anglican culture contributes, will be of assistance as Ireland embraces, in Clare’s words, “more hyphenated identities,” including those of “the ‘New Irish’ and, potentially, in due course, Ulster Protestants” (135). The phrasing “in due course” nods to contemporary shifting demographics and political change north of the border. There, Brexit is having a destabilising effect on the very identities that as a project it sought to consolidate; in a timely way, then, this excellent and concise study equips us with an insightful account of the historical and cultural ambiguities that imbue our present.