by Loretta Goff. This text may be archived and redistributed both in electronic form and in hard copy, provided that the author and journal are properly cited and no fee is charged for access. 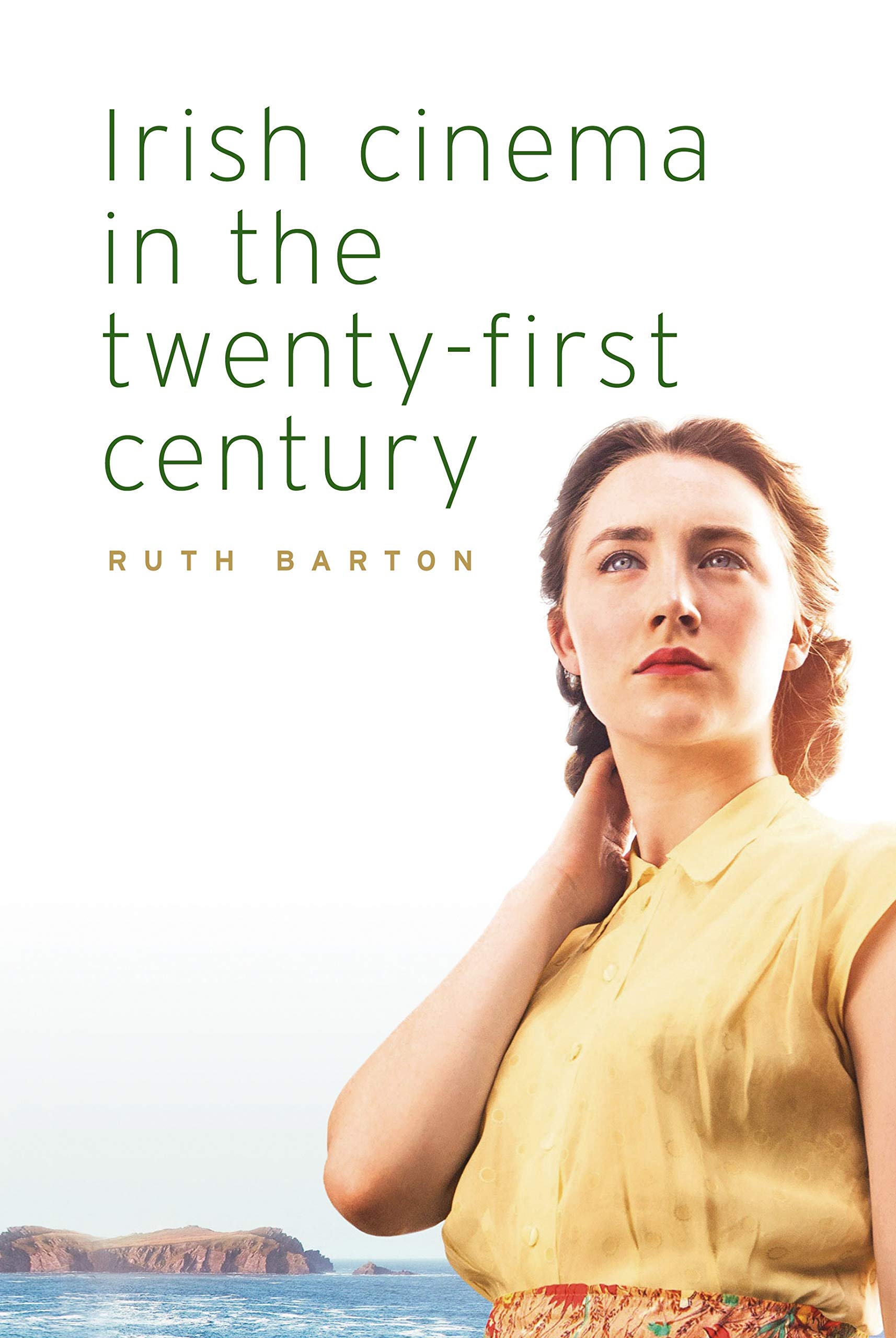 The last few decades have seen Ireland undergo significant change, with the economic rise and downfall of the Celtic Tiger period, shifting tides of emigration and immigration, and resultant socio-political transformations. As a result of Ireland’s rapid globalisation during this period, persistent questioning of what it means to be “Irish” has entered public debate in recent years. The same question can be applied to the nation’s cinema, and is one that Ruth Barton grapples with in Irish Cinema in the Twenty-First Century, updating her previous monograph on the topic, Irish National Cinema (2004) to reflect the changes in both Irish society and the Irish film industry since that publication. Barton’s focus in Irish Cinema in the Twenty-First Century thus expands to include the emergent success of Irish horror, animation and short film, as well as to highlight the underrepresented role of women across the Irish film industry.

Structurally, Barton gives weight to the previously less-discussed areas of Irish cinema in her monograph. After providing context with an overview of the production (including funding, audiences, politics and classification) of Irish film in Chapter 1, Barton gives precedence to animation (Chapter 2), horror (Chapter 3), and documentary (Chapter 4), before moving on to revisit and elaborate on the areas of history and trauma (Chapter 5), post-troubles Northern Ireland (Chapter 6), rural Ireland (Chapter 7) and the city (Chapter 8). Uniquely, and importantly, she intersperses these chapters with brief analyses of seven short films. Short film production proliferates in Ireland and plays an important role for Irish filmmakers, particularly for those getting a start in the industry as these films often act as an entry point for funding. However, despite this and the international success of many of these films, with several receiving Academy Award nominations (including Late Afternoon [2017] and Detainment [2018] most recently), academic analysis in this area remains limited (though the site Gearr Scannain, an offshoot of Irish film site Scannain, does offer an online platform for short films). While a chapter is not dedicated to short films here, they are brought to prominence through these dedicated spaces between chapters wherein Barton’s analysis of them functions as a thread to weave the sections together. In this way, increased attention is drawn to the shorts and the reader is able to reflect on how they fit within the broader themes of the work as a whole.

Also woven throughout Irish Cinema in the Twenty-First Century, rather than given chapters of their own are the roles of gender, ethnicity and other aspects of identity in Irish film. As Barton notes in the introduction, “questions of Irish identity/identities, whether gendered, racial, ethnic, class determined, place-specific or informed by sexual orientation, remain at the heart of most analyses of Irish film” (8). The identity of Irish film itself is explored here in much the same way an individual or national identity might be. Barton discusses the national cinema in the context of globalisation and transnationalism, attempting to locate a distinctive Irish cinema in an era of co-productions that often defy local or national classifications. Indeed, this is reflected in the films themselves. Barton argues that “within the Ireland that contemporary cinema evokes, place is increasingly contingent. Who may make their own place in the national space or how they can do so is a fraught dynamic that calls into play factors of class, gender and race” (13) and that “Irish cinema is above all engaged with identity politics” (18). Therefore, various categories of identity are returned to and elaborated on throughout the book.

Barton particularly notes that it is her “intention to foreground representations of women in contemporary Irish filmmaking throughout this book” (20) – something she noticeably achieves. In Acting Irish in Hollywood (2006), Barton commented that “since the revitalization of the Film Board in the early 1990s, Irish cinema has overwhelmingly favoured narratives dedicated to issues of masculinity” (224), and that the lead female roles in many Irish productions were “occupied by imported actors, thus denying rising indigenous performers the opportunity to play on the international circuit” (225). She picks up on this in Irish Cinema in the Twenty-First Century, noting that the recent international success stories of Saoirse Ronan and Ruth Negga “suggest a much greater population of female stars than actually exists” (35). Importantly, Barton brings her focus on gender imbalance to roles behind the camera in the Irish film industry as well. In Chapter 1, she discusses the low percentage of female writers and directors applying for and receiving funding for projects (and acknowledges that these numbers are even worse for ethnic minorities). It is notable that the Irish Film Board (now Screen Ireland) launched a plan to promote gender diversity in the industry through its funding schemes in 2015, and have since seen a rise in funded projects with women directing (from 20% in 2017 to 36% in 2018) and writing (from 20% in 2017 to 45% in 2018) (“Gender Statistics”). Barton plays close attention to the role these women play in shaping the construction of Irish films throughout the book, alongside interrogations of the representation of women in the nation’s cinema.

After outlining the production context of, and setting the scene for, Irish film in Chapter 1, Barton goes on to examine one of the big successes of the Irish film industry in the twenty-first century in her second chapter, “Animating Ireland”. This chapter begins by situating animation within the national cinema, noting its ability to “question otherwise fixed identities, reimage space and destabilise linearity”, thus functioning in interesting ways that can “destabilise or question paradigms” (43). Barton then breaks down Ireland’s animation output into categories of those produced for global television (financially successful) and those concerned with Irish themes and creating a distinctly Irish animation tradition, which draw attention and esteem to Ireland’s animation industry, but often make a loss despite critical success. The latter category is Barton’s focus in this chapter after sie addresses the history of Irish animation and the country’s two leading animation companies – Brown Bag Films and Cartoon Saloon. Using The Secret of Kells (2009) and The Song of the Sea (2014), both produced by Cartoon Saloon and nominated for Academy Awards, Barton considers the invention of a national style of animation that is visually distinct in its 2D, hand-drawn artistry, and that incorporates Irish history and mythology in the modern era.

Chapters 3 and 4 then focus on two additional areas of the Irish film industry that have proven particularly successful in the last few decades, but which have been underrepresented in academic discussion – horror and (creative) documentary. Barton locates the origins of Irish horror with the establishment of Roger Corman’s production studio, Concorde Anois Teo, which produced low budget horror and exploitation films in Connemara. Though these films largely contained no Irish themes, Barton notes that most Irish horror films can be positioned as both distinctly Irish and globally recognisable (appealing to larger horror audiences). Indeed, space, place, and the tensions and border-crossings of the local and global – familiar and other – are central to the analysis in this chapter. Drawing on the work of other scholars of Irish horror, such as Emma Radley, who first noted the genre’s disruptive potential and links to the changing Ireland of the Celtic Tiger era, Barton aptly explores key themes in Irish horror as representative of cultural fears and traumas: colonisation, late and rapid globalisation and modernisation, race, religion, and the environment. Similar themes are explored in the chapter on documentary film, with a particular focus on “geographically and socially marginalised identities” (92) as well as creative practices in the industry. Not only does Barton reflect on the social issues addressed in these films, but the style in which this is done, paying particular attention to the artistic documentaries of Irish auteur Pat Collins.

Following these chapters, Barton enters more well-trodden areas of Irish cinema in Chapters 5-8, which cover history and trauma, Northern Ireland, rural Ireland, and the Irish city on screen. However, she identifies new trends and themes within these areas, including LGBTQ+ cinema, and the shifting portrayals of space and gender in the contemporary period. Important new films are incorporated into Barton’s analysis here, including Brooklyn (John Crowley, 2015), pictured on the cover of the book, which is examined as a reworking of the heritage film, and A Date for Mad Mary (Darren Thornton, 2016) and Handsome Devil (John Butler, 2016) as exemplary of new directions in Irish queer cinema. These recent films are not considered in isolation, but in terms of how they are situated within or respond to longstanding trends in Irish cinema, and/or Irish cultural expression and representation more broadly. Through this, Barton clearly demonstrates the various directions that Irish cinema has taken in the twenty-first century thus far, beyond its emergent success stories of animation and horror, and proffers an understanding of how and why constructions of the nation on screen have developed.

Irish Cinema in the Twenty-First Century is a valuable contribution to the area of Irish film studies that marks the changing shape of Ireland’s film industry and national cinema during and after the Celtic Tiger. Addressing the nation, and the local, within the frameworks of globalisation and transnationalism, Barton deftly scrutinises the tensions and struggles of identification – individual, spatial, and national – evident in Ireland’s films, and in the industry itself. The book offers both a broad overview of key contexts, themes, and genres in Irish film, but also detailed close analyses of exemplary filmmakers and significant films that give shape to what can be considered Ireland’s national cinema. An accessible read, and very reasonably priced in paperback and e-book formats, this book will not only prove extremely useful to students, researchers and lecturers in Irish studies or film studies, but will also interest general readers who want to learn more about these areas.