by E. Moore Quinn. This text may be archived and redistributed both in electronic form and in hard copy, provided that the author and journal are properly cited and no fee is charged for access. 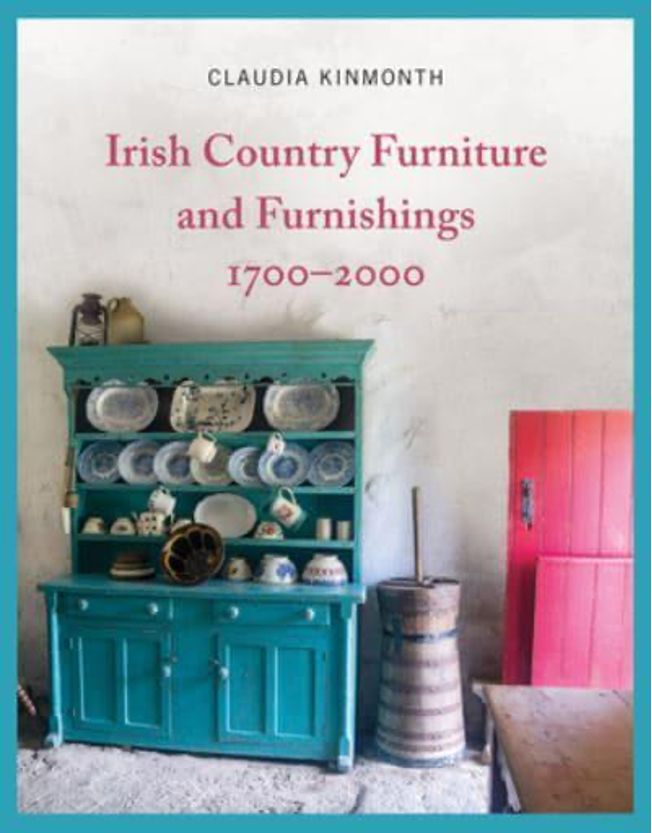 Claudia Kinmonth’s voluminous knowledge regarding the material culture of traditional Ireland shines forth in the pages of her latest work, Irish Country Furniture and Furnishings 1700-2000. This is to be expected, for her effort extends by fifty years Irish Country Furniture and Furnishings 1700-1950, which she wrote in 1993 and published with Yale University Press that same year. The comprehensive and largely rewritten introduction not only provides a substantial overview of what the following ten chapters contain, it also sets the tone for the author’s rich woodworking, folkloric, and poetic perspective on Ireland’s cultural past. From the outset, readers are prepared to experience how that past was understood, preserved, stolen, and, increasingly in the present era, lost. For Kinmonth, the Irish house leads the way, influencing the kinds of furniture found within dwellings as simple as one-room cabins. In later times, when less tightly enclosed spaces could accommodate more furniture and a greater number of material cultural items, house adornment expanded accordingly.

The book is arranged according to type, not region, due to the uneven nature of the materials found in various counties and time periods. One finds, for example, that Scotland influenced Ulster’s cutlery, by way of the horn spoon, and its sleeping accommodation, by way of the outshot bed. Styles like cupid’s bows, hearts, shamrocks, and fiddle sides are discussed; so, too, are the characteristics of specific furniture pieces. The dresser’s “sledge foot,” for example, was designed so that it could be replaced when floor dampness caused it to fall into disrepair.

As in another of her earlier works, Irish Rural Interiors in Art (Yale University Press, 2006), Kinmonth draws from paintings, sketches, illustrations, engravings, pencil drawings, and even postcards to provide the visual accompaniment that is so welcome – nay, so needed – in a book of this kind. Repeatedly, figures and images align with and testify to the author’s narrative; they are complemented further by evidence from diaries, inventories, governmental reports, and more. A key aspect of Kinmonth’s methodology is her fieldwork: to acquire the data she so assiduously presents, she knocked on doors in the Irish countryside, seeking the types of extant pieces of furniture that could enlarge Ireland’s woodworking story. She then studied and photographed what she viewed, a method that enabled her to detail the contextual features of furniture in situ as well as in use. This inspiring undertaking is a distinct boon, for although folk museums and other repositories of Ireland’s material cultural past attempt to reconstruct that which was, they cannot compete with the ability to observe the actual placement of items – paired beds, built-in dressers, cranes, and keeping holes – located just as they were many years ago.

In addition to presenting the history of Ireland’s furniture and furnishings, Kinmonth shares some of the major events that precipitated changes in them. These include the end of the Napoleonic Wars, when shifts occurred in agriculture; The Great Hunger (An Gorta Mór), when family members were forced to burn household goods for warmth; and the period of the Celtic Tiger, when transformations in Ireland’s values took their toll on household design and decoration. What is left, Kinmonth reveals, is a treasure on the one hand but a vanishing trove on the other. “[T]he rejection of old houses,” she writes, “inadvertently contributed to the wholesale destruction or exportation of the furnishings they once contained” (17). With statements like this, Kinmonth conveys the importance of preserving the materials that marked and defined Ireland’s former ways of life.

One of the great strengths of Irish Country Furniture and Furnishings 1700-2000 is that it can be approached from many angles. Although readers will be drawn to chapters that augment their personal knowledge and interest, it is worth emphasising that every chapter has something to offer. The aforementioned introduction supplies a blueprint for the entire work. Suggestive of their importance and provenance, the first five chapters cover stools and chairs, settles (including seats, beds and tables), dressers (with the author’s finely tuned attention to display), storage of food and clothes, and beds. Chapters six to nine are devoted to press beds (and other disguised beds), cradles, tables, and hearths, and shrines. The final chapter considers small furnishings and utensils.

It was often the case that construction was motivated by availability. Unique furniture compositions of bog oak, often made of yew and fir, reveal the individuality of their makers. Other pieces were composed of rush, straw, willow, and even turf. “Wreck timber” or “wreck wood” – that is to say, wood recycled from shipwrecks – was put to good use. One outstanding example can be seen in the hearth of an early-eighteenth-century farmhouse; Kinmonth notes that “its brick smoke canopy, supported on timber from a shipwreck, was cracked when nearby mines exploded on a nearby beach” (124). It is this kind of additional contextual information that makes this book so engrossing.

Interesting is the fact that imagination played an important role in furniture creation; so, too, did imitation. Some of the woodworkers who observed the stylistic features in the decor of the more affluent copied what they saw, fashioning their own pieces with less expensive stock. The finished products resembled those made of mahogany and other more costly and/or imported woods, because craftsmen used saved pieces of hair combs, tire parts, and leather fragments as wood-graining devices.

Perhaps not unsurprisingly, most of the wooden pieces found in Kinmonth’s book are unsigned, made by male members of households who produced “everything that people needed, from the cradle to the grave” (3). On the other hand, the author attends to professional woodworkers like Christopher Sullivan from Lauragh, County Kerry, Patrick Cronin from Skibbereen, County Cork, and several others whose reputations were well established. Evocative of the stuff of pure hilarity is Kinmonth’s coverage of craftsmen like Cronin who not only made their own coffins but were also buried in them. Beforehand, however, some chose to stand their personal end-of-life creations upright in the corners of their shops, a decision that provoked humour as well as horror. Narratives like these are found throughout the book; collectively they goad readers to delve more deeply into the multiple ways that Ireland’s domestic furniture was not only constructed but deployed. With her functional focus, Kinmonth notes that many items, including coffins, could double up, serving their original purpose but also provoking the folkloric imagination when the time was right.

Indeed, folklore is well represented throughout the work. A blessing written by Anonymous might be understood as a toast:

Long may you live, happy may you be

One to wash the dishes, one to sweep the floor,

In addition to well-wishes like this, Kinmonth provides many examples of what certain items meant to the people who used them, how they regarded their home possessions, and how they cared for the things they owned. Readers will become acquainted with the socio-religious salience of holding annual “stations” in homes for the purpose of upgrading and improving from top to bottom a family’s dwelling. They become privy to the fact that good luck could be obtained by placing the dresser opposite the hearth. They learn the importance of “the room.” This little-used parlour, known in certain parts of Ireland as “the west room,” was opened only for special occasions.

Irish language idioms and expressions are peppered throughout the book; one encounters terms like poll an phaidrín, a recessed space near the hearth for storing rosary beads. Also known as “the keeping hole,” it could hold clay pipes as well. An leaba théastair is a tester or canopy bed. The word sráideog means a sleeping arrangement which was created in former times by spreading straw or rushes on the floor on a daily basis. Irish words with English language counterparts, like cléibhi (English clevy or clavy, a pair of hooked brackets for holding a spit over a mantelpiece), and naigín (English noggin, a straight-sided mug) aid readers’ understanding of how linguistic items were interwoven with people’s beliefs and behaviours.

If idioms, expressions, and actions highlight Kinmonth’s displays of Irish material culture, so, too do stanzas of poetry and snatches of song. A verse from T. C. Irwin’s Versicles speaks of “cracked delph full of flowers fair” (262), “delph” being a traditional way to refer to crockery, derived from the Dutch town Delft, known historically for its tableware. The author quotes lines from Séamus Heaney’s “The Settle Bed” (150) and those from Robin Flower’s “The Dance” (161). Although W. F. Marshall’s lines “There’s a low house, a thatched house / At the foot of Bantown lane” are cited, arguably it is Padraic Colum’s poem “An Old Woman of the Roads” that fits the mood of Kinmonth’s opus most admirably. Its opening lines establish a mood:

O to have a little house!

To own the hearth and stool and all!

The heaped up sods upon the fire,

Nor does Kinmonth stop there; in another section, Colum’s poem surfaces again:

A dresser filled with shining delph,

Speckled and white and blue and brown!

I could be busy all the day

Clearing and sweeping hearth and floor,

And fixing on their shelf again

This romantic image of Ireland’s dwellings and the goods to be found therein is balanced with its alternative: the “hard row to hoe” reality of Irish life. Kinmonth provides multiple examples of the constant work – scrubbing furniture by lake and stream, twisting rope, stuffing upholstery, caring for brooding livestock – that occupied the days and nights of Irish women. She chooses lines from Oliver Goldsmith’s “The Deserted Village” (337), a poem which laments the loss of a way of life.

With Anonymous’s lines from “Lament for the Woodlands”: “What shall we do for timber? / The last of the woods is down …” (17), Kinmonth informs readers not only of the dearth of suitable building material in Ireland but the reasons for it. She is forthright in her descriptions of antique dealers from abroad who “arrived complete with modern upholstered furniture with which to barter” for Ireland’s material cultural furnishings (xviii). In an endnote, she divulges that the most insatiable of the thieving lot went so far as to hack out built-in dressers by cutting them in half, a move that caused traditional houses to be weakened “beyond repair” (477).

Kinmonth leaves readers wanting more. Despite the hefty size of the book, it would be of benefit if religious items like the altar or home shrine had been given their own chapter; the same is true for the hearth. Considering the latter’s importance in Irish culture, especially prior to the coming of electricity – but even beyond that time in the west and northwest counties of Ireland – more coverage on the significance of the fireside and its folklore would have been welcome. Perhaps in the future, the author will devote an entire book to the Irish hearth.

In sum, although a discussion of each and every aspect of Irish Country Furniture and Furnishings 1700-2000 is precluded by space and word constraints, readers should be apprised of the fact that much more information is contained within the book’s nearly five-hundred fifty pages. In the reading or perusing of them, woodworkers, scholars of folklore and memory, and the myriad others who long to know more about Irish material culture and gain a more substantive appreciation of Ireland’s cultural past will be enlightened by the author’s choices of images, figures, and comprehensive resources. They will realize that they are in the presence of a scholar as well as a practitioner, one whose remarkable respect for Irish vernacular furniture takes its place alongside the likes of E. Estyn Evans, Alan Gailey, Kevin Danaher, and many more.