by James McGrath. This text may be archived and redistributed both in electronic form and in hard copy, provided that the author and journal are properly cited and no fee is charged for access. 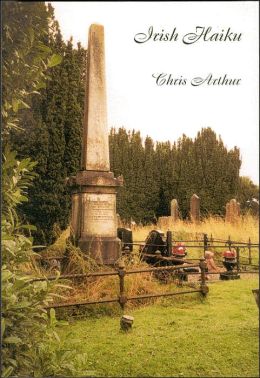 In his third book of prose reflections, Chris Arthur reminds us that “essay derives from essai, to experiment”, and uses the term ‘Irish haiku’ to define his distinctive approach to ‘creative non-fiction’. Strongly influenced by Zen Buddhism, he cites haiku as the supreme verbal testimony to “seeing what’s here, right now”. Yet though this poet’s prose is frequently epiphanic in haiku-like moments, he does more than see (and show): he philosophizes. Thought is the natural consequence of perception in these ten subtly interrelating essays; they adopt gradually Joycean structures in their shifts of focus, but represent less streams of consciousness, being more like meditations.

For Arthur, an important aspect of the present is memory, and though he now resides on the British mainland, his Protestant upbringing in Antrim forms the background of Irish Haiku. However, he appears more interested in how individuals form rather than are formed by cultures. Arthur chronicles formative events in Ulster’s history (particularly his hometown, Lisburn), but considers the Presbyterian Northern psyche primarily by “concentrating on the margins”, invoking a fascinating cast of outsiders.

The marginalised figure who (in ‘Miracles’) most illuminates the religious attitudes that dominated late twentieth-century Ulster is Brother Erskine, Arthur’s former school chaplain. Brother Erskine had served as a commander in the Sahara desert and would tell his pupils: “Go there before you die, brothers, stand in its vastness at night”. Perhaps significantly, Erskine “taught English as well as scripture”; he sparked controversy in 1970 when, preaching in Belfast, he suggested that the miracles were not to be understood as literal events, which elicited vehement objection from the Presbyterian Church and local media. Arthur intuits that Erskine, like himself, could not believe in “violation[s] of the laws of nature”, but instead saw miracles in “nature and its laws themselves”. Arthur’s exposition of this marks the only compromise of his otherwise unobtrusive narrative style; his defence of Erskine’s liberalist stance is expressed with dogmatism almost reflecting that of the literalist opposers. Yet, Arthur writes that “Within the literal, another voice is always singing”, and this essay’s beautifully subtle imagery redeems the harshness of its scepticism. To begin unpacking the metaphorical implications of ‘Miracles’ and other essays is for the reader, not the reviewer; it is enough here to point to Arthur’s implicit depiction of the war-weary, ever-questioning Erskine as one crying in the wilderness to exemplify the symbolic resonances of this book.

Arthur asserts that “Imagination and empathy, as much as anything inquiry yields, are what we rely on to make history”, and in ‘Obelisk’, illustrates how. He writes of his great-uncle, whose brief existence was seldom mentioned by the family, due to his apparent suicide. Arthur’s archival investigations provide much insight into attitudes to this subject (and to police and clergy) in nineteenth-century Antrim, and his gradual disclosure of pivotal details in his search to understand this man’s death is immaculately judged. The tragedy is not diminished by his ‘plotting’ of the information, but enhanced by it; profoundly so when he acknowledges that the mystery may never be resolved. This signifies a fundamental quality of Irish Haiku: it offers no clean conclusions, but re–introductions to the familiar: “the real is also remarkably elusive”.

The margins of personal memory are also explored. In ‘What Did You Say?’, Arthur struggles to recall fragments of conversation with his late father, but identifies an intriguing aspect of how language is preserved when he recollects little more than the Ulster dialect terms he used. In evoking his local habitation within an intellectual narrative, Arthur honours Antrim much as Richard Hoggart does Leeds.

One of Arthur’s most appealing strengths is his ability to create atmospheres which, though gentle, are tacitly dark, as he shifts between remote cottages, graveyards, canals, shops, gardens, and streets.Irish Haiku is manifest with a sense of stillness; partly because the setting is essentially the past. Yet, Arthur’s Ulster remains unsentimentalized. His uncompromising honesty and recognition of present concerns reflect the Zen-like clarity of his outlook, as well as that of his style.

In ‘How to See a Horse’, a consideration of the image, signifier and even biological consistency of this mammal, Arthur succeeds in the challenging practice of writing about a painting before encouraging us to see through modes of communication by seeing the modes themselves. “Media tend to be rendered invisible.” Here, he exposes language as much as he rejoices in it: “‘Horse’ can of course be harnessed and made to pace and prance in simple sentences.” His critique of the illusions of media suggests a further significance of the tranquillity with which he evokes Antrim. According to Arthus, “the sheer pervasiveness of modern media often confers on symbols the semblance of reality”, and cautiions that “visitors to Northern Ireland in the 1970s, when terrorism was at its worst […], thought Ulster would be a war-zone.”

Conflict is a prominent concern in these essays, but Arthur addresses it with wisdom and lucidity. In ‘Witness’, language, memory and reality are (as throughout the book) fundamental concerns. Each is considered in the context of the author’s “encountering a terrorist in a second-hand bookshop”. Arthur asks: “Did I see a terrorist? Or did I see a lost and miserable boy?”, before lamenting: “Perhaps one of the tragedies of modern Ireland is our resolute staying at the surface”. This marks the greatest pertinence of Arthur’s meditative style; to return, with emphasis, to his earlier comment: “imagination and empathy” are “what we rely on to make history”. Arthur is a writer who demonstrates and promotes these virtues; he is also charismatically knowledgeable on an eclectic range of subjects, artistic, historical, philosophical and spiritual. His quotations mark his influences: Voltaire, Adorno, R.S. Thomas and Buddhist scriptures.

Arthur evokes second-hand bookshops as places where “you’ll pick up something unanticipated and suddenly find doors opening into other worlds”; the same is true of Irish Haiku. This book is highly recommended to anyone interested in the essay as a form, and essential for readers wishing to follow developments in Anglo-Irish writing at the start of the twenty-first century.