by Martin McLoone. This text may be archived and redistributed both in electronic form and in hard copy, provided that the author and journal are properly cited and no fee is charged for access. 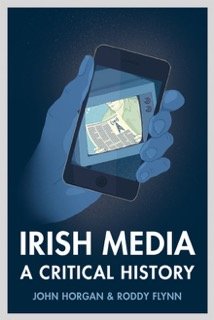 In terms of our media we certainly live in interesting, if disturbing times.

Two recent media items, one international and one local, illustrate this very well. Both raise fundamental issues about social media, about information dissemination and about media ethics and provide a gloomy scenario for the concept of an informed and stable democratic space. The first story was in The Guardian newspaper in January 2019, a piece that interviewed five people who were the victims of conspiracy theories in the USA that were largely fomented online and through social media. Some of these seem to be beyond rationality – the pizza restaurant owner who was accused of running a paedophile ring in the basement of his restaurant on behalf of Hilary Clinton, for example – and some have been around for many years – the MMR vaccine controversy that has ruined the life of the American doctor who has debunked the original evidence of a link to autism. (In the same paper a few weeks earlier, John Naughton ran a piece decrying the way in which the internet and “social media echo chambers” can enable far-right conspiracy theories that have tragic and violent consequences). The second item comes from Ireland. At the end of last year, there was a minor skirmish on Twitter over a tweet from journalist (and failed presidential candidate) Gemma O’Doherty, who lamented the “latest act of insanity against Ireland” by the political elite who “dole out citizenship to another 3,000 people today”. She was accused by many of the respondents on her timeline of pandering to the small but growing Irish “alt right” and doing so by employing the language of Trump and anti-immigration fear mongering. Whether she intended to do this or not, it illustrates well how social media can be the foundation for conspiracy and the platform for counter charge.

These examples also show that in the age of Trump, “of fake news” and Brexit, the question of media ethics, journalistic responsibility and dispassionate reporting – indeed the question of truth itself – are under increasing challenge. I was reminded of these stories and the issues they raise after reading John Horgan and Roddy Flynn’s excellent critical history, Irish Media and especially their rather sombre account of where we are today in regard to media ethics.

John Horgan’s insightful and measured history of the media in Ireland was first published in 2001 and established itself as an important text in general media and journalism courses as well as an invaluable secondary/background text in film and television studies. The book was premised on the notion that the media generally both reflect and impact on society in increasingly complex ways and that by tracking the development of the media in Ireland against the country’s changing social and political circumstances, this complexity could be mapped out and better understood. This new reprint largely keeps intact the central chapters from this original publication and forms the bulk of the book’s historical overview.

Horgan’s project was to track the development of the print and broadcast media in Ireland (north and south) from the foundation of the new dispensations in 1922 until the turn of the millennium in 2000. This project proceeded chronologically, narrating the various stages of change and development in Ireland’s newspaper, radio and television industries throughout the decades of the twentieth century, especially in relation to key political, social and cultural events. By looking at the media together in this way, in both Ireland and Northern Ireland, Horgan’s study established not only a clear development narrative but also demonstrated in detail how the different media interacted with one another at various points along the way. This approach offered breadth and depth to an analysis of the media’s collective impact on the changing societies that sustained them.

Central to his argument was the fact that the media in Ireland came to play a key role in both state and nation building, in sustaining and exploring a sense of collective identity, and was therefore, never far from generating or being sucked into political controversies. Furthermore, since governments quickly came to realise the enormous influence that the media could have, the question of media policy and regulation was a constant debate throughout the years, one that became more complex as changing media technologies and patterns of ownership completely changed the nature of governments’ ability to manage, regulate or control.

Horgan is, of course, uniquely equipped to undertake such a task. He has been a participant in and an astute observer of the Irish media for over fifty years now, as both a print and broadcast journalist, a politician, a media academic who became Professor of Journalism at Dublin City University and finally, and most tellingly, as Ireland’s first Press Ombudsman. He held this post from its inception in 2007 until he retired in 2014 and in 2012, he used the Irish experience to make a much lauded intervention to the UK’s Leveson inquiry into press media ethics, an inquiry that remains essentially unresolved today in a climate which has reached new depths of suspicion and angst in Brexit UK.

In his careful chronological survey, Horgan outlines the way in which governments attempted to regulate this growing media influence, either through hands-off regulation or, when deemed necessary, through direct censorship and control. Not surprisingly, a key question for Horgan is the question of media ethics and especially the duties and rights of journalism to both reflect society as it changes but also to hold to account those with economic, social political and religious power. Media ethics were particularly challenged in the 1970s and 1980s as the violence in Northern Ireland escalated and in these chapters Horgan outlines the complex and sometimes traumatic relationship between the media and the state especially in the fields of news and current affairs reporting.

In this new revised and updated version of the original book, Horgan has been joined as co-author by his DCU colleague Roddy Flynn and again, given that Flynn has been at the forefront of academic studies into Irish media ownership and regulation for two decades now, this has proved an altogether appropriate collaboration. The original central chapters from the 2001 book are retained here with only minor revisions and some necessary updates. The authors have usefully “topped and tailed” these original chapters with a new first chapter that considers the state of the Irish media in the years before independence and partition and three further chapters that explore the media landscape in Ireland from the year 2000 down to 2016, with a very useful and very thorough account (presumably the work of Flynn) of how patterns of ownership and regulation changed as digital media technologies developed rapidly. What is most striking about the new material, then, is just how much Ireland and its mediascape has changed in the relatively short timespan since the first edition of the book was published. The Irish economy became increasingly globalised and neo-liberal as it moved from boom to collapse in 2007/8 and government policy changed from free-market liberalism that rode the wave of affluence and optimism to retrenchment and austerity. The resulting economic recession threw the press in Ireland in particular into crisis and one of the new chapters carefully and with considerable attention to detail, maps out just how the printed media sank into “an abyss” which, even today, it has barely emerged from.

The last two decades has also witnessed the growth and development of new digital technologies and social media platforms that have revolutionised the way in which information is gathered and disseminated and has thrown traditional patterns of media ownership and information consumption into ever increasing flux. To explain this the authors have usefully delineated the traditional media and the new digital forms as “legacy” media and “hybrid” media and although the old and the new continue to interact – one needs audiences, the other content – they exist now in a complex pas de deux that has considerable impact on notions of objective truth and fact.

It is interesting that in the dog days of the UK’s torturous Brexit debate much praise has been lavished on the Irish media (and Irish politicians) by the liberal British press for their deeper knowledge of and more informed, less dogmatic approach to the complex issues involved. But there is a small Irexit lobby out there, there is an increasing anti-immigrant sentiment floating around and if it is today quite marginal and unrepresentative, it is well to remember that it once was too in the UK. Reading Horgan and Flynn’s history, it is clear that the democratic “public sphere” has come under the same kind of pressure in Ireland from neo-liberal, market-driven forces as it has in other developed economies and that traditional patterns of news and information dissemination have changed just as irrevocably as they have elsewhere.

The point of history is surely to learn from it and what this book does is to remind us that the search for objective fact in our media has always been problematic and that there is often a lack of fit between the governors and the governed in relation to what we should know and what we can say. This excellent study reminds us that we cannot be complacent about the strength of our democracy and the stability of our freedoms. There have always been challenges to our right to information and our ability to ask questions of those in power. The media may have changed and the nature of information may have become more diverse but the right to a fully informed public sphere remains a priority for the health of democracy. Horgan and Flynn show that the media have always been a key element in the struggle over such an informed public sphere and as we move forward, into an increasingly monetised and fragmented media future, the media remain democracy’s great hope and democracy’s great threat.