Irish Myth, Lore and Legend on Film by Dawn Duncan

Irish Myth, Lore and Legend on Film by Dawn Duncan

by Beatriz Kopschitz Bastos. This text may be archived and redistributed both in electronic form and in hard copy, provided that the author and journal are properly cited and no fee is charged for access. 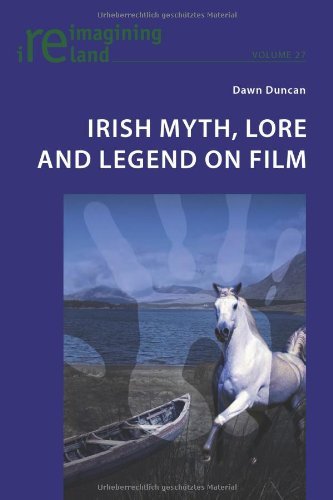 Dawn Duncan, Professor of English and Global Studies at Concordia College – Moorhead, Minnesota, USA, is recognized internationally for her expertise in Irish Studies. In Irish Myth, Lore and Legend on Irish Film, volume 27 of the series Reimagining Ireland, produced by Peter Lang, she demonstrates the maturity of a qualified scholar, teacher, writer, and leader in academic organizations. The book is interdisciplinary in its approach, global in its scope, and originated from teaching practice.

One of Duncan’s previous works as a researcher and writer, Post-Colonial Theatre and Irish Drama, 1800-2000 (Edwin Mellen Press, 2004), became an integral part of the theoretical debates that prevailed in the field of Irish theatrical studies until recently, and added an element of interdisciplinarity to the discussion, by introducing arguments based in sociolinguistics. Her role as a leader in the academic milieu, as a long-standing member of ACIS, The American Conference for Irish Studies, and executive member of IASIL, The International Association for the Study of Irish Literatures, lends her work an international scope to be found in the output of few critics. Finally, as its introduction states, the book results from teaching practice – in the “Global Studies” and “Film Studies” programs at Concordia College. She expresses gratitude to her students for enabling these programs to bear fruit in a scholarly project: “I especially want to thank my students in my seminar on ‘The Magic of Myth in Literature and Film’ for going with me on a learning journey that inspired my research (…) which then expanded to become the larger project contained herein” (ix).

Two themes – journey, and the function of myth, lore and legend – are the main templates that structure the five chapters of the book. These five chapters examine nine films based in stories that tell the life journeys of heroes or heroines – and are unified by relation to a theoretical basis proposed by Carl Jung, and adapted by Joseph Campbell. The films she analyses are: Into the West (dir. Mike Newell, 2002); The Secret of Roan Inish (dir. John Sayles, 1994); In America (dir. Jim Sheridan, 2002); The Quiet Man (dir. John Ford, 1952); The Matchmaker (dir. Mark Joffe, 1997); Michael Collins (dir. Neil Jordan, 1996); The Wind That Shakes the Barley (dir. Ken Loach, 2006); Veronica Guerin (dir. Joel Schumacher, 2004); and In Bruges (Dir. Martin McDonagh, 2007).

Some of these films are better known than others, or have been more successful commercially. No predominant chronological criterion was applied to their selection or grouping. The unity and structure of the publication is ensured by the interdisciplinary dialogue with the Jung/Campbell thesis, aided by other theoretical and critical interventions, which are always in dialogue with previous criticism of the corpus selected for analysis.

As an initial example, Chapter I – “Irish Images on Film and the Hero Journey: A Theoretical Introduction” – appropriately puts forward the assumptions that will guide the next four chapters, centred on the life-arc concept, constructed by Joseph Campbell, known as “The Journey of the Hero”. According to Duncan, this is “integrally linked to moving from childhood to adulthood, gaining along the way ‘the courage of self-responsibility and assurance’” (2).

Chapter 2, “Childhood and the Magic of Myth”, is an analysis of the first three films in the study – Into the West, The Secret of Roan Inish and In America. Together, these films most clearly represent the journey of the hero as “the movement from childhood to responsible individual capable of giving to others” (3), in which the protagonist children are “called to adventure because they must break the paralyzing hold of grief on their families” (4).

Chapter 3, “Falling in Love and the Lore of Matchmaking”, includes The Quiet Man and The Matchmaker in its central corpus of “texts” to illustrate a further step in the arc-life of heroes or heroines: “Only after reaching responsible individuation, a sense of wholeness and well-being, is the mature individual ready to be able to enter into a mutual love relationship with another” (3).

Of the five chapters, the one most embedded in historical context, Chapter 4 – “Serving Society and the Legend of the Rebel” – is also the one that explores some of the most successful films in this study, and some of those most widely previously discussed, with the exception perhaps of The Quiet Man: Michael Collins and The Wind that Shakes the Barley. The acclaimed masterpieces by Neil Jordan and Ken Loach are analysed in equally masterly fashion in terms of the narratological cultural appreciation of the film that constitutes Duncan’s approach. This chapter uses the template of the journey to focus on another step for the responsible adult in his progress: finding a way to serve society – which, in Irish films, has most often been coupled with sacrifice for the nation.

The closing chapter of Duncan’s itinerary, “The Journey of the Contemporary Anti-Hero”, intentionally subverts her own route, and is possibly, therefore, the most creative one. She explains: “There is also merit in troubling the frame of this arc, which is why this book ends with a consideration of how all of this might be both put to use and turned upside down with an image of the Irish anti-hero and the complexities of criminality and heroism in Veronica Guerin and In Bruges”.

There is much to recommend in this volume. Passionately written, humanistic in spirit, entertaining as text, and academic in approach, Irish Myth, Lore and Legend on Film offers a new scholarly toolkit for those in the field of interdisciplinary studies: it considers film as cultural writing; is anchored by psycho-anthropological theory; and is embedded in historical context. Moreover, the book fits perfectly into the purpose of the series of which it is a part: “Reimagining Ireland interrogates Ireland’s past and present and suggests possibilities for the future by looking at Ireland’s literature, culture and history and subjecting them to the most up-to-date critical appraisals associated with sociology, literary theory, historiography, political science and theology”, as the publisher submits. Without avoiding controversial subjects, the author positions herself within the contemporary debate, provoking and encouraging the audience’s active engagement in the journey proposed.
So let the readers now speak!