by Deirdre Brady. This text may be archived and redistributed both in electronic form and in hard copy, provided that the author and journal are properly cited and no fee is charged for access. 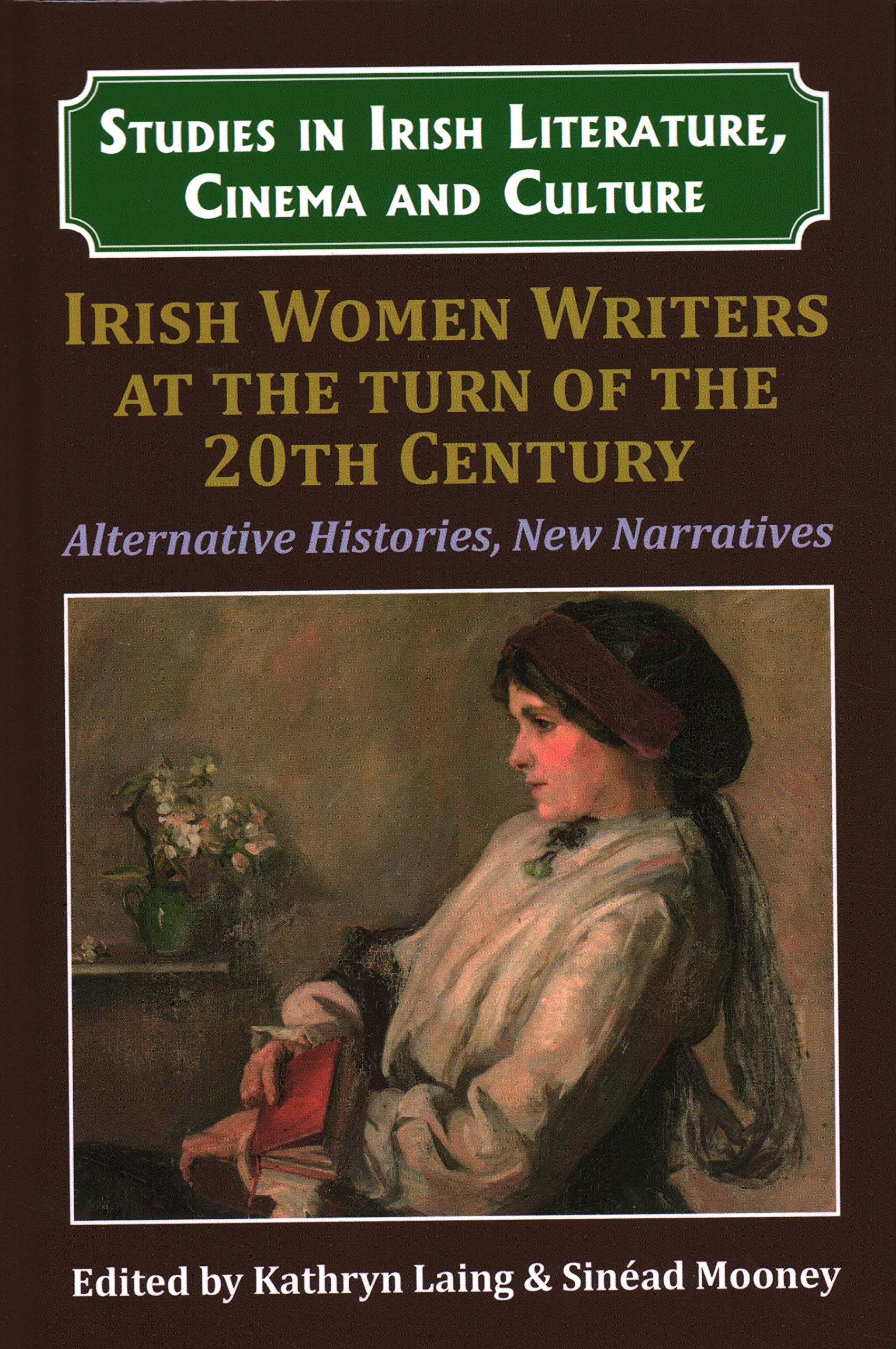 Irish Women Writers at the Turn of the 20th Century: Alternative Histories, New Narratives, edited by Kathryn Laing and Sinéad Mooney, is a welcome addition to the field of Irish literary studies, opening up new avenues for current and future research and re-imagining existing scholarship with an angled lens. As the subtitle suggests, this book follows in the trajectory of recent developments in feminist historiography, with new ways of thinking and interpreting women’s writing that connects past recovery projects with the present. This includes the Irish Women Writers (1880-1920) Network, whose launch precipitated this volume of essays and started the process of fermenting, distilling, and expounding new ideas that interweave within this volume.

This book takes us along a literary voyage which disrupts received notions of women’s writing. The interspace in which literary criticism takes place unsettles old narratives and introduces new ones. It addresses ideas such as the occlusion of women’s voices, silences in famine literature, esoteric philosophies of the pacifist mind, “green sensibilities” of the first-wave feminists, vegetarianism, masculine degeneracy, intellectual journals, spiritualism, and literary networks, among other themes. These alternative histories and multi-angled perspectives continuously challenge the reader to view the fissures, cracks, and silences in literary history that have characterised canonical works in the late nineteenth and early twentieth century.

As the first in a series in “Studies in Irish Literature, Cinema and Culture”, edited by Dr Pilar Villar-Argáiz, this collection of essays provides a critical axis between the revival of less-known writers such as Elizabeth Priestley and Hanna Berman and the reconsideration of works from established writers such as Katherine Cecil Thurston and Edith Œ Somerville. The book is organised in two sections, “New Perspectives’” and “Recoveries”, with sixteen chapters in total. The first part of the book consists of nine essays that focus on recreating new narratives of existing critical scholarship in a manner which is intelligent, focused, and academically robust. The intention is to provide the reader with a keen sense of the “palpable energy that is currently driving scholarship in this field”, demonstrating the insightful and imaginative skills of the editors. The collection underscores the progressive nature of late-nineteenth-century and early-twentieth-century thinkers and writers negotiating the rough terrain of a gendered landscape.

The editors, Laing and Mooney, are well-regarded for their work in recuperating women’s histories and bring this expertise and intelligence in their choice and layout of the essays. The cover, artfully designed, speaks to its readership evoking a sense of contemplation and reflection. The volume begins with the topic of vegetarianism and animal advocacy, exploring connections between Irish feminists and writers, Eva Gore-Booth, Alice Stopford Green and Margaret Cousins. In this essay, Maureen O’Connor expertly considers her subjects through the lens of new feminist materialism, evoking new histories of the links between vegetarian and suffrage movements and their associations with anti-imperial sentiment. New narratives in feminist criticism can also be gleaned in subsequent chapters. Seán Hewitt looks to recent developments in ecocriticism to illuminate the “innovative” writing skills of Emily Lawless as she negotiates the natural world through the figure of a child. Similarly, Lia Mill’s re-reads the pacifist writings of Gore-Booth through the prism of esoteric principles and posits that Booth “stood her ground against injustice no matter how unpopular the cause”.

The collection includes new readings of the period which will be of interest to feminist scholars and those concerned with Irish print culture. Gendered concerns are the focus of two of Somerville’s and Martin Ross’s texts, French Leave (1928) and Somerville’s “Little Red Riding-Hood in Kerry” (1934), interpreted by Julie Anne Stevens and Anne Jamison respectively. These two essays are the subject of a critique which delves deep into the material. They reveal the influence of international relationships in fictional women’s artwork, alongside the “multiple intertexts” and manipulation of European fairy-tales to represent gendered social concerns. Matthew Reznicek’s excellent essay on Thurston’s novel Max (1910) explores the fluid identity of feminist geographies that re-imagines spaces and gender in a transnational framework. The bold and risky strategy of including two essays from canonical writers pays off. In the next chapter, a fascinating perspective on the writings of Thurston by Sinéad Mooney sheds light on the deranged and diseased characters in her work and its focus on discourses of degeneration in the fin-de-siècle, illuminating new perspectives in Irish literature. Christopher Cusack’s paper provides an original narrative of women’s contribution to famine literature, disrupting the “myth of silence” which has cloaked the topic. He pinpoints one hundred and thirty examples of literary fiction, which has been elided by the canonical process, post revivalism, suggesting new areas for future investigation. So too, Aintzane Legarreta Mentxaka explores the symbolism of silence in women’s fiction and its use as a literary technique to suggest intellectual thought in New Woman literature. These alternative perspectives underscore the shifting nature of critical debates in literature while evoking the primary aim of the book to consider “initial recovery work” and “established names” in multiple contexts.

New scholarship drives the second part of the book. Entitled “Recoveries”, it focuses on the excavation and recovery of forgotten or neglected writers and the retrieval of their biographies, publishing histories, literary networks, and texts. With each essay, new conceptual pathways reveal hidden histories, opening-up areas for interdisciplinary study. The reconsideration of the period necessitates new forms of cultural recovery and new modes for conceptualising women writers. It seems fitting that it begins with the exploration of the role of women writers in intellectual journals such as the Nineteenth Century. In this essay, Heidi Hansson puts forward a persuasive argument calling for renewed attention to periodicals as a “genre of its own”. The call for a reappraisal of literary scholarship is reinforced in subsequent chapters with appeals to further honour the achievements of women writers who have been forgotten or neglected. This includes the writings of Ethel Colburn Mayne, which Elke D’hoker notes is neglected in literary histories. She argues for renewed interesting in Mayne as a writer of the short-story form, and precursor to subsequent Anglo-Irish writers.

Evoking the spirit of the intellectual and thinker Hannah Arendt, who advises us to “look on the past with new eyes, unburdened and unguided by any traditions”, this intelligent and thought-provoking volume provides new modes for conceiving cultural production and recuperating lost histories. Mary Pierse’s interrogation of the life and work of Elizabeth Priestly provides a blueprint for how to “do research”. Examining publishing records, biographical data, and Priestley’s significant contribution to feminist recovery projects, Pierse presents us with “a story that must be retold”, that embodies much of the aims of the editors, in mapping out new foundations for future scholarship. These include exciting new insights into the role of less well-known women journalists, novelists, and chroniclers of their time. Examples include the literary journalism of correspondent and fiction writer McDougall. This essay by Lindsay Janssen underscores the courageous achievements of professional writers operating against the constraints of women of the period. Writing for the Canadian newspaper, the Montreal Daily Witness, McDougall’s newspaper reports straddle the “reality boundary” of the conditions during the Land Wars, yet remain as a critical eye-witness account of the evictions and poverty in Ireland during the late nineteenth century.

The importance of networks and connections to cultural production and their influence on literature is a growing area of interest in Irish studies. Patrick Maume and Barry Montgomery offer a sensitive portrayal of the works and artistic connections of Erminda Rentoul Esler and Hannah Berman, respectively, thus underscoring recent scholarship on the dynamism of literary life in Ireland seen through the prism of coterie culture. Furthermore, Lisa Weihman’s analysis of Theodosia F. W. Hickey’s novel Easter Week (1933) highlights how Hickey used her family connections (her father was the well-known writer George Birmingham), correspondences, and contemporary newspaper reports to construct her historical fiction. These essays capitalise on this rapidly increasing field and offer a starting point for educators, scholars and those who are interested in this area.

Overall, this edited collection of essays showcases how the excavation of women’s cultural production does not follow a linear line. As a snapshot of the direction of scholarship in Irish studies, it is an inspiration for future research. For the editors, Laing and Mooney, this was not an easy task, but one which they achieved successfully. The women portrayed in these essays were not a homogenous group with one-directional thinking and writing. They were diverse, politically driven women writers’ intent on equalising the literary field with their stories. They continue to inspire us. As O’Connor reminds us earlier in the book, “The women discussed here defy mere chronology, continue to be our contemporaries and our educators”.