by John McDonagh. This text may be archived and redistributed both in electronic form and in hard copy, provided that the author and journal are properly cited and no fee is charged for access. 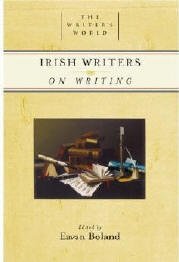 The first page of Eavan Boland’s fascinating collection Irish Writers on Writing is a list of contributors, and it is a veritable B to Y  (no As or Zs, I’m afraid!) of the great and the good of Irish writing over the past century. The list includes all of the major poets, playwrights and novelists from Yeats to Banville and Boland has to be commended for the breadth of writers included, from the canonical to the marginal, whose reflections on the process of writing vary from the self-indulgent to the comical. Boland’s generous and self–effacing preface identifies what many of the contributors hint at, that Irish writing is not ‘a closed canon but a living tradition’ and the impression that emerges from the brief essays and excerpts is just how important writers and writing are to the Irish psyche. She notes that many of the pieces are ‘quirky’ and ‘off the beaten track’ but this only adds to the attraction of this cornucopia of passionate beliefs on the vitality and importance of writing in Ireland.

What is particularly interesting about Irish Writers on Writing is the sheer variety and range of opinions expressed. The collection opens, almost inevitably, with William Butler Yeats’s “The Galway Plains”, one of the early treatises on the nature of the development of modern Irish literature. Yeats’s exhortation is the familiar call for Irish literature to be redolent more of the people than of literary pretensions and it is a call that was be found amongst many of those involved in the literary revival of the late 19th/early 20th centuries and it echoes in the pieces from George Russell, Lady Gregory and John Millington Synge. As the authors are listed chronologically by birth, a subtle change can be detected as the Free State emerges from the tumult of the War of Independence into the almost inevitable disenchantment that follows in the wake of such a crisis. For example,  Brendan Behan’s acerbic reminiscences of a meeting he had with Robert Smiley, the all-powerful editor of The Irish Times, are recalled in an excerpt from Confessions of an Irish Rebeland in it Behan rails against the pretentiousness and small-minded nature of the literary scene in Dublin. This resentment over the legacy of the literary revival is echoed in hilarious pieces from Myles na gCopaleen and Patrick Kavanagh in which they attack those who set themselves up as the guardians of Ireland’s literary heritage. These pieces clearly highlight the fact that at all times in Ireland’s literary development the dominant figures are challenged by a new generation of writers not prepared to accept either reputation or status as the sole basis for respect. Indeed, the somewhat lofty aspirations of the essays early in the book stand in contrast to the anger and sense of disenchantment that emerges in the 1950s.

The more contemporary writers in the book certainly focus on an eclectic range of topics, all loosely held together under the twin umbrellas of writing and the changing nature of contemporary Ireland. Paula Meehan, for example in a powerful poem entitled ‘The Statue of the Virgin at Granard Speaks’, recalls the tragic death of Ann Lovett in Granard, Co. Longford, in 1984, after giving birth to a baby in a grotto outside the town on a cold, wintry morning in January. Lovett was only 15 and her death and the death of her baby appeared to epitomise a society utterly ill at ease with those who stand outside the accepted social and moral order. The poem is wonderfully evocative and it highlights the crucial role played by literature in the examination of Irish society, a searing eye trained constantly at a culture imploding under the weight of its manifest inconsistencies. This is arguably the greatest legacy of Irish literature and Irish Writers on Writing brings this social reformation to the fore. While the aesthetic is, of course, vital in the understanding of literature, so too is the social, cultural and political context from which it emerges. The pieces by Paul Durcan and, unsurprisingly, John McGahern, re-emphasise the shifting paradigms of Irish identity as the twentieth century drew to a close.

The inclusion of Colum McCann’s interview with Kate Bolick as the penultimate essay in the book appears to copper fasten the change in focus apparent in Irish literature over the decades covered by the book. McCann’s perspective as a writer is certainly what one could call international, and the concerns raised by Behan and Kavanagh seem to be a world away from McCann’s desire to locate a new literature beyond the intellectual and geographical borders of Ireland. During the course of the interview McCann  asks himself an interesting and salient question related to his novel set in a working-class neighbourhood of New York City: «Can you morally step into someone else’s world and attempt to recreate it?» His answer is revealing; «Fuck it, I stand where I stand, I write what I write». This somewhat brash self-confidence in both self as writer and a temporal setting outside of the traditional would appear to be trademarks of contemporary Irish writers and can also be seen in the pieces from Micheal O’Siadhail and Brendan Kennelly. McCann is advocating a borderless future for Irish writing, no longer consumed by apparent hierarchies nor obsessed by what Kavanagh castigated as a frenzied parochialism. It is to Eavan Boland’s great credit that her book charts the choppy seas that Irish literature has negotiated over the past 100 years in short pieces that are accessible, funny, self-effacing and enlightening. The book itself is a welcome addition to the very tradition it seeks to disentangle.