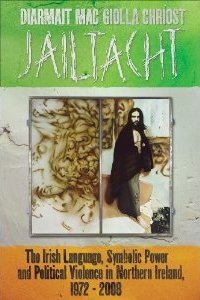 “Jailic” developed among political prisoners in the North; on their release, a “Jailtacht” radicalised community groups in the 1980s, shifted republicans towards political accommodation in the 1990s, and commodified a stretch of today’s West Belfast for “struggle tourism”. Dr. Mac Giolla Chríost grew up in Derry City. He acquired Irish during the 1980s at QUB − followed by a “self-exile” into the Welsh-speaking heartland that earned him a Readership in that language at the University of Wales. He knows intimately that “symbolic terrain” where Celtic cultural claims to political independence reverberate as personal recovery of native tongues.

He combines engagement with distance. The combination of the two standpoints leads him to analyse Irish as “the defining symbolic element of the political violence that has shaped the history of Northern Ireland and, to a great extent, the relationship between the UK and the Republic of Ireland”. By interviews with ex-prisoners, he explains Jailic’s acquisition, its use as formulaic “language strings”, and its sociological impacts. Graffiti and mural depictions, along with archival and online research, demonstrate his diligence. (I appear among those “ordinary cybercitizens” documented who address Jailic in a “public space”.)

Historical contexts precede chapters respectively on close readings for stylistics; the “performativity” of managing incarceration, creating social identities, and building a “sense of place”; signs and murals as “visual grammar”; and  ideology in the “grey literature” produced by republicans − and loyalists.

He locates the emergence of “Jailtacht” not in Long Kesh’s cages of the early 1970s but in the mid-1980s, after the 1976 reversal of political to criminal status among republicans incarcerated — when “Jailic” itself was coined. After the hunger strikes, prisoners circumvented an Irish ban. Blanket protesters on a wing shouted out phrases at set times of day, with varying levels of fluency. Gearóid Mac Siacais recalls: “Thosaigh an Ghaeilge ar bhonn slándála agus chríochnaigh sé mar theanga labharta na blocanna.” (“The Irish language started as a basis for security but ended up as the spoken language of the Blocks.”) This transformation in the late 1970s, over eighteen months, enabled Irish to be spoken by three hundred rather than the seven or eight inmates who had carried the language into the H-Blocks from the Cages.

Some cellmates may have been less eager, but spoken (or shouted) Irish dominated. Texts were smuggled in (and out); nails scraped lessons into concrete. Prisoners deployed Irish against “criminalization”. A post-strike lull in fluency was countered by an intensive six-week course smuggled in by Máirtín Ó Muilleoir. By the late 1980s, constant Irish infiltrated his dreams, Séanna Walsh confides.

Mac Giolla Chríost delineates usage. As argot, tokens as catch phrases peppered English speech. As a medium for deeper communication, Jailic’s divergence from Gaelic norms − given limited or no opportunities for formal education − evolved into “rough, natural accents” and rote idioms acquired by repetition rather than effort. The “comms” shared in the blanket protests and hunger strikes, as well as texts by Bobby Sands, Gerry Adams and comrades, display orthographic and articulated distinctions from, or similarities to, Irish outside prison. By the mid-1990s, the imprisonment of republicans schooled in Irish, as well as access to external materials, signaled a “fossilization” of Jailic as markers of its diction and pronunciation persisted among its freed inmates. This spread into poetry, plays, and films about the Gaeltacht na Fuiseoige, the Irish-speaking community of the Lark, in honor of Bobby Sands’ pen-name.

Performance of Irish forced a congenial space within prison. Filthy walls filled with scrawled vocabulary, while the Jailtacht encouraged collegial teaching of the language, rather than student-pupil hierarchies. The Gaelicisation of given names (as with Sands) proves an intriguing case study in how diligently and imaginatively prisoners and activists adopted or adapted identities to further ideological commitments.

These, in turn, gained proclamation, frequently in the Gaelic font, on murals, as street names, and in signs. These appeared within the Shaw’s Road Belfast emerging Gaeltacht, and as daubed slogans or graffiti elsewhere in that city or Derry. Monuments to the fallen, banners in demonstrations, and paintings asserting solidarity by the incorporation of Basque, Arabic, or Catalan content show the wider cultural components associated by Irish-language leftists with nationalist or radical insurgencies abroad.

“Fianna Fáil Gaelic and Sinn Féin Irish” sums up ideological squabbles and linguistic shibboleths amidst political deviations from conventional Irish conceptions of language: in its teaching, its form, and in its public role as the “first official language” of the Republic. Not only loyalists but nationalists debate its state-sponsored funding or subversively anti-establishment presence. Within the Jailtacht, Irish became a living language once again, while the Gaeltachtaí struggled to sustain Gaeilge as a communal channel of exchange and a personally chosen signifier. Additionally, claims of Irish-language acquisition linked (arguably in fetishised or tokenistic manner) rebellious republicans from the old IRA with those who swelled its Provisional ranks five decades later. This origin myth generated an “invented tradition” of an iconic, subversive Irish passed down decades behind bars.

This book concludes: “language is too powerful a tool not to be political”. Despite the cross-border and post-GFA efforts to ease Irish out of its Northern and republican contexts, this study argues for the potency of Jailic. For, spawned under repression, it reclaims and appropriates by “strength, power, and dominance”. Language endures against oppression and occupation. Symbolically, Jailic stands for Irish resistance.