by Teresa Prudente. This text may be archived and redistributed both in electronic form and in hard copy, provided that the author and journal are properly cited and no fee is charged for access. 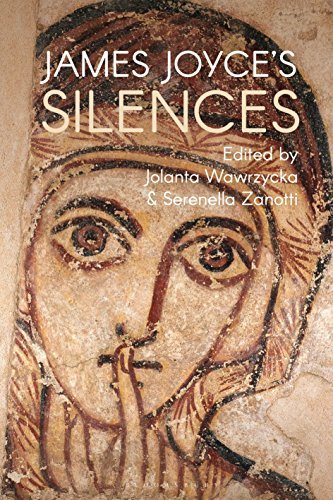 As suggested by the plural in the title, silence in Joyce takes the form in this volume of a web of different interweaving directions, both in terms of content and methodologies, as the entire range of the Joycean corpus is here explored, and silence is interpreted and analysed from different perspectives. This is evident from the opening essay by Fritz Senn, where silence in Joyce is deconstructed via the analytical disentangling of instances that point to many interlacing directions and functions, including the rhetorical, epiphanic, and evasive. Senn offers a poignant conceptual catalogue which provides a solid scaffolding for the inquiries developed in the following essays. His essay also sets the textual ground for considering the tension of opposite forces animating Joyce’s rhetoric of silence, especially those between emptiness/presence and activity/passivity.

The dynamics between staging and stating silence are explored by Rosa Maria Bollettieri-Bosinelli and Ira Torresi, who reflect on how Joyce exploits theatrical forms in his writing in order to fully deploy the epiphanic effects of silence. Quoting instances from Dubliners, Epiphanies, Stephen Hero and Ulysses, the authors point out how silence claims the scene and becomes visible and audible with implications that relate it to the taboo discourse of death. The idea of silencing the unspeakable as a way of making it more present and effective is explored in further essays in the volume. Forms and implications of the unsaid are explored in relation to the many semantic areas as well as narrative and linguistic forms they acquire in Joyce. Morris Beja provides a set of instances from the Joycean corpus relating silence to scorn and “separation, distance, aloneness, indifference, desperation, exile” (115). In Laura Pelaschiar’s essay, instead, the unsaid is explored in its political implications with reference to the silencing of the female voice: the author’s point is in line with the previously mentioned idea that Joyce’s focus on silence is able to make the unsaid/untellable even more present and audible than what is told. This is argued by Pelaschiar via the textual genetic analysis of Joyce’s revision of his first short story, “The Sisters”, where the writer “discovers and expands the potential of the rhetoric of silence” (35) in relation to the female subject. A complementary perspective on Joyce’s politics of silence is proposed by Teresa Caneda Cabrera, who interprets silence in “The Dead” as a technique calling attention to the unsayable, read this time in relation to the Irish historical and political context and, especially, to the Joycean focus on the feeling of foreignness. Silence, that operates in the short story by “evading complete articulation and withholding voice” (95), becomes thus an aesthetic and narrative instrument pointing at the unsayable aspects of Irish culture, history and society, but also, more broadly, at the potentiality of literature to give voice to estrangement, isolation and displacement. The focus on aesthetics, exploring the nexus between content and form, is at the centre also of John McCourt’s analysis, which traces the development of Joyce’s style from Giacomo Joyce to Ulysses by following the multiform role played by silence in the process, especially in relation to its opposite, noise, and to alternative forms of expression such as gesture.

Joyce’s language of silence is the object of Sam Slote’s analysis of the “Penelope” chapter in Ulysses in relation to Beckett’s dynamics of affirmation and negation in The Unnamable and How It Is. Slote’s internal deconstruction of Molly’s yeses shows how in the chapter they perform a range of functions, from semantic to syntactic, that “indicate the copula of continuing discourse” (109) in a writing process where “every step taken is also a step retracted: the path forward is aporetic” (110). Forms of affirmation in Joyce and Beckett can thus be read as affirmations of inability, “a great Yes to death” (112) that simultaneously encapsulates negation. The implications of Joyce’s focus on the dynamics of language and silence is at the centre also of Laurent Milesi’s dense essay, that links the discourse of silence to that on the origin of language, seeing silence as return: the silence “from which language arose and to which is condemned to revert” (63). By dwelling deep under the surface of Finnegans Wake’s Babelic form, Milesi argues for silence as an essential constituent of language – and the language of Joyce. This is proved by how some of the Wake’s main topoi point at the close connection between silence and origin, in the form of a lost and legendary source (the quest over the origin of Nile, the possible reference to the mythological river Alpheus) which, in a Blanchotian reading, brings language back to confrontation with its most essential aporia: the perpetual challenge against ineffability.

While some essays in the volume approach silence in a more indirect way – William Brockman’s analysis of Joyce’s dictated letters, where the writer’s voice, mixed with those of the amanuenses, is allowed silence and thus less responsibility, and Sara Sullam’s analysis of how the history of the Italian publication of Joyce’s critical writings, retraced in the publishers’ archives, shows that Joyce was “silenced” by censorship – Tim Conley’s essay brings the discourse back to the nexus between language and silence, while also serving as a bridge to the section devoted to translation. Conley starts from the polysemy of translation – with reference to the different translations provided, in English and further languages, to periphron, the Greek adjective qualifying Penelope in the Odyssey, to argue for the various forms in which Molly Bloom’s language is “translated” in Ulysses. Within the context of Conley’s point – that Ulysses works as a translation of the Odyssey – the multiform textual construction of the feminine voice in the novel shows Joyce’s attempt of “translating” silence via a set of strategies, such as onomatopoeia and idiosyncratic punctuation, that deconstruct stereotyped assumption on women’s language to show “the eternal feminine as an ever-imminent moment of communication, a way of speaking without spoken words, a way of speaking beyond death, in a silence of one’s own” (164). The relationship between silence and translation is then approached in three essays that show different takes on the subject. Serenella Zanotti focuses on silent translations: the Italian versions provided by Joyce in his early critical writings when quoting from the English of other authors and critics. Arguing for transformations that make the translations more than instrumental, Zanotti shows how silent translation works in Ulysses, especially in relation to references to Dante, and sets itself as one of the most pervasive features of Joyce’s building of complex intertextual webs. Jolanta Wawrzycka’s essay provides a foundation and examples for her translation into Polish of the poems of Chambers Music, explaining how her work was guided by the “translational philosophy of literary relanguaging that proposes, after Ingarden, to preserve all layers of a work of art” (196). Focussing on the poems’ phonemic structures, and the ways they point to silence, the author offers an analysis of her translation choices in the context also of a previous Polish translation as well as two Italian translations. A similar attention to the sound-sense element characterises Erika Mihálycsa’s analysis of music and silence in Ulysses via the examination of two Italian and one Hungarian translations of the novel. Focussing especially on how translation confronts the aural quality of the Sirens episode, Mihálycsa argues for silence as an essential constituent of translation, in light of the fact that “a deliberate stopping short of mediation, of the transfer of meaning, is a gesture that provokes translation and faces it with its limit” (225). The coda of the volume is an essay by Franca Ruggieri which sets Joyce’s poetics of silence in the context of the Modernist experimentation and cultural revolution, seeing the work of Joyce, as well as that of Conrad, Eliot and Kafka, as examples of how Modernism approached silence as a “multifarious associations of ideas, metaphors, and oxymora” (233).

As it is evident from this overview, richness of stimuli and suggestions, as well as textual cues and evidences, characterise this volume, which proves a fascinating and useful reading for Joycean scholars, although the same richness may also prove a limitation, as one might wish, in some cases, that some of the contributors had more space in which to fully develop their arguments. Nonetheless, the wealth of approaches and textual interpretations offered by the volume provide a platform in the field of Joycean studies that may give rise to further investigations.