by Bertrand Cardin. This text may be archived and redistributed both in electronic form and in hard copy, provided that the author and journal are properly cited and no fee is charged for access. 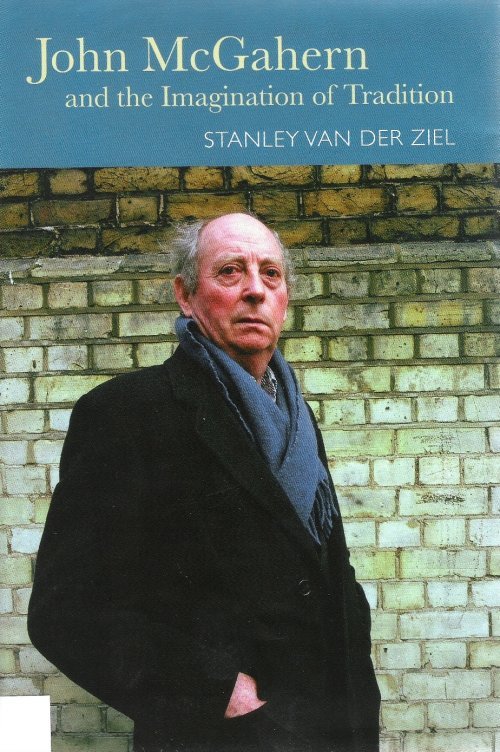 In this book, Stanley van der Ziel examines how John McGahern’s imagination was informed by his extensive reading of and thinking about classic literature. He aims to elucidate how the aesthetic principles and ideas the Irish writer found in the authors he admired are reflected in his own fiction. McGahern’s imagination is here considered as deeply “traditional” because his work is part of a larger tradition that is, according to van der Ziel, “a potential for progression and growth”, and part of a long chain of literary continuity that “must always be renewed”. McGahern reshapes tradition in his own image, and casts new light on the works that come before, but also after him. As the introduction of the book puts it, a truly “traditional” writer uses the lessons from the past “to shape a body of work that is so unique and individual that it forces future writers to take renewed stock of the shape and the values of the tradition”.

For McGahern, writing was a form of dialogue with all the great authors who had come before him. He was fond of repeating W. H. Auden’s description of the writer’s relationship to his forebears: “breaking bread with the dead”. In an essay, he wrote that “To continually break bread with such company is almost as necessary for our spiritual lives as plain bread is for our daily sustenance”.

The purpose of this book is not to identify quotes from other books – which would be difficult for there are few of them – but to isolate and comment upon some of the major ideas McGahern took from his eminent predecessors. It demonstrates how his fictional oeuvre can be read in the light of various literary traditions within which it operates. In a way, this book is a history of literary and aesthetic ideas reflected through the eyes of one particular “solitary reader” who happened to become a writer. The latter developed his artistic vocation in the 1940s: at the age of ten, the young John McGahern had free access to the private library of his Protestant neighbours, Mr Moroney and his son. Thus he could read hundreds of books and consolidate his classical education, a life-changing experience. McGahern would never have become a writer without this opportunity.

The book is divided thematically and chronologically. It is made of chapters which look in detail at the main ideas McGahern borrowed and adapted from some of the Irish, English and European authors whom he most admired, and whose stamp can be discerned on his own thinking and conception of literature. Each chapter makes reference to relevant aspects in the work of authors from different historical periods – English Romantic poets, Victorian novelists, modernist writers or Post-war philosophers. Of course, the chapter about Yeats and Joyce, which includes more examples than others, is particularly fascinating. Likewise, McGahern’s intimate connections with Shakespeare, Proust or Beckett are very stimulating.

Some of these analogies are quite convincing, particularly when they are explicitly acknowledged, and probably intentionally introduced by McGahern in his prose – many examples are borrowed from Proust’s In Search of Lost Time or T. S. Eliot’s Four Quartets. Some others are just vague allusions and are thus more debatable. By definition, the allusion is implicit, suggestive, more or less detectable and its perception is often subjective. Indeed it depends much more on the reader’s shrewdness than any other intertextual practices: it can go unnoticed and can also be suspected where nothing is alluded to. Van der Ziel makes rapprochements from clues which can be considered as questionable. Besides, he is very much aware of his subjective approach, as he proves to be very careful in his interpretation: “the title of the story may contain, the allusion seems to recall…” (199).

It would have been worth wondering if the intertextual connections in McGahern’s work are intentional, if the writer is aware of them, and if the substitutes – the intention of the work and the intention of the reader – are valid and relevant as regards textual interpretation. It is regrettable that the concept of intentionality is never really dealt with here. Similarly, the distinction between the notions of “influence” and “intertextuality” is not developed, but only referred to incidentally in an endnote (note 45, page 248), which may be considered insufficient by some. In view of the general topic of the book, a more theoretical discourse was expected.

In addition, as McGahern is here presented as a link in a long chain of prose writers, his influence on the following generation of Irish authors could have been further analyzed. Indeed some echoes of his work are clearly detectable in the fiction of Colm Tóibín, Colum McCann or Claire Keegan. McGahern’s place in a long continuing tradition could have been more clearly highlighted. A whole chapter would have given convincing examples, and would have opened up new and extensive research areas. Instead, only one and a half pages in the epilogue refers to his literary heirs.

These reservations notwithstanding, John McGahern and the Imagination of Tradition is a most valuable contribution to the critical apparatus about McGahern’s literary production. It also deserves credit for enhancing an original aspect of the work that has been left uncharted so far. Doubtless, van der Ziel’s book fills in a gap. Besides, it gives readers the opportunity to take a fresh look at McGahern’s prose and to arouse in them a fertile reflection on all forms of interaction.