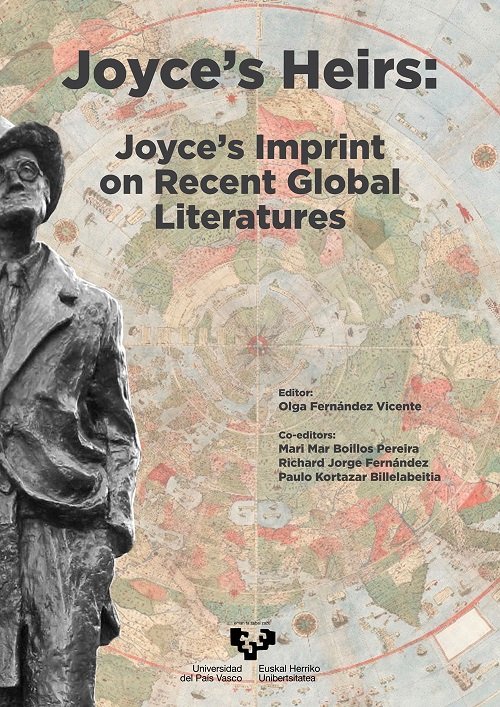 James Joyce’s literary work and figure continues to exert influence upon writers, academics and readers all over the world, and Spain is not an exception. Joyce’s Heirs is a recent instance of the continuing interest of Spanish scholars and writers in the Irish genius, as it is also the case of the special edition of the Revista de Literatura etc that has also dedicated its 21 issue, coordinated by Juan Gavilán, to Joyce (2019). The collection of essays edited by Olga Fernández Vicente includes the contributions of well-known specialists on Joyce and on Irish literature, as well as the research of young scholars who guarantee the future of Irish and Joycean studies in Spain.

Supported by the Research Group LAIDA (Literatura eta Identitatea Ikerke ta Taldea), coordinated by prestigious literary critic and writer Jon Kortazar Uriarte, the volume begins with the chapter “‘Joyce Is My Man’: Kate O’Brien and James Joyce” by Ainizane Legarreta Mentxaka, an expert on Kate O’Brien, who offers a most interesting and well-documented discussion and comparison between Joyce’s topics and aesthetics and Kate O’Brien’s, in relation to issues such as nationhood, politics and religion. After establishing what she calls common ground, Legarreta Mentxaka proceeds to detect intertexual links between O’Brien’s The Land of Spices and A Portrait of the Artist as a Young Man, and Mary Lavelle and Ulysses, focusing respectively on the protagonists’ education in the first case, and on the topic of flânerie in the second. Particularly interesting is the author’s attention to O’Brien’s modernist style as well as her vindication of the formal interest of the Irish writer’s work which contrasts with the more abundant studies that tend to focus on O’Brien’s thematic concerns in detriment of aesthetics.

Legarreta Mentxaka’s chapter is followed by Olga Fernández Vicente’s reflection on how Joyce surpassed modernist aesthetics and interests, so that, perhaps, placing Fernández Vicente’s piece beforehand could have more opportunely framed the comparative study between Joyce and O’Brien. It should be added that any study of Joyce’s modernist aesthetics, and this applies to the two contributions, must necessarily take into consideration the still unsurpassed contribution by Weldon Thornton, The Antimodernism of Joyce’s “A Portrait of the Artist as a Young Man” (1994).

The next three chapters of Joyce’s Heirs try to establish connections between the Irish genius and predecessors from Irish literature such as Bram Stoker and Charles Maturin, and, more surprisingly, relate Joyce with popular works such as the Harry Potter Series.

Therefore, Richard Jorge proposes in “‘Baleful distractions’: the female body in James Joyce’s ‘The Dead’ and Bram Stoker’s ‘The Coming Home of Abel Behenna’” a quite unexpected comparative analysis of the uses of female figures in Irish literature in relation to colonial and postcolonial contexts and images that he illustrates with a tale by Bram Stoker and with Joyce’s most accomplished short story. Jorge’s attempt is certainly a difficult one since he is comparing a one-dimensional even secondary character, Sarah Trefusis, from Stoker’s “The Coming Home of Abel Behanna” with the more complex, multidimensional and controversial portraits of the Misses Morkan, Miss Ivors, and Gretta Conroy, forgetting the author the also meaningful presence of Lily at the beginning of Joyce’s “The Dead”.

In a similar line, Charlie Jorge delves on Northrop Frye’s theories on literary archetypes and, in particular, on the Great Mother or Great Goddess Archetype as formulated by Eric Neumann, as a critical context for his analysis of the mother figure in Joyce’s “The Boarding House” and in the “Tale of the Indians” included in Charles Robert Maturin’s novel Melmoth the Wanderer. As the title of the contribution announces (“The Terrible Mother Archetype in James Joyce’s ‘The Boarding House’ and Charles Maturin’s Melmoth the Wanderer”), he is going to highlight the negative attributes of the previously mentioned archetype that he allegedly identifies in the portraits of both Mrs Mooney and Donna Clara. Despite the author’s efforts, sometimes it seems that the characters do not easily fit in the archetype, most particularly in the case of Joyce’s much critically debated characterisation of his female protagonist.

It is always tempting to study topics such as the representation and function of female figures in Joyce’s work, or topics such as the Irish writer’s treatment of motherhood or fatherhood in comparison with other authors, and Nerea Unda’s piece “‘The father without a son be not a father, can the son who has not a father be a son?’: The Quest for Paternity in Ulysses and Harry Potter” is a further instance of this kind of studies in Joyce’s Heirs. Notwithstanding, critics opting for such analyses must always try to, first, take into account the literature previously written on the topic (which in Joyce’s case is over abundant) and, second, to make sure that there is real ground for the establishment of confluences. Joycean critics have carried out a Herculean effort to revise initial simplifications and even misconceptions detected in early studies of the Irish writer’s works, and this has been particularly the case with feminist and gender analyses which have fortunately proliferated since the late 1980s, and whose main objective has been precisely to deploy the complex, multidimensional and antiessentialist nature of Joyce’s portraits of male and female characters. This is precisely one of the most challenging aspects when studying Joyce’s processes of characterisation, since the Irish genius managed to represent male and female figures that usually defy any attempt at encapsulation, even at an early stage in his literary career.

The two contributions centered on Finnegans Wake included in the volume are of undeniable interest for Joycean studies and provide further knowledge on Joyce’s process of composition of his book. Ricardo Navarrete Franco, the most salient especialist in Spain in the last work of the Irish author, offers a carefully detailed piece of genetic criticism in his chapter “The Book of the Dead in Finnegans Wake: An Approach Through Joyce’s Late Additions”. Navarrete Franco demonstrates how focusing on the later additions from The Book of the Dead that Joyce incorporated in 1936 and 1937 helps us to understand the extent to which The Book of the Dead is present in Finnegans Wake. Navarrete convincingly reaches the conclusion that, in contrast with Christian beliefs that emphasise the spirit in the afterlife, Joyce understands resurrection as resurrection of the body and illustrates how his careful study of those passages that the Irish writer borrowed from the Egyptian ritual allows him to conclude that Joyce associated ressurection with Earwicker, and with a process that involves “listening to a voice, receiving a Kiss, beating of the heart, looking up, opening the mouth, breathing, speaking, walking and the restoration of the penis”, that is, “to stay with the body, to be able to eat, and drink, and dance, and jump” (102).

Similarly well-documented and skilfully argued is Macarena Martín Martínez’s vindication of Joyce’s use of the Catholic Mass in the fable of “The Ondt and the Gracehoper”. After revising previous interpretations of the fable, Martín proceeds to identify multiple Christian motifs and values and even demonstrates how the most important rites of the Catholic Mass can be identified throughout the fable, such as the Penitential Rite, the Gloria, the Deo Gratias, the proclamation of the Gospel, the Homily, the Rite of Peace, the Profession of Faith, the Liturgy of the Eucharist, the Consecration, the Lord’s Prayer, the Holy Communion and the Concluding Rites. Macarena Martín does not fail to detect changes in content as well as in order which nevertheless are not as radical and complete as to consider that Joyce was invoking a Black Mass. Furthermore, the rigour of Martín’s genetic study leads her to conclude that, since Joyce added the references to the Mass after the composition of the fable, these allusions, rather than serving as a structural element, were used by the Irish author as further formal and thematic overall support to the fable.

The two genetic studies of Joyce’s Finnegans Wake are followed by Guillermina Heredia Campos’s contribution that, after trying to distinguish conceptually between superstitions and beliefs, proceeds to identify them in Joyce’s Ulysses in “Learning about Superstitions and Irish Beliefs Through Ulysses”, and thus she refers to the particular meaning that, following Don Gifford, Joyce associated with certain colours, numbers, days, objects, charms and amulets, etc.

Joyce’s Heirs also includes a most interesting interview with Xabier Olarra, the translator of Ulysses into Basque (2015). Olarra, led by the interviewer Olga Fernández, reflects on the difficulties of the translation, especially taking into account the peculiarities of the pre-Indo-European Basque language, and comments on how he managed to deal with many of the stylistic challenges of Joyce’s masterpiece.

As can be deduced from the previous lines, and it is usually the case in this type of collections, some chapters contribute more than others to the advancement of knowledge in Joycean studies, having some of the analyses a more divulgative nature, which should not necessarily be discarded, since each of them appeals to different readers with diverse interests.

Since the volume already contains an introduction in which the contributions included are explained, one finds it unnecessary the inclusion of abstracts preceding each chapter, as well as the key words. Overall, the editing of the essays can be certainly improved, especially if it is to appear in paper format in the future. Furthermore, its present condition in electronic form allows for an easy mending of some limitations such as the absence of information on contributors, or some inconsistencies in style. Finally, given the fact that the Basque language is a minority language, it would be equally interesting to include in the future a bilingual version of the last contribution by Joxe Mari Iturralde which, despite being entitled “Joyceday” appears only in Basque, something that prevents most of us from grasping the impact of Joyce’s figure on the great Basque creator.