by Verónica Membrive-Pérez. This text may be archived and redistributed both in electronic form and in hard copy, provided that the author and journal are properly cited and no fee is charged for access. 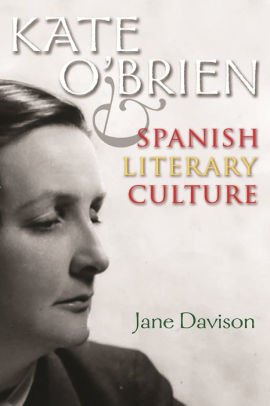 The publication of a special issue of the journal Irish University Review devoted to Kate O’Brien, together with the online broadcast of poet and editor John Gawsworth’s BBC 1970 short documentary which contains valuable footage of the Limerick writer, leads to the assumption that there is still much to be explored about O’Brien and her literary production. Kate O’Brien and Spanish Literary Culture by Jane Davison supports this perception since it certainly puts forward an original and previously neglected approach to the works of the Irish writer. Kate O’Brien’s conception of Ireland in her fiction is inextricably linked with her experience abroad, particularly in Spain, and this space would become her locus of cosmopolitanism to the same extent that Paris, London or Trieste would be for Beckett, Bowen and Joyce respectively, who left Ireland “to live and work in capital cities of international modernism” (Pearson 2). In all cases, their discourse of cosmopolitanism was never separated from their assessment and reassessment of the turbulent establishment of the Irish Free State and the resulting paralysis of the Irish cultural scene. Certainly, Kate O’Brien’s relationship with Spain has been studied from several perspectives. Researchers such as Lorna Reynolds, Adele Dalsimier, Eibhear Walshe, Aintzane Legarreta Mentxaka, and Ute Mittermaier have underscored the importance to O’Brien’s fiction of her Iberian experience during the 1920s and 1930s, and especially her time in Bilbao. Her novels Mary Lavelle (1936) and That Lady (1946) are set in Spain and her love for the country also resulted in the publication of the travel journal Farewell Spain (1937), just after the outbreak of the Spanish Civil War. In this monograph, based on her PhD dissertation, Davison delves into specific Spanish authors’ plays, fiction, and even letters as a conduit to a detailed exploration of O’Brien’s influences from Spanish at that time, but as far back as the 16th century. In particular, the book offers a comprehensive comparative analysis of her writings with that of influential Spanish writers Jacinto Benavente (1866-1954), Miguel de Cervantes (1547-1616) and Catholic mystic Saint Teresa of Avila (1515-1582).

The first chapter focuses on the examination of Benavente’s plays of the turn of the 20th century in relation to O’Brien’s novels Without my Cloak (1931) and That Lady (1946). Davison’s selection of Benavente’s plays El Hombrecito (1903) and Princesa Bebé (1906) is apt for the purpose of this research because both the novels and the plays are concerned with the struggles of women with morality and individuality and contain insight into societal views of “the function of marriage and family, morality and duty versus desire” (45). This chapter illuminatingly aligns Benavente’s fictional characters Nené and Princess Helena with O’Brien’s Denis, Caroline and historical figure Ana de Mendoza, as rebellious women who defy or challenge the moral code of their social class, thus drawing a connection between O’Brien’s Mellick (her fictional rendering of her home place, Limerick) and Benavente’s Spain from a female perspective in terms of the inequality and discrimination rife in both places. The Spanish Nobel Prize winner was one of the few writers from the Generation of ’98 who wanted to promote Spain’s place in the world after the loss of its glorious imperial past. This study suggests that O’Brien’s link with Benavente came from her interest in becoming a playwright at the beginning of her career and also from her contact with the Starkie family, in particular from her alleged personal relationship with Enid and her brother, the Hispanist Walter Starkie, who published a dissertation on Benavente in 1924. Davison explores Walter Starkie’s promotion of the Nobel Prize winner’s plays in Ireland during his years as the director of the Abbey Theatre (1927-1942), and the utter rejection by The Abbey of any foreign influences in the cultural environment of the Free State. Starkie would become another Irish writer who, like O’Brien, was fascinated by Spain and who travelled back and forth to the country until his death in 1976. Although Davison’s comparative analysis is enlightening, a more thorough research of O’Brien’s debut play Distinguished Villa: A Play in Three Acts (1926), which is briefly mentioned, would have been very revealing, considering the author’s recurring concern with the “behavioural norms and sexual predilections of the English middle-classes, and her early awareness of the requirements of the British censor” (Moran 7).

Chapter 2 elaborates on the influence of the most prominent work in the Spanish language, Cervantes’s Don Quixote, mainly on O’Brien’s novels Mary Lavelle (1936) and Pray for the Wanderer (1938). Through a detailed analysis of several main and secondary characters, Davison profiles the multifaceted reception of Cervantes’s chivalric novel on O’Brien’s aesthetic development and her relationship with the literary stagnation that was taking place in her native country. Of particular interest is Davison’s aim to establish a correlation between Cervantes and O’Brien’s shared Erasmian concept of interiority and individuality, as well as their witty and sharp approach to escape censorship through the enactment of oblique references to the issues considered subversive during both the 16th century and the first decades of the 20th century in De Valera’s Ireland. O’Brien experienced the banning of Mary Lavelle, so she would have searched for a new means of circumventing the Irish Censorship Board when writing her next novel, Pray for the Wanderer, published two years later. She wanted to give the impression of having “learned the lesson” derived from the 1937 Constitution through the character of Una by outlining the embodiment of the docile, innocent female character meant for domestic life that was expected in independent Ireland.

The last section of this book focuses on the figure of the mystic and writer Saint Teresa of Avila, whose writings permeated O’Brien’s whole literary production, to the point that the Irish writer published a study of the saint in 1951. As the chapter progresses, it is revealed how O’Brien’s female characters, especially in The Flower of May (1953) and That Lady (1946), are coded in order to be given a sense of “self-government and individualism that was denied to the female citizens of Éamon de Valera’s Ireland” (110), and were clearly influenced by the controversial reformer of the Carmelite Order and her interpretation as an representative figure for lesbianism and feminism. As was the case with Cervantes, Teresa of Avila also influenced O’Brien through the avoidance of obvious references to taboo topics, preferring the use of subtextual meanings instead. Considering O’Brien’s utter rejection of Ireland’s parochialism and exacerbated promotion of the national myths that permeated all social and cultural spheres after the country finally accomplished its independence, it is certainly not unusual that the Irish writer declared her condemnation of Franco’s regime in her travel journal published just after the outbreak of the Civil War. O’Brien preferred Spanish Catholicism to that of the Irish variety because it was totally opposed to puritanism being established in her home country, although after Spain’s Civil War that version of Catholicism which O’Brien admired would become a thing of the past.

In sum, this study reinforces the impact that O’Brien’s formative period in Spain in the 1920s and 1930s had on her works and Davison’s perspective bursts with originality. Considering that there is a continuing need to reassess O’Brien’s status within the Irish literary canon, this book proves invaluable in contributing to our understanding of the Irish writer’s struggles to be heard, to bear witness, and to preserve her personal freedom while describing the social, political and cultural atmosphere of both Ireland and Spain. It could be asserted that Kate O’Brien has been well served by this scholarly monograph.