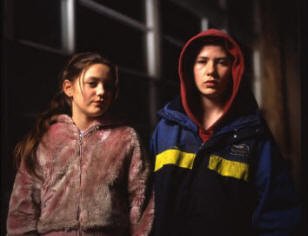 By the time the national run of Lance Daly’s well-received third feature, Kisses, had wound down, it seemed that more people knew about the off-set behaviour of the two juvenile leads, Kelly O’Neill (as Kelly) and Shane Curry (Dylan) than were familiar with their on-screen personae. Given their respective ages of 12 and 13, we are not dealing with Hollywood excess, rather a disconcerting injection of reality into the demure environment of low-budget Irish cinema. As Irish Times journalist, Eoin Butler, described it, while he was clearing his throat for some openers, all-out war was breaking out opposite him: ‘Kelly O’Neill is straddling Shane Curry and raining a series of blows down on his head. Curry is retaliating in kind, loudly accusing his leading lady of being a “doody-headed nincompoop” (although my Dictaphone has been known to be a little bit erratic and those might not be the precise words he uses).’1 Pat Kenny, the urbane host of RTÉ’s popular primetime television chat show, The Late, Late Show had his work cut out to coax a few warm memories about their experience from Kisses’ two leads, who did concede that Daly’s production wasn’t as bad as most Irish films.2

The disjuncture between the reality of pre- and early teen behaviour, and adult investment in an ideal of childhood innocence creates a friction at the heart of Daly’s film that, at its most productive, prevents it from succumbing to mawkishness. At the outset, the film appears to hark back to the tough inner-city dramas of earlier generations, such as Joe Comerford’s Down the Corner (1977) or a less performative Roddy Doyle. In two neighbouring homes, Dylan finds himself the object of his abusive father’s rage while Kelly returns from taking the baby out in the pram to encounter her uncle, whom we shortly realise sexually abuses her, dispensing Christmas largesse. After Kelly’s efforts to rescue Dylan cause mayhem, the two decide to run away from home, a decision boosted by Kelly’s pocketful of ill-gained cash.

Switching from monochrome to colour, the film proceeds to guide its two leads through a series of adventures, starting with their voyage down the canal on a barge navigated by a new immigrant (Spanish actor, David Bendito). From him, they learn that Dylan has a famous namesake, a singer of whom neither had heard. And so another strand is introduced, one that will culminate in a cameo appearance by Stephen Rea as a somewhat menacing Dylan tribute artist.

It’s hard to watch a cinematic barge trip without recalling Vigo’s L’Atalante and, although the comparisons are modest, this is the film’s most magical sequence and where it most clearly departs from its aesthetic of social realism. Kelly flirts with abandon with their unnamed guardian while Shane is more reluctant to let himself go. Bendito’s bargee is one of several new immigrants — the next is a busker and another a warm-hearted young African woman, who act as tarnished guardian angels to the children. Here, it seems, Daly is taking a lead from a sequence in Perry Ogden’s Pavee Lackeen (2005), where the eponymous Traveller Girl (Winnie Maughan) wanders through inner city Dublin’s new ethnic streets, and encounters little of the prejudice that she might expect to meet in the old Ireland.

The new immigrants replace the children’s own flawed families, briefly providing them with moments of comfort before each encounter reaches its end. Nor does Shane’s older brother ever materialise; at first they plan to bunk in on him but all they find out about his whereabouts is that he has been sleeping rough on the streets and that he has a drugs habit. The children’s only significant encounter with their fellow countrymen is when a gang attempts to kidnap Kelly.

As the film takes us through the night, so our extra-diegetic knowledge of the fate of Dublin’s street children warns us against trusting that the fairytale will last. According to his custom, Daly plays it out just a little too long before bringing his narrative to a hesitating conclusion.

Kisses suffered from an excess of hype (no, it wasn’t the new Once) that reflects Irish film culture’s desperate search for a hit. What is most interesting about Daly’s production is how it inserts itself into a continuum of representations of Irish childhood. We could take this back as far as the street kids who haunt James Mason’s dying IRA man in Odd Man Out (1947), and forward through the Traveller brothers at the heart of Into the West (1992) to Francie Brady in The Butcher Boy (1997). In their different ways, these children represent a force that is both disruptive and creative, one that highlights the lethargy of the surrounding community.

Carol Reed, in Odd Man Out, cast real street children to produce the mocking gangs who taunt the RIC while celebrating Johnny (Mason)’s rebel persona. In the later two films, the children are actors (if in both cases, intense and talented) and their roles are more clearly staged. Their narrative function is less to remind us of ‘real’ youngsters than to function as symbolic emissaries. In this they more closely resemble another child performance in Odd Man Out, that of the young girl, the angel, who appears to Johnny as he hides out in the underground cellar. She is the first of a series of harbingers of his impending death, a silent reminder, through her innocence, of his guilt. In the fairytale that is Into the West, the significance of the two brothers is as guides to the adults so that they may complete their own psychological journey. Francie Brady, on the other hand, is the first truly traumatized child of Irish cinema. His is a psyche that is so damaged by his environment that he can neither save or be saved.

Daly’s Kelly and Dylan are thus inheritors of a dual tradition, drawing from neo-realist practices of casting children off the street whose performances will imbue the film with spontaneity, and of interpolating children into the narrative as bearers of a symbolic innocence. The question then is, can they save the adult community from its own corrupted values? Or is this the story’s intent?

In many ways, Kisses recalls Into the West; however in the earlier film, the two child protagonists had to abandon the derelict space of the suburbs for the Celtic magic promised by the West. In Kisses, the suburbs are just as compromised, though imagined more as they were in, say, Roddy Doyle/Michael Winterbottom’sFamily (1994), as low-rise, poorly maintained housing built around common spaces that mock the urban planners’ ideal of the village green. Families live too close together, replacing neighbourliness with nosiness, and affection with incest. A passing gaggle of schoolgirls taunts Kelly for not having sex with Dylan, the latter hides in a cupboard when his father comes roaring after him and only escapes from him through a bathroom window when Kelly comes to his rescue with a ladder. There is little new in this representation of the city’s working class outer-ring; where Daly does inject an element of novelty is in creating a sanctuary for the twosome in Dublin’s shopping precincts and inner city areas. Shot while the Celtic Tiger was still the driving force in Irish culture, Kisses suggests that access to consumption is a valid if temporary panacea for social exclusion. The children purchase themselves new outfits, ‘wheelies’, and a new, ‘hardman’ haircut for Dylan. Inevitably, thereafter, they are forced to rob food and, finally, to sleep on the street. Before that they are granted one more magical moment, as they skate on the ice-rink in Smithfield.

This is an economy fuelled by consumption — the migrants they encounter, selling goods or busking, are reliant on it, while the African woman appears to be selling herself. This too, would, we must assume, have been the fate of Kelly, had the gang succeeded in abducting her. The fact that the film is set during the Christmas season only serves to underline this theme.

Kisses’ reluctance to critique the Celtic Tiger economy, represented here as vaguely enabling, distinguishes it from most other recent Irish film productions. It is, as I have said, warm towards the new immigrants who are seen to have displaced the local Irish as the protectors of children and guarantors of moral values. Somehow, Dylan and Kelly are victims of their own society, although Daly is apparently unwilling to spell out what he means. From the outset of the film, it is simply a given that the indigenous white Irish working class is characterized by male brutality and an ineffectual female support structure. The state remains unrepresented until the belated arrival of the Gardaí (police) at the end, as does the Church. Apparently, these people are on their own with their dysfunctional families; their living conditions are perhaps to blame (or are they to blame for their living conditions?). Even when they escape, as has Dylan’s brother, Barry, they do not have the resources to survive. When Dylan and Kelly do return from Oz to their monochrome world, it is hard to determine how we are expected to view their decision – inevitable? flawed? auspicious? Will their overweight, poorly dressed mothers now step up to the mark and create the nurturing domestic environment that will allow these children to enjoy their childhoods, or will all return to its former dismal state?

Dense plotting has never been Daly’s strongest card and although Kisses is this director’s most sophisticated work to date, there is something unsatisfying in his reliance on imagery to carry the narrative. Specifically, his selection of images and his recycling of filmic references (Variety could name check anything from The Night of the Hunter (1955) to Disco Pigs (2001);3 creates a collage of eclectic and unanchored signifiers. The film is short (a running time of 72 mins) and this adds to a sense of flimsiness. The Bob Dylan subtheme is never adequately integrated into the main body of the narrative; as much as (Bob) Dylan’s lyrics celebrate taking to the road and cutting free from settled culture, so Daly’s partial subscription to an aesthetics of realism refutes this as a working model for the two children. Stephen Rea’s cameo is equally under-developed and somewhat pointless.

What rescues the film are the children’s performances.  Kelly O’Neill and Shane Curry are fractious and edgy throughout — the opposite of those cutesy little dolls so beloved of Hollywood  —  and even their brief romantic interlude is executed with perfunctory attention. When they discover that they have been sharing their cardboard overnight accommodation with a dead street person, their horror is so undisguised that I wondered how much or little the director had prepared them for this narrative twist. They are very alive and very real (which is not to suggest for a moment that their own backgrounds reflect those of their fictional alter egos). Just as they burst out of the screen and into their interviewers’ environments, so they force the narrative to reverberate with a stubborn Dublin working-class energy. These children do no bespeak victimhood but resilience and a contempt for middle-class complacency. Had Daly drawn his narrative more from their qualities, rather than attempting to bend them to his narrative, he might have produced a more rounded, convincing film.