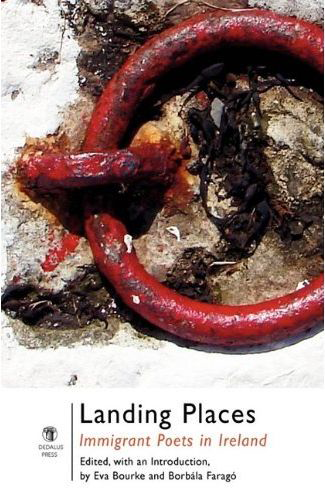 Sixty-Six is a Great Start

Last year saw the publication of Ten New Poets: Spread the Word, an anthology of black and Asian poetry, edited by Bernardine Evaristo and Daljit Nagra, to reflect the multicultural dimension of contemporary Britain. The book was a response to the Free Verse report, which revealed that only 1% of the poetry books published in the UK were written by Asian or black poets. The figures are shocking enough, but if we take into account that they correspond to a country that has been racially diverse for generations they are even more alarming, and raise a lot of questions around the issues of representation, authorship and canon formation processes. If this is the situation in Britain, after reading Evaristo’s introduction toTen, “Why It Matters” (11-16), expectations of an ethnically and racially heterogeneous poetic landscape are not very high for a country such as Ireland, traditionally schooled in emigration and only recently itself the recipient of migrant communities. The anthology Landing Places: Immigrant Poets in Ireland is a good barometer to tackle this issue and has the merit of being the first volume entirely devoted to the poetry of the communities that have settled in Ireland in the last decades.

As the editors eloquently explain in their introduction, there have been several distinctive waves of immigration to Ireland (xx). However, the unprecedented economic success of the Tiger years resulted in an important increase in the number of migrants, to the point that it looked as if immigration was a completely new phenomenon directly linked with the boom. This anthology puts together sixty-six poets that are diverse in their racial and ethnic identity, social extraction, writing experience, age, thematic preferences and moment of arrival in Ireland. The volume thus reflects the varied human landscape of modern Ireland while it contributes to counteracting the clichéd meaning of the term “immigrant”. There is a tendency to associate immigrants with asylum seekers, political refugees and economic migrants exclusively. Alternatively, we think of students and professional migrants as travellers or global citizens and, in his review of Landing Places, Dave Lordan uses the term “spiritual immigrants” for those who arrived in the 80s and 90s, mainly from continental Europe, Britain and the USA, looking for a rural Arcadia in the Emerald Isle. In Landing Places, however, students like Megan Buckley, and Kristina Camilleri appear side by side with Enrique Juncosa (director of the Irish Museum of Modern Art), Julia Piera (then director of the Cervantes Institute in Dublin) and Angolan-French poet Landa Wo, forced into exile and faced with the difficulties of finding a job in the receiving countries. The undesirable obliteration of difference within such a varied group is avoided by means of a small bio-bibliographical note preceding each poet’s work and shedding light on his/her singularity.

As is only to be expected in a book like this, the poems anthologised look at the experiences of loss, alienation, displacement and hope that characterise diasporic communities. However, the volume doesn’t work as a manual to understand “Otherness”, and offers instead multiple themes that surprise the reader: Oritsegbemi Emmanuel Jakpa’s “Harmattan” (73-4), for instance, is an imaginative revision of Seamus Heaney’s “Digging”, and Panchali Mukherji’s “Odysseus Today” (126-7) infuses Indian scents in a canonical myth that has shaped the collective psyche of Ireland for generations. There are reflections on illness and the loss of loved ones – as in Theodore Deppe’s “Guillemot” (48-9) or in Grace Well’s moving “The Dress” (210-11), to give but a few examples. Kinga Olszewska’s humorously dramatic “A Site for Sale” (144) tackles the thorny issues of integration and identity, and Nyaradzo Masunda’s “Walk My Walk” (108-9) invokes empathic responses on the part of the native inhabitants of the land that received her by means of a poetic mode based on repetition and African rhythms: “Before you walk my walk / Take my boots / Do you feel the tightness? / Do you feel the stones piercing through? / Do you feel the thorns? / This is the walk I walk” (108). Readers are thus presented with an anthology that does not aspire to represent the immigrant experience but the artistic sensibilities of poets that currently share the same geographical space. The poems of Irish-Indian Ursula Rani Sarma are a good illustration of this. The poet and playwright has often declared that it is not her intention to write about her “Indianness”, which is what many people expect her to do, given her hybrid origins. The editors of Landing Places have wisely avoided the mystification of the newcomers under the rubric of “authenticity” and have favoured poetic quality and heterogeneity instead. This is not surprising in a book edited by poets Eva Bourke and Borbála Faragó. Their poetic sensibilities as well as their knowledge of the immigrant experience from within have definitely shaped such an artistically challenging volume.

For many of the poets anthologised – originally from Britain or the USA – English is their mother tongue or has been their main means of communication for a long time. Therefore, most of the poems conform to a standard version of English. Only few of the authors flavour their texts with the unfamiliar structures of foreign languages. As a reader coming myself from a non-English speaking country, I would have liked to read more of these instances to assess the ways in which the varied linguistic communities that live in Ireland nowadays are leaving an impact on the English language and on the literary text. However, and as the editors contend, many of the recent immigrants are probably writing in their languages of origin by preference (xxi), and some, we may add, may be too busy making ends meet to engage in creative writing at all. I believe we will have to wait for at least ten more years before we witness a more heterogeneous linguistic landscape in the poetry published in Ireland. The anthology serves, however, as an interesting map to tackle the ways in which English is beginning to be altered imaginatively by the new communities. Researchers working in the field of Irish Studies could easily use this volume to analyse whether Hiberno-English, formerly marginalised as an inferior form of the supposedly superior R.P. English, may now be drawn to the centre of representation in the work of all these new voices or to examine the extent of adaptation to Irish-English on the part of poets coming from other anglophone environments.

Several of the poets included in Landing Places were already familiar to readers of poetry in Ireland. As Faragó contends, immigrant poets are not new to the poetic scene and approximately 20% of the names included in the “Contemporary Poetry” section of Field Day Vol. V “are immigrants or have mixed cultural backgrounds” (2008: 149). Although this is a figure to celebrate, the origins of these poets are often obliterated in such volumes in a process of assimilation to the national mainstream. The anthology here reviewed powerfully counteracts this dynamics. Publishing immigrant poets in a separate volume may be seen as a form of segregation, but at this precise moment, when immigrant writing is still a fairly new phenomenon, anthologies like Landing Places highlight the new creative energies of Ireland and their contribution to what is commonly referred to as “Irish poetry”. It is also a timely publication. With the end of the economic boom and the leaving of thousands of immigrants, the question that now remains to be answered is the nature of the consequences which it all may have for Irish writing. The anthology witnesses the beginnings of a more diverse poetic community right when a new change was looming on the horizon. Sixty-six is a good start and we can only hope the numbers are here to stay and grow.

In her thought-provoking A Small Place, Antiguan novelist Jamaica Kincaid writes that all human beings are dual in nature, all of us natives of somewhere and strangers somewhere else. It is only a matter of perspective, she maintains, to embody one or the other. Landing Places goes beyond the mere representation of the poetic voices of the others to make us pause and reflect on our own otherness, on our own dual character.

I wish to acknowledge my participation in the Research Projects FFI2009-08475/FILO and INCITE09 204127PR for the study of contemporary Irish and Galician women poets.