by Aimee Mollaghan. This text may be archived and redistributed both in electronic form and in hard copy, provided that the author and journal are properly cited and no fee is charged for access. 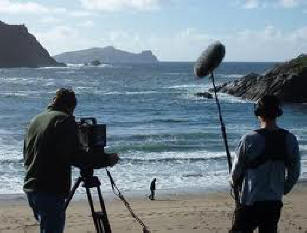 Given the complex relationship that the cinematic landscape has enjoyed in Irish cinema it is, perhaps, surprising that it has taken so long for a film to contend not only with its visual impression but also its acoustic properties. Blending fiction and documentary, Silence (2012) documents the fictional pilgrimage of Irish sound recordist Eoghan (Eoghan Mac Giolla Bhríde) from his adopted city of Berlin to his childhood home in Donegal as he attempts to capture the sonic signatures of the quietest places in Ireland, preserving them for future generations. By endeavouring to capture the sounds of an acoustic environment being steadily trespassed on by the noise of increasing industrialisation, Collins’ film weaves visual and sonic textures into a dense cinemascape in order to examine notions of nostalgia for a lost Ireland.  By not only confronting the Irish landscape and the weight of associated history, it also directly engages with the soundscape, allowing for an arresting psychogeographical journey through the contemporary rural landscape.

Landscape carries a certain cultural significance within Irish Cinema, offering itself up as a utopia or balm to the ills of modernity.  Martin McLoone posits that the iconography of landscape became symbolic of Ireland’s aspirations for nationhood, writing that Ireland’s cinematic landscape “perfectly encapsulates the way in which the West of Ireland now exists as kind of ideal regenerative environment for the trouble and worried kind of modernity” (McLoone, 2008: 95). Cultural critics such as David McWilliams have asserted that the Celtic Tiger years saw the Irish middle class essentially come to disavow their Irishness.  Tellingly when we first encounter Eoghan, he is living and working in Berlin and is reluctant to return to Ireland.  He is however, haunted throughout the film by the recurring image from what eventually transpires to be his childhood home.  Furthermore, as Ruth Barton points out, “Nostalgia for the past is often an unwillingness to come to terms with the present; in a society in which the reporting of child abuse, murder and marital violence is now a daily occurrence, there is a good argument for retreating into an illusory state of grace…” (Barton, 1997: 43). It is not surprising therefore, that in the wake of economic collapse there would be an attempt to seek out the utopian values that got lost along the way within the Irish landscape.  As Martin McLoone asserts, “Now that Irish culture reflects the dominant values of secular, consumer capitalism, the deep-lying romantic promise of the landscape seems increasingly attractive (McLoone, 2008: 94).  Although McLoone was referring to films such as Into the West (1992) and The Field (1990), which were produced just before the Celtic Tiger economy, his contention is all the more pertinent in the existential vacuum currently pulling on the Irish psyche.

Silence is a highly ambiguous, narratively episodic film.  Time is not wasted in exposition as  Collins constantly plays with layers of authenticity.  Even though it appears that Eoghan is working within landscapes untainted by human intrusion, the sound reveals otherwise; for instance the sound of a rock breaker interfering with his attempts to capture the pastoral soundscape of rural Cork. Although Eoghan’s odyssey and his conversations with the figures that he encounters seem to indicate nostalgia for the past, Collin’s intercutting of documentary footage is often bleak or brutal.  We are subject to images of island families carrying their belongings to boats bound for the mainland, of a dog being taken out to sea and drowned. But by listening so intently to the sound emanating from the natural landscape, it as though Eoghan is attempting to commune with nature, to listen to Gaia, to capture a past that no longer exists as the siren sound of landscape draws him ever further north.   The intangible atmosphere of the film conjures up the dreamscape of an aisling.  Eoghan is listening to Ireland and lamenting her woes.

Although Silence appropriates many of the themes and subjects traditionally explored in Irish cinema, it also has provenance in British travelogue films such as Gallivant by Andrew Kötting and Patrick Keiller’s Robinson trilogy.  Much like Kötting and Keiller in their picaresque perambulations through the British landscape, Collins uses the conceit of the journey in order to reveal something about or comment on the country and the people who live in it. In this respect Silence also owes a certain debt to the situationists, setting up and presenting situations that allow us, the audience, to critically examine our day-to-day lives in order to recognise our desires. Eoghan is like an acoustic flâneur, enjoying a dérive through the cinemascape, his journey directed by the undulating geography of the film as he strives to encounter an authentic experience free from the noise of modern life. By focusing on the psychogeography and soundscape of the Irish rural scenery, Collins allows the landscape and sound to express Eoghan’s emotion rather than resorting to dialogue or cinematic cliché for explication. The interweaving of environmental sounds, voice and music creates a connection between the past, present and immanent as in the work of Kötting, Terence Malick and Andrei Tarkovsky.

Just as psychogeographers believe that the geography of an environment had a psychological effect on the human mind, proponents of acoustic ecology hold that humans are affected by the sound of the environment in which they find themselves.  Practitioners of acoustic ecology, seek to find solutions for an ecologically balanced soundscape that facilitates a harmonic relationship between the manmade and the natural acoustic environment.  By recording and cataloguing soundscapes in order to preserve and document the changing landscape they examine the extent to which soundscapes can be shaped by human behaviour. Of all of our senses, sound, in particular has the capacity to stimulate our memories, activating associations between fragments of thoughts. The diffuse qualities of sound have the ability to envelop us.  Although we hold the ability to block out sound, we do not possess the physical means to do so.  Our ears are always open and regardless of the quality of our hearing we can still respond to the physical vibrations produced by sound.  Reflecting the fact that sound is particularly affective, filmmaker Alberto Cavalcanti writes “Pictures are clear and specific, noises are vague… that is why noise is so useful.  It speaks directly to the emotions” (Cavalcanti 1985: 109).

Sound can stimulate a feeling, a mood. Walter Murch contends that sound enjoys a primacy over the other senses by virtue of being the first sense to be activated after we are conceived.  While in the womb we are immersed in a reservoir of sound, encompassing the rhythmic sounds of our mother’s voice, her breathing, her heartbeat interwoven with the tumultuous bruit of the outside world.  It can give us the sense of a shared collective consciousness, a sense of connection to the landscape and each other.  Its diffuse palimpsestic qualities allow for a mediation between dreaming and waking states, blurring boundaries between consciousness and unconsciousness.  Collins uses sound as way of negotiating temporalities.  Through his use of asynchronous sound and his strategy of allowing sound to bleed across scenes he provides a way of moving between the past, present and future. The acousmatised voices carried on the wind provide a link to the past, while also foreshadowing events in the future.

Eoghan in his capacity as acoustic documentarian is a passive protagonist. He does not allow the sublime romanticism of the Irish landscape to overwhelm him.  He strives to be an impartial observer, who is trying not to impose his presence on the cinemascape, visually or aurally.  Yet, nonetheless he is an interloper, his very presence with his electronic equipment signifying the intrusion of modern world upon this natural environment.  Eoghan finds it increasingly challenging to document an acoustically pure soundscape untouched by the encroachment of industrial noise.  It is also difficult for him to escape from other people.  Eoghan is drawn into conversations with unnamed characters that he encounters on his travels, allowing them to not only reveal something about themselves and a lost heritage but something about himself as the film progresses.  He comes more talkative and forthcoming the further north he travels, particularly when conversing in Irish.

Silence is a quiet elegiac film, affording the audience time to ruminate on our own relationship with the landscape.  It opens up space for thinking.  Although initially resistant to the idea of returning to Donegal, Eoghan, who for unexplained reasons has not returned home for fifteen years allows we, the audience, to experience the Irish landscape and its associated sounds anew.  This is a unique film in its attempts to re-appropriate the Irish cultural landscape.  Rather than using landscape as a physical space for the locus of action, Collin’s representation of landscape allows him to move towards an engagement with the aesthetic effects of landscape on the psychological state of his protagonist.  The psychogeography is reflecting Eoghan’s psychological journey as he attempts to reconcile his mental and emotional journey home with his actual physical journey.  It demonstrates a shifting dynamic in Irish film.  By withholding information from us, it does not allow for a contextualising of history in the typical sense. Collins allows for ambiguity in order to allow us to make up our own minds.  It is not an outright rejection of modernity, nor is it a lament for an Ireland of yore but perhaps it is significant that Eoghan, the exiled Irish son, finally finds silence, calm and authenticity on his arrival to his childhood home at the close of the film.