Landscapes of Cult and Kingship (2011)

Landscapes of Cult and Kingship (2011)

by Colin Ireland. This text may be archived and redistributed both in electronic form and in hard copy, provided that the author and journal are properly cited and no fee is charged for access. 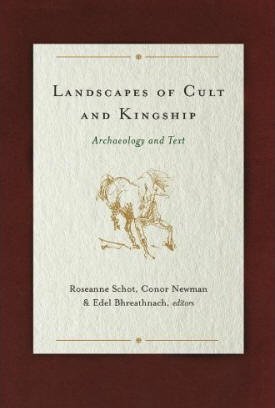 This interdisciplinary volume derives from papers presented at a conference held at NUI Galway on 12-14 June 2009 which had the self-explanatory title ‘Landscape of cult and kingship: archaeology and text’.   Literature produced in Ireland from all ages, whether in Irish, Latin or English, has always been known for its strong sense of place.  In fact, throughout the medieval period an important literary genre has always been dindshenchas ‘place lore’.   A large purpose of this conference, and hence of this volume, is to highlight the importance of place from pre-historic through early modern times.   The potential time span in these discussions is immense, stretching from c.4000BC to works written after 1800AD (p.xii).  This volume achieves its goal by examining the archaeological evidence from diverse sites, typically those having to do with kingship, throughout Ireland and comparing, where possible, what texts of various ages have to say about these easily identifiable places on the Irish landscape.

Among the obvious results that emerge from this approach is the need to identify a continuum from ancient pre-history well into the recent historical past at these various geographical sites.   That continuumstretches from a pagan past that cannot be accurately reconstructed through to a historical past recorded in texts created through literacy introduced with Christianity.  So, for example, sites that from written texts we know to have been important sites for royal inaugurations, commercial fairs and other social gatherings crucial to the maintenance of social fabric, can also be shown to have profound significance deep in the archaeological records for centuries, and sometimes for millennia, before the sites are recorded in the written texts.

While the continuum of these sites is obvious from examinations of the archaeological records and textual evidence – over at least a millennium in the case of written records – this continuum cannot be confused with a cultural continuity from the pre-historic, pagan period into the literate, Christian era.   The archaeological evidence frequently makes clear the shift in the nature of the sacrality afforded a site during the different phases of its existence.   So, for example, a site that began in the pre-historic archaeological record as a burial site or cemetery on a promontory, may continue to have a function in the historical period as a place for the inauguration of local chieftains.  When one remembers that early Irish texts depict a royal inauguration as a marriage or coupling (banais) of the king with his feminine kingdom, a major aspect of this sense of place in Irish culture becomes obvious.  The sacrality of the inauguration site may have continued from the pre-historic period, but the function has shifted in the historical period.

For readers of Estudios Irlandeses the essays dealing with Irish texts will almost certainly have a more immediate interest than those dealing with archaeology.   Several of the contributions explicitly combine textual and archaeological evidence.   But it is through the archaeological record that we best indentify the continuum of these important ‘places’ on the Irish landscape.

The first essay by Marion Deane, ‘From sacred marriage to clientship: a mythical account of the establishment of kingship as an institution’, uses the Old Irish text Compert Con Chulainn ‘The birth-tale of Cú Chulainn’ to show how the narrative trajectory of some early Irish tales must be read at various levels and that certain passages are multivalent.   A passage superficially about the marriage of a couple may be read at another level as guaranteeing the fertility of the land, and the relationships between these characters can be read as a marriage or as a form of clientship.  Such a close reading of a polysemic text deepens our appreciation for early Irish narrative and its relationship to the landscape.  Conor Newman in ‘The sacral landscape of Tara: a preliminary exploration’ relies on an archaeological approach to show the richness and concentration of remains in the area around Tara and argues that the entire local landscape was loaded with significance.   Muireann Ní Bhrolcháin in ‘Death-tales of the early kings of Tara’ shows the significance of place-names on the landscape with relation to the kings of Tara and where they met their ends.   Some of these kings are mythological, others legendary (i.e. semi-historical), and still others (e.g. Muirchertach mac Erca, died c.536) fall within the period of historical records.

In her essay ‘Supernatural arts, the landscape and kingship in early Irish texts’ Bridgette Slavin asks the question ‘what is the connection between the supernatural arts and sovereignty in early Irish texts? (p.66)’.   She uses both literary and hagiographical texts to examine instances of supernatural arts exercised by poets, druids and others to shape and alter the perception of the landscape.  Roseanne Schot in ‘From cult centre to royal centre: monuments, myths and other revelations at Uisneach’ examines the ceremonial and sacral centre Uisneach, ‘the navel of Ireland’ in modern Co. Westmeath, by examining both the archaeological record and written texts, and displays both the literary and archaeological wealth of the site.  Marie Lecomte-Tilouine’s essay ‘Imperial snake and eternal fires: mythified power in a Himalayan sacred site of royalty (Dullu, Nepal)’ is included as a comparative study showing that clear parallels are found in other far-flung parts of the world.

Edel Bhreathnach’s informative and wide-ranging essay ‘Transforming kingship and cult: the provincial ceremonial capitals in early medieval Ireland’ examines ‘what happened at Tara, Tailtiu, Cashel, Cruachain, Emain, Uisneach, Tlachtga, Dún Ailinne and Carman between AD600 and 1200 (p.126-7)’.   Simply listing these major ceremonial sites is a clear reminder of the cultural depth to be found in the landscape anddindshenchas of Ireland.   Bhreathnach concludes by stating that her essay ‘offers the initial steps towards an understanding as to how changes in early medieval Irish society and institutions influenced the use and physical development of the royal provincial capitals of Ireland (p.148)’.  Brian Lacy in ‘Three “royal sites” in Co. Donegal’ examines the Gríanán of Aileach, Tullaghabegley, and Croaghan Hill, all local royal sites within the county of Donegal, and reminds us that these local sites existed and functioned much as did the larger regional royal sites of Tara, Rathcroghan (Cruachain) or Knockaulin (Dún Ailinne).  The cooperative effort by several people from several institutions is a good reflection of the interdisciplinary thrust of this volume of essays.  Elizabeth FitzPatrick, Eileen Murphy, Ronan McHugh, Colm Donnelly & Claire Foley joined forces to produce ‘Evoking the white mare: the cult landscape of Sgiath Gabhra and its medieval perception in Gaelic Fir Mhanach’, a study that relies on archaeology and textual analysis to show the sacral significance of some local sites in Co. Fermanagh that are, of course, paralleled at the major regional sites elsewhere in Ireland.

John Waddell in ‘Continuity, cult and contest’ emphasizes the notion of a continuum in usage at various ceremonial sites, concentrating specifically on Tailtiu (Teltown), Co. Meath, and Cruachain(Rathcroghan), Co. Roscommon.  Ger Dowling’s ‘The architecture of power: an exploration of the origins of closely spaced multivallate monuments in Ireland’ is an inquiry into the purpose and function of the closely spaced ditches and ramparts that encircle many sacral sites associated with burial and ritual in Ireland.  Kay Muhr works for the Northern Ireland Place-name Project and her contribution ‘Place-names and the understanding of monuments’ comes closest to any of the other essays in this volume to being a modern example of dindshenchas ‘place lore’ itself.  Her study limits itself to sites found in Northern Ireland and relies on a wide variety of sources to explain the names of the sites.  Ann Dooley in ‘The inauguration ode?’ examines bardic poems of minor families from the late medieval period to address the question in the title.  Among her conclusions is the argument that some of these poems were as much a prediction of future status as a confirmation of that status.

This volume makes an important contribution to our understanding of Irish cultural history and how the land of Ireland itself blends with and is represented in the rich literary heritage.  Several of the contributions are well illustrated with photographs and helpful maps, and the colour plates at the centre of the volume add to the visual appreciation of these disparate sites and their cultural history.   There is good cross-referencing from article to article within the volume and the bibliography at the back of the book is inclusive of all references used from all the articles.   The indices at the back of the book are very helpful to anyone researching these rich aspects of Ireland’s cultural history with a place-name index, a personal-name and collective-name index, and an index of sources.  The editors deserve our gratitude for their efforts in bringing this interesting interdisciplinary volume together.