by Hedwig Schwall. This text may be archived and redistributed both in electronic form and in hard copy, provided that the author and journal are properly cited and no fee is charged for access. 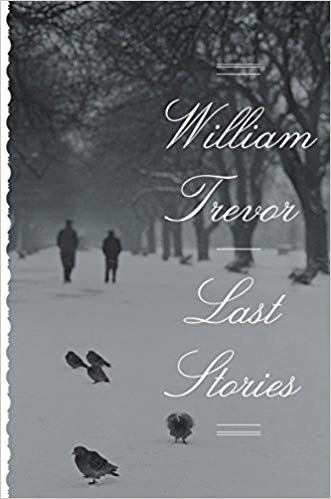 In his Last Stories which were published almost two years after his death, Trevor shows he kept up his master’s craft till his last volume. The overall theme is, as usual in Trevor, a strong rootedness in the past and the characters’ prevarication in wanting and not wanting to know. The result is inertia resulting in a status quo or a lack of empathy leading to tragedy; sometimes the inertia compounds the lack of empathy. Only two stories stand out as being different, the second and the second to last: in the former, the female protagonist seems to have taken physical action (killing “The Crippled Man” of the title), in the latter she gives the decisive psychological push to resolve the situation.

The opening story, “The Piano Teacher’s Pupil”, is a typical example of Trevor’s reticent protagonists. The pupil is a very gifted player but he is also a kleptomaniac. Though the boy steals something on each occasion, Miss Nightingale does not comment on it but it makes her wonder whether maybe she has misinterpreted everybody in her life: “If a lonely father had been a calculating man it mattered less now… She had been the victim, too, of the boy who had shown off to her … She had been the victim of herself, of her careless credulity, her wanting to believe what seemed to be” (9). In the third story it is Anita’s inertia and lack of empathy which causes the sad end: her anger with her friend Claire, who became one of Anita’s husband’s lovers, does not allow her to accept Claire’s offer of friendship after Gervaise’s death. In the next story again a lack of empathy is compounded by inertia. On the one hand there is Mr Ravenswood, a customer in the bank where Rosanne works, who invites her to dinner. Later he confesses to her that his wife died because of his reckless driving, but Rosanne is so overwhelmed by the riches in his house that she does not pay attention to the man’s needs for unburdening his conscience. On the other hand, Rosanne’s partner Keith pushes her to get money off him, and she cannot extract herself from him. “Mrs Crasthorpe” is Trevor’s version of Joyce’s “A Painful Case”, as Etheridge does not give Mrs Crasthorpe much attention, though he is somewhat intrigued by her. Yet Trevor’s character has her own drama, as she is split between her desire for a cultivated life and her penchant to love a “persistent offender”. The sixth story, “The Unknown Girl” I find the most subtle. Here, Trevor whirls oppositions and parallels into a tight little drama, in which the three main actors represent degrees of empathy. Mrs Harriet Balfour, widowed but consoled by the company of her son and the objects in the beautiful house which keep the happy memories of her husband alive, is a smooth, cautious and socially committed being. She is informed by a soul-searching cleric that “the unkown girl”, her former cleaner, died in what seemed a case of suicide. In the following months the discrepancy between the humble cleric who is tormented about not having been able to help the girl and Harriet’s son, Stephen, who turns out to be a ‘clinical’ paediatrician who refused help, brings the revelation that the cocoon she offered her son was maybe not the right way of life. The next story, “Making Conversation”, stands out a bit oddly, hinging on a protagonist whose actions are dictated by a strange combination of pity and revenge. In her youth, Olivia had felt slighted by a man who, pitying her, had “made conversation” with her. Now Mrs Vinnicombe comes to claim her husband back from Olivia, but she merely makes conversation with the woman. Like Claire in “The Caffè Daria”, Mrs Vinnicombe is much more generous in her emotions than the protagonist.

The remaining three stories are all built on a chiasmus. The painter of “Giotto’s angels” meets a “woman with a brooch” who gives the protagonist work and a workplace while Denise, a poor prostitute, steals all his money from him, but then thinks of going back and starting a life of companionship with him. Likewise, “An Idyll in Winter” shows a chiastic development of the main characters. First Anthony, Mary Bella’s private tutor, teaches her to use her imagination. Later, when he leaves his family to come and live with her, it is Mary Bella’s imaginative sympathy with the deserted family which will reverse the situation. The final story, “The Women”, doubles the sets of complementary characters: on the one hand there are Miss Cotell and Miss Keble; the first has known love but has given her child in adoption, the second hasn’t had a deep relationship but “knew that it was she, in the end, who ordered their lives and wielded power” (198). On the other hand, there is the rich Mr Normanton and his daughter Cecilia who starts surmising that she is adopted; but the more he opens up, the more she retreats into her inner self, so that the situation finally remains undisclosed.

The writing is vintage Trevor, as I will briefly illustrate in this volume’s themes and style. The overarching theme is the family; but, like in Trevor’s other collections, religion is mentioned too. Usually Trevor’s stories either criticize the institution (“Of the Cloth” in The Hill Bachelors (2000), “Justina’s Priest” in A Bit on the Side (2004), “Men of Ireland” in Cheating at Canasta (2007)) or they focus on a more mystic personal attitude (as in “The Virgin’s Gift” (The Hill Bachelors) or “The Dressmaker’s Child” (Cheating at Canasta). In Last Stories, “Giotto’s Gift” combines the two strands, as the amnesiac painter of saintly topics is considered a potential paedophile, while he is not in the least interested in sex or money, only in his painting of angels.

Like in previous volumes the stories are linked by motifs, techniques and style. A recurring motif in Trevor is how people are determined by their past. Miss Nightingale sees her life as a series of relations of which she was the victim; Anita’s sense of being wronged in the past stands in the way of forgiveness and friendship; Stephen’s ingrained caution does not allow him to face the plea of “The Unknown Girl”, Miss Keble’s lifelong pent-up jealousy may destroy her friend’s chances to meet her lost daughter. Yet the past is not always unfortunate: Mary Bella “knew … that the past would always be there, around her” (161), but it is positive, an openness reflected in “The big, wide door was as it always had been” (162).

These themes are supported by Trevor’s short story techniques: the way he uses spatial relations, objects, clothes and body language to characterize an atmosphere. Often Trevor uses irony here: the history of “The Caffè Daria” contrasts with the way in which Anita, one of its oldest habitués, behaves; in “The Unkown Girl” Harriet’s “airy”, ever-changing garden contrasts with her son’s room “never changed”, thus reflecting how he is “empty of emotion” (110). Often Trevor’s characters are so tongue-tied that they have to revert to “thing language”, like Claire in “The Caffè Daria”: unable to express her sadness about losing both her partner and her friend, she disappears: “There is no note: the open door said all there was to say” (52).

On the level of style I want to highlight four features Trevor frequently used throughout his work, and does again in Last Stories: the negative phrases, the (ironic) characterization through names, cognitive verbs and the passive voice. “An Idyll in Winter” starts with “Mary Bella didn’t remember when she woke up and then she did: he hadn’t come” (155). As Hermione Lee pointed out about Cheating at Canasta “Typically, it’s a negative phrase, this book is full of things that don’t work [and] can’t be said” (6). In “Making Conversation” it is the names which underline the basic opposition between Mr and Mrs Vinnicombe on the one hand and Olivia on the other. Not only does the married couple get an outstanding family name, they do not get a first name, which stresses the impact of their marital relation. Olivia, on the other hand, gets no surname, and as she sees things merely from her own viewpoint: her partner is but “The man Olivia lives with” (113). Houses too get names: ironically, the home where Miss Keble and Miss Cotell so carefully draw the curtains (on respectively their jealousy and frustrated mother love) “was called Sans Souci” (204). Finally, the cognitive verbs which express doubt (the house painters “guessed and wondered, supposed, surmised” (33) what had happened to the Crippled Man; “Etheridge guessed his way through the mystery of Mrs Crasthorpe” (91)) connect with Trevor’s marked predilection for the passive voice, which entirely fits the author’s exploration of uncertainty. At the start of “The Crippled Man” Rosanne puts on a brave face in her sad situation on the lonely farm, but after the disappearance of the crippled man she tries to efface herself: “The tray was left on the step of the door” (26). Likewise, the women who try to win over Cecilia are very diffident: “Violets were held out to her to smell” (195). It is this “in-between” within a personality which Trevor seems to deem a core thing. Maybe we could sum up Trevor’s image of the human being as ‘a certain prevarication which is a constant element in the changing events of one’s life’? This would tie in with his characteristic combination of cognitive verbs of doubt with his frequent use of the adverb “always”. So Mrs Crasthorpe “… always had. She always would” (88) love the low life; Mary Bella feels she belongs to the farm: “The sun had reached the kitchen… it always does” (180). Rosanne too, knows she is stuck in the “hinterland that was hers and had been all her life” (56) and in her habits: “Her thoughts were full of Keith, as she had known they would be” (56).

There is no doubt that in Last Stories Trevor still proves himself an expert in the charting of micro-shifts in the minds and emotions of (mostly) middle-aged middle-class people. To alleviate the darkness of his protagonists’ struggles I would have hoped the author would have inserted some humour in his stories, but in his consistency and subtlety Trevor is definitely one of the masters of the Irish short story.

Lee, Hermione. “Ghosts of Ireland past … and present”. The Guardian, Saturday Review. 4 August 2007.