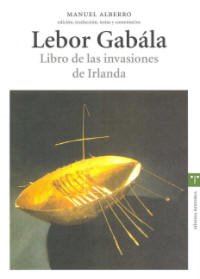 Leabhar Gabhála or The Book of the Invasions has been translated for the first time into Spanish and this by itself is a major event, an outstanding circumstance in the field of Irish publications. It is sad to remark that it has not attracted the attention it deserves.

The book is a medieval compilation written by monks in the 12th century which tells the story of the different groups of people who arrived on the Irish shores in ancient times. It is based on myth and legends passed from generation to generation, but as editor and translator Manuel Alberro says in the introduction, one should not underestimate the importance of mythology in understanding the beliefs of a nation: “Los mitos son una forma de formular explicaciones válidas, pero no necesariamente realistas, de condiciones humanas fundamentales” (10). The editor thus vindicates the power of legends to explain what history cannot really handle: the realm of fantasy and dream, the universe of images and visions which ruled the lives of mankind in times which have fallen into oblivion. Manuel Alberro is probably right when he claims in the introduction that no other nation in the world can compare with Ireland as to the interest displayed by scholars and writers in the recovery of old tales and folklore, and he mentions the tradition of the seanchaí, the archives of the Irish Folklore Commission, and the impulse given by W. B. Yeats to the recovery of old legends. The introduction to the actual translation itself is complete and instructive, informing on the origins of Celtic mythology, its relation to similar sources of ancient wisdom in Wales or in continental Europe, and on the four main cycles of the Irish Celtic sagas, The Book of the Invasions belonging to the first one. There is also precise information on the several manuscripts in which the Lebor Gabála can be found.

The chronicle itself tells the story of the five groups of invaders of Ireland in ancient times: Cessair, Partholon, Nemed, Fir Bolg and Tuatha Dé Danánn, which arrived in Ireland before the last and definite wave – the Gaels or Milesians, the sons of Mil – who completely conquered the island and established themselves there from the coast of present-day Galicia. The narration of the invasions reproduces in Spanish the style of ancient annals, with long genealogical lists that reach back to Noah. It is a tale strewn with primary instincts, sins committed fighting for the land, and there are echoes of the Ancient Scriptures and even of the journeys of Odysseus. The story is engaging in several parts, particularly in everything connected with the voyages of ships loaded with warriors, travelling from distant lands such as Greece, Scythia, Egypt or Spain, towers that are built and later destroyed, epidemics that kill invaders, battles that are won and later lost. According to the Lebor Gabála the first invasion was commanded by Cesair, daughter of Noah, the first woman who attempted the conquest of Ireland “forty days before the Flood”, in an expedition with 50 women and 3 men (one of the males, the text reads, died from “the excess of women”).

The book provides a fascinating account of an evil race, the Fomorians, a caste of half-monsters, always lurking in the margins who engage in battles with the successive groups of invaders, until they are finally defeated by the Tuatha Dé Danánn. As is usual in other medieval manuscripts, the scribes introduced references to Christianity in what is basically an account of heathen myths.

The episode concerning the Milesians and their definitive conquest of Ireland demonstrates the existing connections between the northwest corner of the Iberian peninsula and the Celtic tribes of the North Atlantic regions. From the town of Brigantia, Ith, the son of Breoghan saw a solitary island in the mist, and impelled his tribe to travel there. Subsequent battles are narrated in detail and the presence of Aimirgin, the Milesians’ druid, adds a prophetic tone to the narration. The book ends with a list of notes provided by the editor which connect the legends in the book with proper names, festivities and geographic locations of today’s Ireland. Lebor Gabála, in short, is a valuable and necessary contribution to Celtic mythology and Irish legends for Spanish scholars.