by Allison Macleod. This text may be archived and redistributed both in electronic form and in hard copy, provided that the author and journal are properly cited and no fee is charged for access. 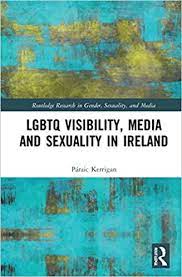 The production and representation of queer identities in Irish media has been the subject of a growing focus in academic literature (Macleod 2018, Holohan 2009, Ging 2008, Walsh 2008, Pettitt 1997). Queer visibility has historically revealed tensions between constructions of nationalism and LGBTQ activism. Irish queerness has simultaneously operated in the service of reinforcing heteronormative boundaries, with non-normative sexuality positioned as “Other,” as well as offering a national re-imagining. Particularly in the 1990s and early 2000s with the Celtic Tiger economic boom, state-funded productions represented a modern Ireland by showing it as a space inclusive of queer identities, albeit those that confirm to heteronormative ideals around respectability and domesticity.

These tensions have also been evident in the struggle for visibility between independent film and television directors and producers, and state-funded production and distribution structures. Especially within film, independent filmmakers have focused on queer characters and narratives to connect sexual dissidence with other forms of non-normative identities and behaviours, and challenge homogenising narratives of the nation that exclude segments of the population in Ireland (Macleod 2018; Barton 2004, Pettitt 1997). At the same time, they have also had to contend with minimal funding available outside of state funding bodies and therefore have had to navigate such representation with institutional pressures.

Existing scholarship on the subject has tended to focus largely on film. Specifically addressing the gap that exists around queer visibility and Irish television, Páraic Kerrigan’s LGBTQ Visibility, Media and Sexuality in Ireland is thus a welcomed addition. Kerrigan contributes to these debates while demonstrating how the specificities of the television medium at once enabled and limited forms of queer visibility.

LGBTQ Visibility, Media and Sexuality in Ireland is divided into six chapters, organised temporally beginning in 1974 and ending in 2007. This progression through time enables Kerrigan to effectively trace changing modes of production and reception practices in relation to key historical moments, including the emergence of the AIDS crisis in Ireland, the decriminalisation of homosexuality, and the Celtic Tiger boom. In doing so, Kerrigan reinforces the importance, already firmly established in academic literature with regards to film, of understanding televisual representation as a reflection of lived society, shaped by the historical conditions in which it was both created and received.

In Chapter 1, Kerrigan sets out the book’s scope. Opening with Declan Flynn’s murder in 1982, and the resulting leniance paid by the court to Flynn’s homophobic attackers, Kerrigan introduces the central tenet that he returns to throughout the book: namely the growing presence of a LGBTQ community in Ireland and the challenges faced by that community to claim space in the public sphere. LGBTQ Visibility, Media and Sexuality in Ireland is situated at the intersection of identity politics and media production. While Kerrigan does focus on textual analysis of specific television broadcasts, he simultaneously focuses on the structures of televisual production and distribution to unpack how the creation and consumption of media content both shaped and challenged the forming of a visible LGBTQ community in Irish society.

The book focuses on queer visibility, encompassing all non-normative identities encompassed under the homogenous labels of “queer” or “LGBTQ”. At the same, as Kerrigan acknowledges, there is a particularly strong focus on gay male material, which is reflective of the content of the archival material and the fact that most gay civil rights organisations have been dominated by men. It is true that images of queer men have tended to dominate representations of queerness in Irish media, largely due to the societal invisibility of other non-normative identities and narratives (Macleod 2018), and this is further reflected in the relative lack of attention paid to those identities and narratives in academic scholarship.

Despite the lack of archival content available, Kerrigan provides strong analysis into the differences in queer identity production looking at lesbian guests on The Late Late Show (LLS) in Chapter 3. It would have added an even more nuanced perspective to do so throughout the monograph; for instance, further unpacking the positioning of lesbian activist Fil Carson with her back to camera in a television broadcast about a queer disco that he examines in Chapter 2.

In Chapter 2, Kerrigan sets out three key television moments that he argues became foundational for queer visibility in Ireland. Using mainstreaming and confessional politics as frameworks for understanding how gay and lesbian activists collaborated with media institutions to represent queer identity on-screen, Kerrigan demonstrates how both the RTÉ, Ireland’s National Television and Radio Broadcaster, and the Irish Gay Rights Movement (IGRM) actively sought to use the media to create a public image of respectability. He simultaneously differentiates what was happening in Ireland from the US, whereby many US activist groups that emerged during the post-Stonewall era were leaning more heavily into confrontation politics. The chapter also makes evident the role of specific key individuals, including David Norris, in helping to advance the IRGM’s mission of normalising homosexuality for the broader Irish public.

Using Last House (1975) and Tuesday Report (1977) broadcasts, Kerrigan shows how the queer subjects in these programmes actively presented themselves as “ordinary”, removed from generic stereotypes of queerness. Alternatively, a broadcast of Week In (1980) took a different approach by showing a gay couple in their home in Cork, simultaneously representing queerness in “safe,” heterodomestic terms for the mass audience while also signifying to queer spectators the possibility of living an out life in Ireland rather than being forced to migrate elsewhere. Kerrigan effectively connects all three programmes together by their attempts to normalise queer identities for public consumption in order to drive a political agenda around assimilation.

Across film and television, Irish lesbianism has historically been subject to the pressures of compulsory heterosexuality, either rendered invisible on-screen, framed as a response to male rejection or sexual abuse, or produced as a male fantasy (Holohan 2009, Walshe 1997). In Chapter 3, Kerrigan focuses on how three specific broadcasts of the LLS in the 1980s offered queer visibility while simultaneously demonstrating the limitations of queer activists to control the terms of their on-screen representation. The first two broadcasts, one featuring activist Joni Crone and the other having two lesbian ex-nuns as guests, showcase how the LLS production team, and host Gay Byrne, used lesbian figures to generate controversy and ratings. Kerrigan further unpacks how the liveness aspect of the LLS put these guests into positions of vulnerability, as they were put on the spot with questions designed to insinuate they were gay by default.

Kerrigan then uses the third broadcast to demonstrate how those conditions of liveness simultaneously enabled activist Kieran Rose, in a televised debate with the leader of a right-wing group, to challenge his prejudiced views with regards to homosexuality. By keeping a calm and measured performance to offset his counterpart’s increasingly emotional outbursts, Rose was able to position homosexuality as a human rights issue and frame the other man has harbouring an extreme prejudice. In this example, Kerrigan demonstrates how queer activists were increasingly learning how to use the televisual medium to further their political agenda and challenge dominant preconceptions of homosexuality.

Chapter 4 is arguably Kerrigan’s strongest chapter. Here, Kerrigan effectively unpacks how the AIDS crisis disrupted earlier mainstreaming attempts where queer visibility was the primary goal. As the AIDS crisis, fuelled by misinformation and fear-mongering tactics, gathered growing media attention and drove increasing levels of societal panic, such visibility became contrary to a progress narrative. Kerrigan argues that the positioning of AIDS, and gay men, as threats to Ireland not only challenged earlier attempts at respectability via mainstreaming narratives but also presented a threat to the ongoing political efforts at decriminalising homosexuality in the European Court of Human Rights.

In response to the sensationalist and dooming AIDS narratives presented by Irish broadcasters, gay activist groups formed a collective resistance by focusing on AIDS education, presenting factual evidence and advice. These groups simultaneously had to battle against media representations of queer visibility as publics that were endangering greater Irish society. Chapter 4 not only reveals the strategies taken by these groups to protect the queer community, but also reveals the limitations of applying a linear narrative of progress to queer history and visibility, as many of the perceived gains by LGBTQ activists prior were subsumed by an AIDs narrative that doomed and villanised in particular gay men.

Chapters 5 and 6 both investigate the impact of globalisation on Irish television and queer activism. Chapter 5 begins with the “gay moment” that was taking place across the USA and UK in the 1990s, represented by Ellen DeGeneres’ coming-out moment on her television show and the coming-out of character Zoe Tate on the popular soap opera Emmerdale. The greater cultural visibility of queerness, coupled with the decriminalisation of homosexuality in Ireland in 1993, suggested significant progress in the social and legal status of queer minorities. And yet, as others have noted, this period in Ireland has been characterised by an unease of how to negotiate the changing dynamics of Irish identity in relation to processes of globalisation. In film, these shifting identity politics resulted in greater visibility of non-normative identities, but the contours of this visibility were often shaped by conservative ideologies (Macleod 2018, Ging 2008).

Kerrigan argues for a similar trend in Irish television. While the post-decriminalisation climate resulted in the RTÉ bringing queer characters into its programming, specifically in the sitcom Upwardly Mobile and the soap opera Fair City, these characterisations presented queer identities in ambiguous and desexualised terms. For Kerrigan, this tension underscores the significance of these texts, as they simultaneously enabled a new form of queer visibility within mainstream fictional programming while demonstrating the “tug-of-war dynamics” of queer identity politics.

Chapter 6 extends on arguments put forth in the previous chapter to investigate queer visibility in the era of the Celtic Tiger in the late 1990s and early 2000s. During this era Irish queer visibility became subsumed within an international media environment, engendering new forms of queer visibility that not only reflected global media trends but also spoke to an international audience. Kerrigan argues that as the RTÉ faced growing domestic competition for viewers, it focused on incorporating and mainstreaming queer identities and narratives into their programming.

There is a large body of existing work that explores how Celtic Tiger discourses of consumerism and globalisation shaped queer cinematic representation, by either presenting non-normative identities as global citizens encompassing a form of “hip hedonism” or else using queerness to highlight fissures within the Celtic Tiger narrative of success (Macleod 2018, Holohan 2009, Ging 2008, McLoone 2007). Kerrigan’s work dovetails with this trend, with his case studies The Clinic and Proof each representing one end of this spectrum.

Throughout LGBTQ Visibility, Media and Sexuality in Ireland Kerrigan effectively reveals how Irish media has been both a facilitator and regulator of queer visibility in Ireland. While it has at once allowed queer identities and narratives to become visible to Irish audiences, it has simultaneously sought to control the framing of such representation to varying degrees.

Kerrigan also brings attention to key cultural texts that have in many cases been overlooked in academia and, in doing so, further enriches the body of work that exists on Irish queer scholarship. It might have been beneficial to also include texts beyond 2008; given the changing role and format of television over the past 14 years, as well as the significant political milestones (for instance, the 2015 Marriage Equality Act and the 2015 Gender Recognition Act), there was an opportunity to examine how the politics of visibility have evolved as traditional televisual structures have become increasingly complicated by streaming services and social media.

However, overall LGBTQ Visibility, Media and Sexuality in Ireland is a strong, and welcomed, addition to scholarship on queer Irish media. It would be a useful addition to courses on Irish film and television as well as Irish queer studies.